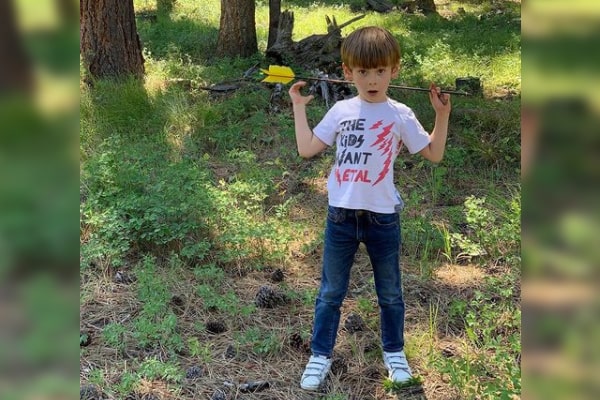 Lindsay Price and Curtis Stone are one of the most celebrated couples in Hollywood. The pair have been sharing their PDAs and are the #couplegoals since 2009. They not only grew old but built their career and family together. As of now, the Stone family is a solid combination of four personalities under a roof. An actress mother, a chef father, two little boys with personalities of their own, and two beautiful dogs, Curtis Stone and Lindsay Price’s home, now seem complete.

Moreover, Lindsay and Curtis love parenthood, which is why they couldn’t wait to welcome Emerson Spencer in less than two years of giving birth to Hudson Stone. Furthermore, Hudson and Emerson share an uncanny resemblance with their mother. Besides, the pandemic situation must have brought them closer than ever. Therefore, here we shall be looking into Lindsay Price’s son, Emerson Spencer, with her husband, Curtis Stone. Hope you’ll enjoy the extra dose of knowledge.

Second Born In The Family

The Stone couple announced their second pregnancy with great enthusiasm in May of 2014. Lindsay was spotted fueling up her care sporting a visible baby bump in Studio City. Moreover, Lindsay Price’s son, Emerson Spencer Stone, was born on September 16, 2014, weighing 7lbs, 11oz. She also shared a few tiny Emerson’s pictures and her husband, Curtis introducing the newest member to their son, Hudson.

Lindsay Price’s husband praised her for being the most beautiful mother, and seeing her bond with her sons is very adorable. Likewise, Emerson is growing up in his actress mother and chef father’s safe arms, along with his growing brother. He shares a special bond with all three of them, and being the youngest in the family, Emerson receives all the love in the house.

Similarly, Lindsay Price’s son with Curtis Stone, Emerson Spencer, started kindergarten via home during the pandemic. Emerson’s mother, Lindsay, often uploads his pictures with fun captions and showers love in an unorthodox manner. The blonde hair and dark-eyed boy, Emerson Stone, will undoubtedly become a heartthrob in his days. Thus, we cannot wait to see him on Instagram alongside his brother and in a thriving career.

Moreover, Lindsay Price’s Instagram is also turning into Emerson’s stan page as she cannot help but upload goofy pictures of the Stone siblings. Thus, let’s hope the band continues to grow stronger in the future. But did you know Emerson Stone’s parents, Lindsay and Curtis Stone are together since 2009?

Emerson Spencer’s Parents Are Together Since 2009

Aforementioned, actress Lindsay Price and chef Curtis Stone are together since 2009. Emerson’s dad and mom started dating in late 2009 and welcomed his brother Hudson Stone, in 2011. There are not many details about their relationship, but their love and dedication for one another are inevitably evident.

After years of dating and a son, Lindsay and Curtis finally decided to walk down the aisle on June 8, 2013, after a year of engagement in July 2012. They gave one another enough time to think, then re-think of their courtship.

As grand as the wedding was, Emerson Spencer’s parents live a more elegant life enjoying blissful marital and parenthood. Moreover, Price’s son, Emerson, is also growing up into a fine lad and might as well follow her footsteps in the coming days with those beautiful looks. Therefore, let’s remain hopeful to see more of Emerson Spencer Stone’s growth and career in the coming days.

The name Emerson has a German origin, which means ‘son of Emery.’ Similarly, Spencer means steward of administrator and has British heritage.