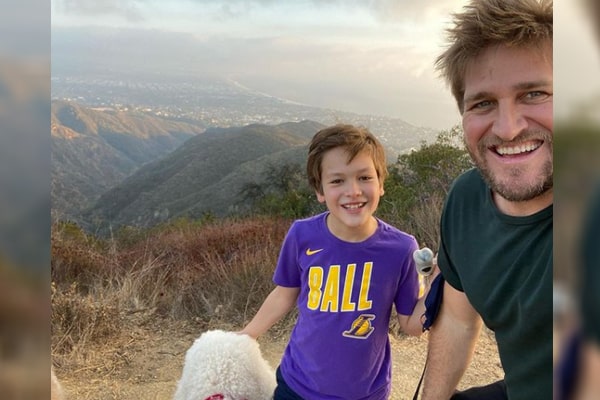 Lindsay Price is an actress known for her role in Beverly Hills,  All My Children, and The Bold and The Beautiful. Besides acting, she is also a singer, a housewife, and a doting mother.

Tales of Lindsay Price’s marriage with Australian chef Curtis Stone float around with great admiration. The power duo has been together since 2009 and welcomed two sons together. Among the two boys, here we shall talk about Lindsay Price’s son, Hudson Stone. The Stone couple decided to walk down the aisle only after experiencing parenthood. Thus, let’s walk through the life of Hudson Stone.

Aforementioned, Lindsay Price and Curtis Stone welcomed their first child, Hudson Stone, on November 6, 2011. Australian chef announced the arrival of their child via Twitter. Curtis wrote that he and Lindsay were excited to welcome their sweet baby into the world. He further added about his excitement to be a dad.

The Stone couple was very excited to start a family together and announced their pregnancy in June. Similarly, they celebrated the baby shower with costars of past and present in October. They further revealed that they knew the sex of their baby but preferred to keep it hushed.

Lindsay Price’s son, Hudson, is an adorable child and incredibly charming. She shares several Hudson pictures, so look at this post and tell us, who wouldn’t fall for this distinguished gentleman? Hair partially swooped away from the face, doe-eyes, buttoned nose, and broad smile makes him irresistible.

Moreover, Lindsay Price’s eldest baby boy shares an uncanny resemblance with her. As of now, Hudson is growing up gracefully alongside his younger brother, Emerson Spencer Stone. The Stone siblings have two years of differences and thus are like friends more than brothers. Moreover, the global pandemic must have deepened the relationship between the two.

Likewise, Lindsay loves her baby boy and celebrates important days gloriously. Furthermore, Hudson is growing up to become more compassionate and loving with his brother in the arms of famous parents. Curtis and Lindsay’s goofy kid started his third grade in 2020 and must be very excited for the virtual classes. He not only studies books but is extremely in touch with nature. Hudson goes fishing & hiking with his father. Similarly, his parents’ efforts to keep him close to nature and authentic living is pretty commendable.

Well, we will have to wait if Lindsay Price’s son, Hudson Stone will follow her footsteps in Hollywood or turn towards his father’s love for culinary. What do you think? Don’t forget to mention your thoughts in the comment section. Meanwhile, why don’t we go through Hudson Stone’s parents’ marriage?

Hudson Stone’s Parents Got Engaged A Year After His Arrival

Hudson Stone’s parents have set the bars high for him when it comes to relationship commitments. His parents began dating in late 2009 and are inseparable ever since. The Stone couple never shied away from sharing their love and are ideal parents.

Aforementioned, Lindsay Price gave birth to Hudson before marriage. The pair were very excited about expanding their family. Both Beverly Hills actress Lindsay and Australian chef Curtis Stone took plenty of time before deciding to get engaged in July 2012.

After a year of being engaged, the Stone couple finally exchanged vows on June 8, 2013, at the Hilton Sa Torre Mallorca Resort in Spain. Moreover, the guest list in the intimate yet posh wedding included Price’s former co-star, Tiffani Thiessen, and Brady Smith.

After a year of the wedding, Lindsay gave birth to Hudson’s younger brother, Emerson Spencer, in 2014. Lindsay Price’s husband, Curtis Stone, wants to broaden his family, but she seems to have closed the curtain. Well, we might certainly hear more if Hudson’s mother is due to deliver his sister. Therefore, let’s hold on to our hopes until we hear more about Hudson and his whereabouts in the coming days.

The name Hudson means son of Hudde and has English origin.