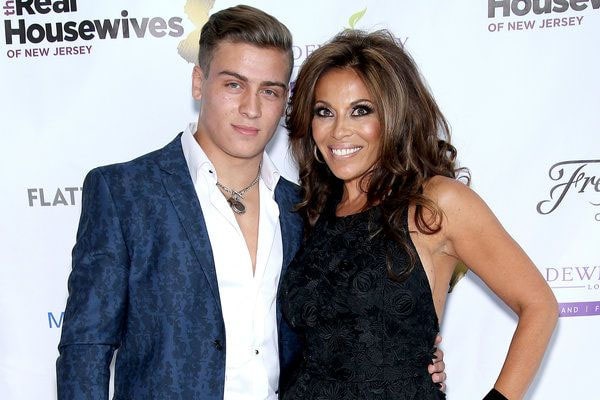 Frankie Catania is the oldest son of the reality TV star Dolores Catania, born on October 8, 1998. He is an actor, model, and reality TV star, just like his mother. Besides Frankie, Dolores has a daughter named Gabrielle Catania.

Speaking of Frankie’s mother, Dolores, she is a celebrity who is famous for her appearance in The Real Housewives of New Jersey. The series starred Antonia Gorga‘s mother, Melissa Gorga, and Christian Staub‘s mom, Danielle Staub. Frankie and his sister were introduced during the rookie season of RHONJ. Later, Frankie left the show to pursue his dream of becoming a model and actor. So, let’s have more detail about him and see what’s Frankie up to.

Dolores Catania’s son Frankie Catania was approached with the opportunity to star as a model. It was first pointed out by his mother in the reality TV show RHONJ. Since then, Frankie has been seen in many advertisements for Calvin Klein.

Besides modeling, he is also interested in acting. In an interview, Frankie’s mom, Dolores, stated that he used to play football when he was young but could not become as big as his fellow mates. One day Frankie came up with a dropping lip and said to her; he wanted to become an actor.

Moreover, Frankie’s mother, Dolores, had a key role to play in making her son an actor. Dolores hesitated at first, but when Hollywood came looking for him, she took him to L.A. Later on, Frankie joined Michael Luggio, an acting school to learn more about acting.

Dolores Catania’s eldest child, Frankie Catania, has come a long way since we last saw him in the reality show RHONJ. His mom is really proud of him, and she proudly shows it to the world. More to that, Dolores has uploaded multiple posts regarding her son Frankie where she has clearly stated; she is so happy to see her son, and he grew up to become a hard-working man.

So proud of @FrankieCatania for never giving up on his dreams!! pic.twitter.com/oLuhCCiG87

Besides being an actor and a model, Frankie is also a fitness freak like his father, Frank Catania. He is really ripped, and he never feels shy to show off his incredible physics. From an early age, he was really into bodybuilding and he has also won the 2nd place in the Teen Nationals. Frankie also inspires people to live a healthy life through his Instagram account.

Furthermore, Dolores’ son Frankie has been featured in the book cover of Good Time Publishing. In the cover, it was mentioned that he had no time to waste as he was training for the National Men’s Physique.

Frankie really is a dedicated man. Even though there were rumors of him dating Gia Giudice, it was never confirmed. It all started when they went to prom together.

Furthermore, Gia and Frankie have uploaded multiple pictures of them on their respective social media. Frankie’s mother went on and said that she would be really happy if the two got married someday. However, Gia and Frankie settled down to become the best of friends.

Frankie Catania is the only son of Dolores and her ex-husband, Frank. So, it’s obvious that he shares a lovely bond with his parents. As a brother, ”he is really supportive and supports my every decision,” says Gabrielle. Frankie and his sister have moved passed the reality show RHONJ and have made their own career.

It seems like the family does not meet often. So as per Frankie’s mother, Dolores, ”having kids home after a long time and sitting together having dinner is the best.”

Talking about Frankie and his parents’ relation, he is very close to them. Neither of his parents ever forget to wish him a happy birthday. Even though Frankie’s parents have decided to go their separate ways, the family of four can often be seen having dinner together.

To conclude, there comes a time in every family when none is happy with together, and one wants to go their separate way. But in the end, it’s a family that comes to your rescue. Family is a blessing, not a curse.