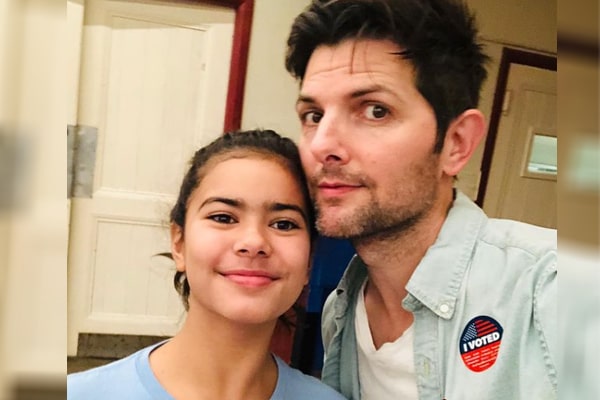 Adam Paul Scott, best-known as Adam Scott, is an American actor, comedian, podcaster, and producer known for NBC sitcom Parks and Recreation. The two times nominee for the Critics’ Choice Television Award for Best Actor in Comedy has also appeared on other films and shows, including The Aviator, Big Little Lies, The Good Place, etc.

Besides being a successful name in the entertainment world, the Parks and Recs star is a doting father of two kids with his wife, Naomi Scott. Many are curious to know about the family dynamic of the comedic actor. Therefore, here is everything about Adam Scott’s daughter, Frankie Scott, and her life.

Adam Scott’s daughter, Frankie Scott, was born in 2009. She is the youngest in the family and is pampered by her parents and her older brother, Graham Scott. Furthermore, Adam Scott’s baby girl, Frankie, is daddy’s girl, but she also loves her mom, Naomi, and has a strong bond with her brother.

Adam Scott’s daughter, Frankie, is a tough cookie and isn’t swayed easily. Although Scott has a victorious career, he revealed that he couldn’t persuade his kids to watch Parks and Recreation. While both Frankie and her brother, Graham, love comedy shows like ‘The Good Place’ and ‘Superstore,’ they have yet to show interest in their father’s works.

Moreover, both Frankie’s parents are filmmakers who have worked on several projects together. But they have kept their relationship and parenthood away from the media scrutiny. Despite maintaining privacy, Adam sometimes opens up about fatherhood on his social media handles and various talk shows. Keeping children away from the spotlight is quite understandable, but we hope Adam Scott continues to share information about his kids in the future.

Aforementioned, Adam Scott’s youngest child, Frankie Scott, is a daddy’s girl. However, she loves to torture her papa. During an interview with Conan O’Brien, he talked about his daughter turning into a burn artist but only focused on him. He further recalled when they were playing 20 questions; she wasted two questions just to set up a burn for her father.

Additionally, Frankie also slid a note in her daddy’s backpack when traveling and insisted on reading it on the plane. Adam was pleasantly surprised only to read ‘You S**k’ and dream of being loved by his daughter shattered in split seconds. While Scott might have exaggerated these incidents a little, it is fair to say that Adam and his wife, Naomi Scott, gave birth to a sassy queen.

Adam’s daughter also caught people’s eyes when he tweeted a photo of Frankie carrying a sign ‘Trump Eats Farts” during the Women’s March in Los Angeles. Moreover, while talking to Seth Meyers, Scott explained that his kids asked if they could join the march. He further continued about how preposterous the policies put forward by the government are and said that his 8-year-old daughter at the time voluntarily asked to join the protest.

Besides loving a comedy show, Adam Scott’s daughter Frankie is aware of politics early on. Therefore, we could anticipate a brighter future for Frankie Scott in the coming days. We wish her all the best for her future.