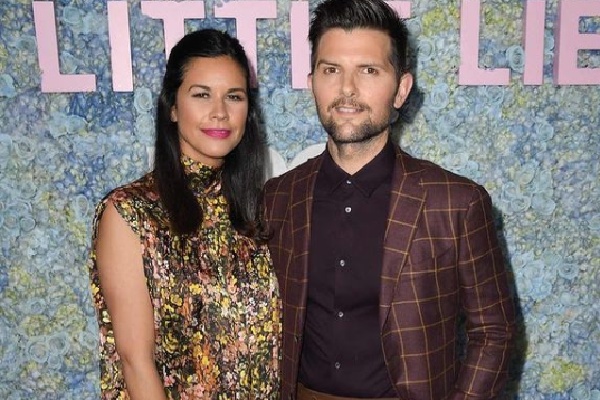 As of 2021, Naomi Scott and Adam Scott have been married for more than 15 years. Image Source: Instagram/mradamscott.

Adam Paul Scott is an American actor, producer, and comedian who started his career at the age of twenty-one. Though the process was really challenging, Adam has successfully marked his name in the list of best actors. Adam is most famous for his work in Parks and Recreation. He earned two nominations for the Critics Choice Television Award for Best Actor in a Comedy Series for Parks and Recreation.

But enough about this wonderful actor, today we will be talking about a special someone who has been by his side through every thick and thin. And that special person is non-other than Adam Scott’s wife, Naomi Scott. Read the article to know about Naomi Scott, aka Naomi Sablan, producer, writer, and a mother of two.

Before talking about Naomi’s ongoing chapter of life, let’s take a look at her early life. Adam Scott’s spouse, Naomi Scott, was born on October 8, 1972. There is not much information regarding her childhood and higher education. But given her profession, we might guess that she studied something related to filmmaking.

But here goes one fact, Adam Scott’s beloved wife Naomi was born as Naomi Sablan. After her marriage, Sablan is mostly recognized as Naomi Scott. However, due to her name, people have confused her with the British actress and singer Naomi Scott, who is best known for playing Princess Jasmine in Disney’s Aladdin.

Now let’s talk about something that Naomi is mostly recognized for, her marriage with Adam Scott. Sources say that the couple met in the late 1990s and eventually started dating. After dating for several years, they got married in 2005.

They like to keep their lives pretty private but are sometimes spotted in public events. Adam also does not forget to share the picture of his beautiful wife on Instagram, time, and again. He really shows how thankful and lucky he is to get a wife as good and loving as Naomi. And as of now, Adam and Naomi have been married for 15 years, breaking the stereotype of celebrity couples’ marriage life.

While it might be new information for some, but Adam Scott’s wife, Naomi Scott, is a producer and has also showcased her skills as a writer. But since her profession requires her to be behind the camera, you might not really know much about her works.

Naomi Scott started her professional career as a unit manager for the film Kissing Jessica Stein in 2001. She even portrayed the character of Seductive Woman at a gallery in the same film. Following that, she got the role of the associate producer for the Jimmy Kimmel Live show. Then she worked as the producer for The Andy Milonakis Show. She moved to movies and produced her first full-length project named Chrissy: Plain and Simple.

Adam Scott’s spouse, Naomi, has also worked as a producer for the movies Alligator Boots (2009) and The First A.D (2011) before starting a production company with her husband. The name of Adam and Naomi’s production company is Gettin’ Rad Production. The production company established in 2012 had already produced great shows like The Greatest Event in Television History, Other People, The Overnight. And in 2015, Naomi was also listed in the list of top ten producers to watch by Variety Magazine.

Naomi Scott Is A Mother Of Two

Adam and Naomi, being married for more than15 years, are parents of two wonderful children- a son and a daughter. Among them, Graham Scott is their first child, who they welcomed in 2007- after two years of marriage. Graham has now grown up to be a teen.

Naomi’s next child with Adam Scott is daughter Frankie Scott. The celebrity couple welcomed Frankie in 2009. The two siblings, Graham and Frankie, are best friends and like to play with legos together. However, the couple likes to keep their children away from the sight of the media. Being a producer by profession, Naomi has a hard time putting things together, but she keeps her family above anything. No wonder Naomi Scott and Adam Scott are one of the most admired couples in Hollywood.