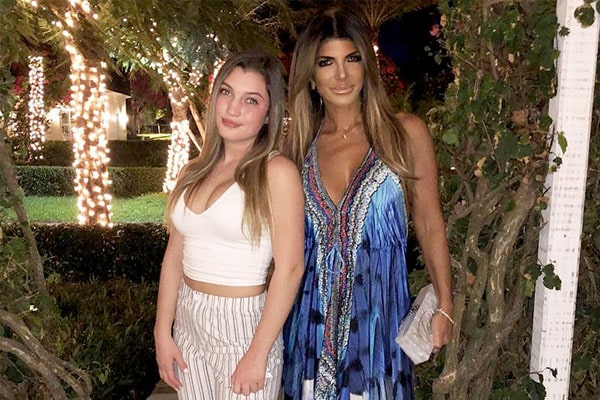 Teresa Giudice‘s daughter Gabriella Giudice was born on the 5th of October 2004. She shares Gabriella together with her husband Joe Giudice.

The lovely pair exchanged their wedding vows in the year 1999. The two love birds are together ever since. Now, let’s get to know more about Gabriella Giudice in detail.

Is The Middle Child Of The Reality TV Star

Gabriella has three siblings named Gia Giudice, Milania Giudice, and Audriana Giudice. Gia Giudice, being the eldest, is the most popular among the fans. She has an Instagram account with almost 567K followers as of December 2019.

Including Gabriella’s parents, all the sisters seem extremely close to each other. No doubt, the family of six share a strong bond together.

A Smile For Her Parents

Gabriella is one of the many reasons for her parents to smile. Of course, it had been a tough time for the Giudice family as they all continued to await the fate of patriarch Joe Giudice. Her father Joe continues to fight his deportation order and couldn’t attend his daughter Gabriella’s 15th birthday.

But, the family celebrated the occasion quite well. Although Joe missed his daughter’s birthday bash, he surely might have given gifts and blessings to his 15-year-old daughter. Not only that but Gabriella’s mother Teresa Giudice also took her IG account to wish her daughter’s 15th birthday on 5th October.

Teresa Giudice had even told that her daughters were the source of inspiration for her during the tough times. She told,

“Even now that she’s away for college, the girls are all still very close. She’s set a great example for them. She’s the real star.”

It has been confirmed that Joe’s request to be released from ICE custody and move to Italy has been granted.

Teresa couldn’t be more proud of her 4 children, all daughters. With the eldest child, Gia already in college, the mother seems thinking for the rest of her daughters regarding their future, including the second eldest Gabriella.

The coming days definitely seems fruitful for Gabriella. According to her mother, she is a high school freshman and is super smart. The mother even told that her daughter is an honor to her class and she could choose any college she wants.

Also, Gabriella seems to be inspired by her elder sister Gia, 18, who has high hopes to pursue her career as a lawyer. Even though Gabriella hasn’t started looking at colleges just yet, she still has plans for further study and that is what her mother is so proud of. Obviously, it is the greatest happiness that every parent wants from their children.

Gabriella is a feminine name of Italian and Hebrew origin providing the meaning of “woman of Gods.”