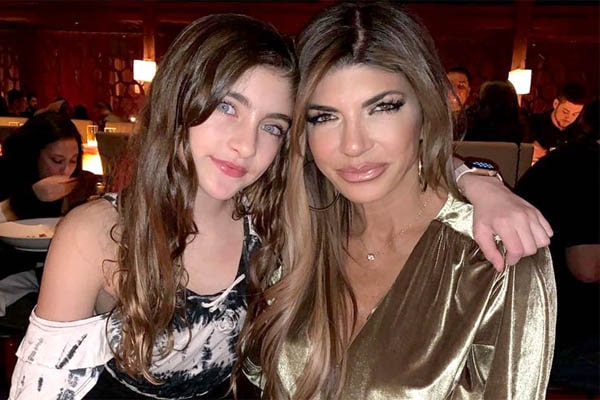 Audriana Giudice’s mother, Teresa Giudice, is a well- known reality TV star. She starred in The Real Housewives of New Jersey, along with Melissa Gorga, Danielle Staub, and Dolores Catania. As for Audriana’s father, Joe Giudice is an Italian businessman and is also one of the stars of RHONJ. Besides, Audriana Giudice’s parents got married back in 1999 and have split after two decades of marriage in 2019.

Teresa Giudice’s baby girl, Audriana Giudice, is an aspiring dancer and has been competing in many dance competitions. Moreover, Audriana shares many beautiful dance moments on her Instagram account, with around 17.7K followers as of January 2020.

As a student of Prestige Academy, she is living her dream as a dancer and shows a beautiful bond with her fellow dance friends.

Audriana Guidice is close to her friend named Amelia, with whom she has been close to since a young age and shows a great bond. They both share the same dreams and are students at Prestige Academy.

Both Audriana and Amelia share a similar kind of Instagram username, isn’t it a friendship goal? They also share beautiful shots of each other in their respective Instagram accounts. Audriana Giudice and Amelia are a portrait of pure and cute friendship.

The aspiring dancer, Audriana Giudice, shares a wonderful relationship with her family members. Scrolling her Instagram account, we can see the family of five traveling to several places.

Even after the separation of Audriana Giudice’s parents, the family is still unbreakable and shows affection for one another.

The cute Audriana’s dad Joe Giudice, an Italian businessman, was sent to prison for mail, wire and bankruptcy fraud. He served for 41 months in the prison and got released on March 14, 2019. Joe’s wife, Teresa Guidice, also served 15 months federal prison sentence. Sadly, during the time of Joe’s imprisonment, Audriana was bullied in school.

Later under the presidency of Donald Trump and invasion of the new law, ‘crime of moral turpitude’ or ‘ an aggravated felony,’ the convicted immigrants were deported back to their country. Despite living in the USA, Audriana’s father didn’t acquire American Citizenship. This is why Joe Giudice was deported back to his home country, Italy.

After the deportation of father Joe, the daughters, along with Mama Teresa Giudice, went to visit him in Italy. Audriana Giudice’s older sister, Gia Giudice, posted a family photo on her Instagram.

Well, we can see that Audriana has a fantastic bond with her parents and her older sisters. She is living her dream as an aspiring dancer. We hope she will grow up to be a talented dancer and live a healthy and happy life.

The name Audriana, is of English origin, which means nobility; strength.