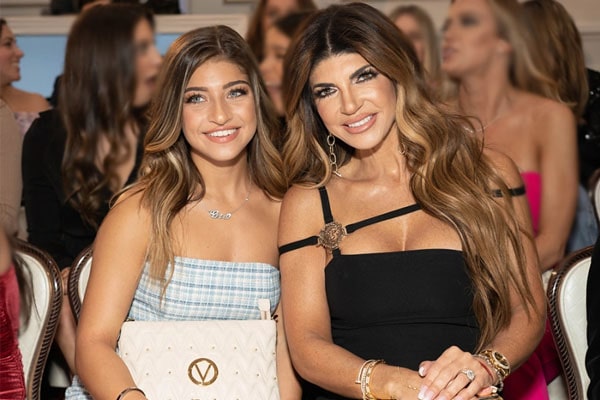 Milania Giudice, Teresa Giudice‘s daughter was born in the year 2005. Teresa shares Milania together with her loving husband Joe Giudice. The adorable couple tied the wedding knot back in 1999 and are together ever since.

Among all of her siblings, Milania really seems interested in music and has even released her first solo album song titled Grow Up. As of now, the music video has reached nearly 420K views on YouTube. She has a self-titled YouTube channel with more than 2k subscribers as of December 2019.

Not only that but Milania also has an Instagram account with 102K followers. She is very active on her IG handle and as a matter of fact, Milania mostly uploads pictures of her family including her parents and siblings. It looks like, she is extremely close to her family. No doubt, the sweet family of 6 share a strong bond together.

Gia, being the eldest, is the most popular among the fans. She even has an Instagram handle with 567K followers as of December 2019.

Reality TV personality Teresa Giudice’s daughter Milania has fully supported the petition to Donald J. Trump for her father Joe Giudice’s deportation. The petition was initiated by her elder sister Gia. It has been a really tough time for the Giudice family as they all continued to await the fate of patriarch Joe Giudice.

Joe continues to fight his deportation order but couldn’t be with his wife and daughter. The petition has been signed by more than 104K people and the goal has been set to 150K. She wrote,

My father, Joe Giudice has resided in New Jersey his entire life. He is a businessman, a husband, father to four young women all under the age of 19, son, brother, uncle, and friend to many. He was found guilty of NON Violent offenses and served his time complying with all prison guidelines and procedures.

It has been confirmed that Joe’s request to be released from ICE custody and move to Italy has been granted. Surely, the father couldn’t be more proud of all his daughters.

RHONJ star Teresa Giudice had no way to express her feeling revealing how her daughter Milania is looking and feeling better than ever. As we all know, Yogi Teresa, 47, has never missed her diet and fitness schedule and has always taken the matter extremely seriously. The mother couldn’t be more proud when her daughter Milania Giudice followed the same healthy mantra. Milania dropped a whopping 40 pounds with her Yogi mother helping her kick-up the process.

Mother of four and nutritionist told at the first annual BravoCon in New York City on the 16th of November, “She told me, she’s like, ‘Mommy, can you get me a nutritionist?’

As a matter of fact, the Giudice family is famous for their heavy Italian Sunday dinners with pasta, meat, and bread galore. Of course, some healthy gym schedules with a healthy nutritious diet contributed to Milania’s jaw-dropping new look according to her mother. It is not quite difficult to stay in tip-top shape if you’re a Giudice.

As mentioned before the family had a tough few years as Joe served time behind bars in ICE custody. Although the family has had a lot of hardships, Teresa really had a smile after seeing Milania thriving and channeling her life stresses something that is good for her.

Milania is a female name of Greek and Czech origin providing the meaning of “gracious.”