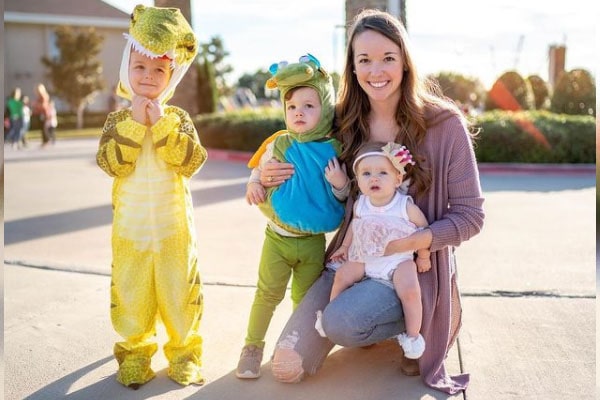 Garrett Hilbert is a proud father of three kids with his long-time partner, Kristen Hilbert, aka Kristin Hilbert. The couple is together since 2005 and exchanged their vows in 2011. Furthermore, the Hilbert couple welcomed their first child in 2015, followed by the other two shortly after.

Well, Garrett is a very-loved member of Dude Perfect, who has won 13 battles overall. Therefore, here, we shall talk about Garrett Hilbert’s children. Every man can birth, but it takes a real serious workout for a man to become a father, and Garrett might as well win the title of the finest father. Thus, stick until the end to know about the loving bond he shares with his babies.

Owen Ray Hilbert, The First Born in The Hilbert Family

Aforementioned, Dude Perfect’s Garrett Hilbert is married to his high school sweetheart, Kristin Hilbert, since 2011. They were together for almost six years since 2005 before exchanging vows.

Frankly, from high school sweetheart turned married couple to build a family of five, Garrett and Kristin are living a fairytale love. The Hilbert couple welcomed their first child, Owen Ray Hilbert, in February 2015, four years after their conjugal.

Garrett proudly announced the arrival of his firstborn through his Instagram. He wrote, “I’m officially a dad! He had already brought so much joy to our lives!” Garrett further thanked Christ for his blessings.

Similarly, Garrett Hibert’s son, Owen Ray Hilbert is very active and athletic from a very young age. He shows interest in sports like golf and makes his parents proud as he excels academically as well.

Kristin’s husband never forgets to celebrate every year of his first-born’s life. Owen is Garrett’s twin as they look so much similar and have many interests in common.

Interestingly, Kristin is away from Instagram, but she must share a strong bond with her son. Anywhoo, Owen’s parents couldn’t wait longer to add a new member to the Hilbert troop, and thus, he became an older brother in 2016.

As mentioned earlier, Garrett and Kristin’s son, Owen, couldn’t enjoy the privilege of being the ‘only’ child in the family. His parents took the bun out of the oven, i.e., Lincoln James Hilbert, in August 2016.

Garrett once again shared the arrival of his second child through Instagram with great enthusiasm. Honestly, he seems to be enjoying fatherhood immensely, or so his caption reflected. He proudly announced the new addition to the Hilbert troop and praised his wife and baby mama for her courage throughout the process.

The following day, Lincoln Hilbert’s father uploaded another picture of him as an infant as he worried children grow old faster. As of now, Garrett’s son is almost five and is having the best childhood with his siblings and amazing parents.

The final member of the Hilbert family is the beautiful Iris Hilbert. Kristin birthed Iris Hilbert on a beautiful spring day in April 2018.

Garrett, Kristin, and their two boys once again welcomed the youngest of the family via Instagram with a beautiful caption that exhibited their excitement. But frankly, Lincoln seemed pretty zoned out while Owen seemed super excited.

Garrett Hilbert’s daughter, Iris, is growing up into a beautiful girl with light hair and a milky face. She is loved by both her brothers and fur-friends.

Well, Garrett Hibert’s children are growing in pleased family background and parents who are madly in love with one another. Similarly, they share a good bond with their parents and will possibly grow up to become successful & kind like them.

The name Owen is a traditional Welsh name that means “young warrior” or “well-born” or “noble.” Similarly, Ray means wise protector and has English origin.