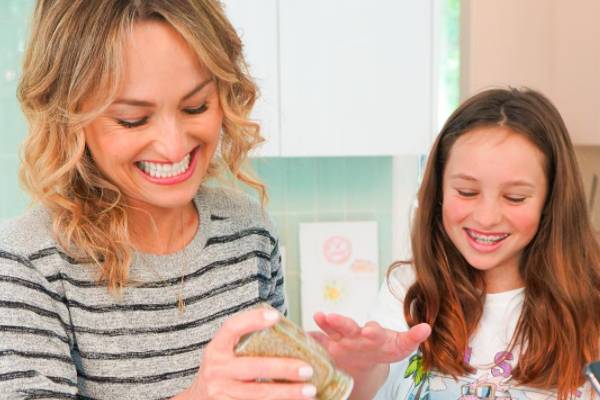 On top of her tremendous personal achievements, the Italian-born chef is a proud mother. Giada De Laurentiis’ daughter, Jade Marie De Laurentiis Thompson, may not have her own Food Network show, but she is a mini-celebrity in her own right. Hence, let’s get to know Jade a little better through this article.

Daughter Of A Celebrity Chef And A Retired Fashion Designer

Giada De Laurentiis brought her daughter, Jade Marie De Laurentiis Thompson, into the world with her ex-husband, Todd Thompson on March 29, 2008. As a matter of fact, Jade is the only child of her parents together.

For the records, Jade Thompson‘s mother Giada met her dad, Todd, then-fashion designer, while the chef was a student at the University of California. Jade’s parents got married in May of 2003 before her mother started her career as a cook.

However, in 2014, Jade’s parents separated, and the couple’s divorce was finalized in 2015. The celebrity cook and her ex-husband continue to co-parent Jade. But Giada has moved on with her life and is now dating television producer Shane Farley.

In 2018, the former duo reunited for Jade’s 10th birthday, and the following year, the ex-couple celebrated their daughter’s graduation. Moreover, the celebrity chef treasures every moment she gets to spend with Jade at home as she grows up.

Jade Has Appeared In Many Of Her Mom’s Shows

If you are following Giada’s shows, you might be very familiar that Jade Thompson has won the hearts of fans and viewers. Giada de Laurentiis’ daughter frequently appears in her shows and steals the show most of the time.

The celebrity chef’s viewers have seen Jade grow from a toddler devouring sugar cookies in season 1 of Giada at Home to a 12-year-old girl helping her mother create a pizza. We know that Jade grew up liking chocolates, sleepover parties, dancing, and singing, just like most other kids, based on glimpses of her in her mother’s social media posts.

Enjoys Assisting In The Kitchen

Jade Thompson isn’t a master chef junior, but watching her bake cookies from a cake mix may inspire you in many ways. Moreover, Giada De Laurentiis’ daughter has her own chef’s knife and has been cooking from an early age. She enjoys baking brownies with her mother, which is one of her favorite sweet snacks.

In addition, the youngster still enjoys helping her mother in the kitchen, which provides an ideal opportunity for a mother-daughter connection.

In addition to appearing on TV, Jade has attended the 2016 premiere of The Jungle Book, the 2019 Daytime Emmy Awards, and many other events with her mother. Not only does Todd Thompson’s daughter joins her mom to different events and premiers but she also likes traveling with her dear mommy. Indeed, Jade Thompson is a fortunate little girl to travel with her mother and witness her in action.

The mother-daughter duo has also become one of the most popular TikTok duos. Giada and Jade use the platform to show off their dancing skills, attempt new cooking hacks, and capture their fun girl’s nights out.

We love the beautiful bond the mother-daughter duo has. And, it seems like Jade found her best friend in her adorable mom.

It’s only natural for people to question if you want to follow in your parents’ footsteps when you’re the daughter of someone as accomplished as Giada de Laurentiis. So, does Jade Thompson, Giada De Laurentiis’ baby girl, aspire to be a chef like her mother? Well, as it turns out, the young girl has a lot more interests than just making delicious dinners.

In an interview, the restaurateur told that her daughter doesn’t share the same passion as her. The cooking show star further added that her little darling prefers to engage in other activities. Jade wants to be a professional horseback rider one day, an Olympic gymnast the next, and a singer the following. It varies on a daily basis. But apparently, cooking isn’t on Giada’s daughter’s list.

We believe Jade Marie De Laurentiis Thompson has a wide range of professional alternatives in front of her if she doesn’t want to become a chef. But whatever she chooses to pursue, we hope Jade finds immense success in it.

The name Jade comes from the phrase “piedra de la ijada” which means stone of the side in Spanish. Also, Giada is the Italian version of Jade.