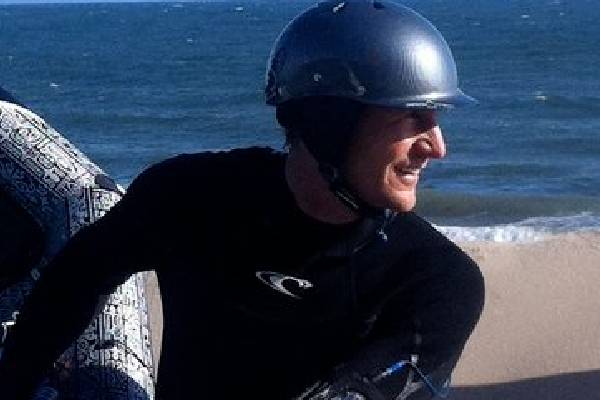 Marriage is difficult, but celebrity marriage is even more difficult when you consider everything that can go wrong in that marital life for the entire world to see. The former fashion designer Todd Thompson and the famous celebrity chef Giada De Laurentiis were once a lovey-dovey couple. The news of their divorce came as a shock to many, given that the former sweethearts have a kid and had been married for almost a decade.

Even though many media still refer to him as a designer, Twitter implies that Todd has moved on from his previous job. Todd’s Twitter bio reads, “Dad, retired Clothing Designer/Manufacturer, Foodie, Sports, Car, and Music enthusiast.”

Had Interest In Fashion Designing From An Early Age

Todd Thompson was born on January 8, 1963, in Michigan, USA. Except for the fact that Todd Thompson’s mother’s name is Mary Thompson, little is known about his family. He shared his childhood with his brother, Trevor Thompson. Similarly, no information about the fashion designer’s various educational institutions is available in the public domain.

About his profession, Todd apparently developed an interest in fashion design throughout his formative years. The Michigan native had made a career out of his hobby. Giada De Laurentiis’ ex-husband has worked as a fashion designer for a number of companies.

Knew Giada Long Before Their Marriage

When Todd Thompson met Giada De Laurentiis, she was a UCLA anthropology major with a very different career path ahead of her. Todd, who is nearly seven years older than Giada, was already well into his career as a fashion designer at the time. However, the celebrity chef hadn’t yet realized that cooking was her true calling.

But Todd Thompson’s ex-wife Giada figured it out quickly enough and went to Paris to study at the renowned Le Cordon Bleu cooking school. Then, the TV personality returned to Los Angeles to launch her culinary career.

After that, it took until 2002 for Giada De Laurentiis to make her television debut. Finally, Todd and Giada exchanged their wedding vows in front of family and friends in an elaborate wedding ceremony in 2003.

The former designer is also known for his admirable support for his wife’s work as a chef and television show host. The well-known ex-stylist also contributed to the design of Giada’s Las Vegas restaurant. He designed the coats used by the restaurant’s chefs as part of his job at the eatery.

Giada De Laurentiis’ Ex-husband Is A Father Of One

As you can see, by the time the former couple married, they were together for well over a handful of years. It is safe to say that the ex-couple had survived such stressful events as college exams, a long-distance situation, career uncertainty, and the sudden success of one spouse.

In March 2008, the now estranged couple had their daughter, Jade Marie De Laurentiis-Thompson. Giada is the Italian translation for Jade; hence, we assume Jade was named after her mother.

Everything seemed to be fine in the De Laurentiis-Thompson household. However, just when you’d think that being married for so long would strengthen their relationship, it was the complete reverse that happened to Todd Thompson and Giada De Laurentiis.

Todd and Giada’s marriage began to endure many setbacks a few years after the birth of their daughter. Unfortunately, it seems meeting her husband so young may have worked against Giada’s chances of having a lifelong marriage.

Giada And Todd Had Many Differences

When then-lovers met, the retired fashion designer knew nothing about cooking and Italian food. Giada later admitted that her then-husband received some criticism from her family. One such incident happened when Todd got invited to Giada’s grandfather’s home for dinner. The chef’s granddad teased her in Italian about Todd’s unusual way of eating pasta.

Giada De Laurentiis added that fortunately, her ex-husband was self-assured enough to never take it to heart. Instead, Todd would laugh it off, and her family grew to adore him as a result.

Though, we are not pointing out these matters to be the reason behind their separation. There were many more factors where the two had completely different perspectives.

Giada’s Career Commitment May Have Impacted Her Relationship

As much as a work commitment is necessary, sometimes healthy relationships require couples to be present, focusing on their partner and children. Looking at Giada’s successful career ahead of her, how Todd Thompson’s ex-wife managed to spend time with her family is a mystery.

After making her television debut in Everyday Italian in 2003, the hostess created a companion cookbook to the series, which was released in 2005. Followed by two more books, a new television show Giada’s Weekend Getaways, and roles as a mentor on Food Network Star and a correspondent for Today. And that was before Todd Thompson’s ex-wife became a mother, which didn’t seem to slow her down at all.

Todd’s former partner produced another culinary series with an accompanying cookbook, Giada at Home, and a merchandising deal with Target in 2010.

We do not have any objections to seeing working mothers dedicated to their work. It only implies that someone with Giada De Laurentiis’ considerable work commitments could find it challenging to be present at both workplaces and home.

Was Todd Thompson’s Marriage Troubled By Suspicions Of Infidelity?

Todd Thompson’s ex-wife Giada made headlines multiple times regarding suspected marital infidelity. The hostess of Giada At Home was rumored to be romantically engaged with Matt Lauer. Matt was hosting the Today show, and the cookbook author appeared on the show frequently. In addition, Giada was again falsely said to have hooked up with pop artist John Mayer.

However, there was nothing true to it, as told by Todd’s former spouse. Hence, we wonder if suspicion, which was led by the media, was the main reason behind the separation of Todd Thompson and Giada.

Well, all the above-mentioned tiny jabs took a toll on the former pair’s marriage, and they filed for divorce in 2014. The former lovebirds separated in July 2014, but their divorce was finalized in 2015, with both sides agreeing to be friendly and co-parent their child.

In addition, Giada paid substantial child support after the divorce. The restaurateur and the former stylist didn’t have a prenuptial agreement, so the latter got to walk away with their $3.2 million home and the art collection valued at more than $300K. Moreover, the ex-couple’s total of more than $2 million in joint bank accounts was also divided.

It is believed that Todd is doing quite well on his own. Moreover, Todd Thompson is currently enjoying his romance with Heather Lacombe. Todd Thompson’s girlfriend is a well-known former model and fashionista.

In addition, Giada De Laurentiis’ ex-husband enjoys spending time with his daughter, and there are numerous photographs of the two hanging out on social media. Hence, we believe everything is going well for the retired clothing designer.