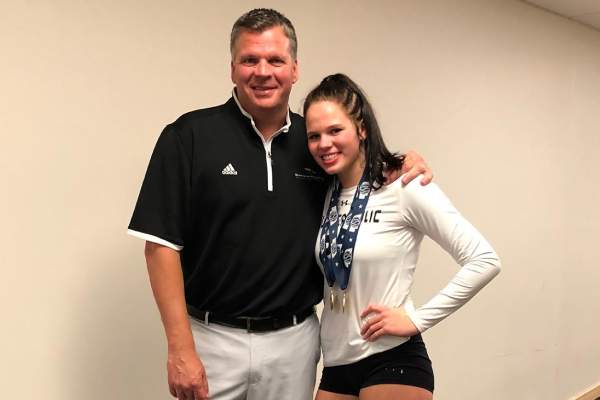 Greg McDermott is an American college basketball coach who serves the Creighton Bluejays men’s basketball team as the head coach. He has been holding the position at Creighton University for over a decade since 2010. He previously worked at Wayne State College, North Dakota State, Northern Iowa, and Iowa State.

Aside from being a successful coach, McDermott is a family man and enjoys a blissful life with his wife and children. However, many of his fans might be unaware of the fact and be curious about them. Hence, today, we will learn about Greg McDermott’s daughter, Sydney McDermott, in this article.

Sydney McDermott was born to the basketball coach and his wife, Theresa McDermott, as their youngest child. She was born in August of 2000 and is currently 21 years old. Sydney will celebrate her 22nd birthday in August 2022. In addition, she has two older brothers, Nick McDermott and Douglas Richard McDermott, aka Doug McDermott.

Greg McDermott’s oldest son, Nick, was born on October 22, 1989. He is now 32 years old and is a scratch golfer and, as per his LinkedIn profile, works as a caddie on PGA Tour. Likewise, Sydney’s second brother, Doug, was born on January 3, 1992, making her about eight years younger than him. He is a popular professional basketball player who competes for the San Antonio Spurs of the NBA.

Being the youngest and the only daughter in the house, Sydney must have received much love from her parents and brothers. The McDermott siblings often post pictures of each other on their social media handles, showing their close bond to the public.

Is A Volleyball Player

As the title suggests, Greg McDermott’s daughter is a very talented athlete. She played basketball and volleyball at her alma mater, Skutt Catholic High School, and was a prominent varsity volleyball team member. Well, it isn’t surprising, considering the gorgeous girl was born into a sports-loving family. Standing at the height of 6′ 1″, she helped lead her school to three state championships in 2016, 2017, and 2018 as a right-side and middle hitter.

Furthermore, in the 2018 state tourney, the 21-year-old earned class B all-tournament and overall all-tournament teams honors. She also received all-state honors from the Lincoln Journal Star and the Omaha World-Herald in 2017. After graduating high school in 2019, Sydney joined Northwest Missouri State University and became a member of the 2019 Volleyball Roster.

However, it appears Greg McDermott’s baby girl has transferred to a different college and stopped playing sports. She is currently an undergraduate student at the University of Kansas’ College of Liberal Arts & Sciences. Moreover, Sydney was announced as one of the thousands of Fall 2021 Honor Roll students.

Is Greg McDermott’s Daughter Dating Anyone?

Well, it is hard to say as Sydney has not been public about her love life. In addition, she has not mentioned anything about her lover on her social media accounts. Instead, the athlete seems to prefer posting pictures with her family and friends. Could it be she is dating someone and keeping it a secret from the public?

There is also a possibility that the volleyball player wants to focus on her studies at the moment. We hope we will learn more about Sydney McDermott’s boyfriend in the upcoming days. Nonetheless, Greg McDermott’s daughter has grown up to be a gorgeous lady and seems to be leading a great life. We wish Sydney all the best in her future endeavors.