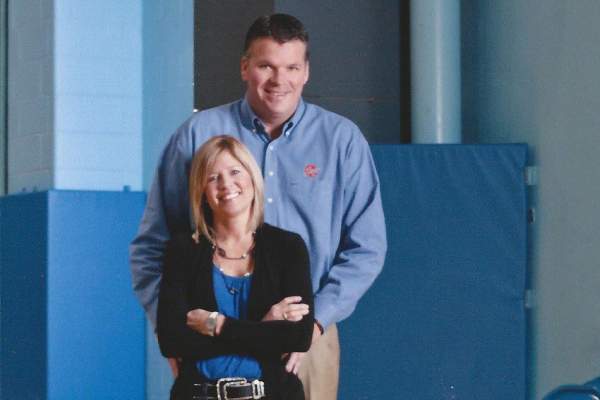 If you follow college-level basketball news, you must recognize Greg McDermott. He is an American college basketball coach who has been serving the Creighton Bluejays men’s basketball team since 2010. Previously, he was the head coach at Wayne State College, North Dakota State, Northern Iowa, and Iowa State University.

Besides a successful career, the 57-year-old enjoys a blissful life with his partner and children. However, many fans might be curious to know more about his missus. Hence, we will learn more about Greg McDermott’s wife, Theresa McDermott, in this article.

As mentioned above, the basketball coach enjoys a happily married life with his partner, Theresa McDermott. Regrettably, not much has been revealed about Theresa before she became Mrs. McDermott. She appears to be a private person who stays out of the public eye as much as possible. Anyway, the husband-wife duo first met in college, when Greg was playing for the Northern Iowa Panthers at the University of Northern Iowa.

Furthermore, the pair were engaged by their senior year and have been going strong ever since. Unfortunately, Greg and Theresa have not revealed the year they tied the knot. Nonetheless, the beautiful couple must have held their wedding ceremony in the summer season as they celebrate their anniversary in July every year.

Hopefully, we will learn more about Greg McDermott’s wife, including her family and career, in the future. Nonetheless, the couple has been together for over three decades and has not shown any signs of breaking up. The husband-wife duo must love and care for each other dearly.

Is A Loving Mother Of Three

After getting married, the McDermott couple welcomed three children into their family. They share two sons, Nick McDermott and Douglas Richard McDermott, aka Doug McDermott, and a daughter, Sydney McDermott. Greg McDermott’s eldest son, Nick, was born in October 1989. He is now a scratch golfer and works as a caddie on PGA Tour.

On the other hand, Doug was born on January 3, 1992, in Grand Forks, North Dakota. He is currently 30 years old and is a well-known professional basketball player who plays for the San Antonio Spurs of the NBA. Lastly, Theresa and Greg McDermott’s youngest and only daughter, Sydney, arrived in August of 2000. Sydney, who will turn 22 in 2022, played basketball and volleyball at her alma mater, Skutt Catholic High School.

As the title suggests, Theresa is a cancer survivor. She was diagnosed with breast cancer when she was 39 years old. Thankfully, it was detected earlier, and the chances of beating it were much higher. After undergoing treatment and medication for five years, the beautiful lady beat the disease in 2005 and is now cancer-free.

The McDermott couple now raises awareness of the early detection of cancer. The husband-wife duo visited breast cancer patients at Methodist Hospital and offered hope to them in 2013. Moreover, a pink-out game is held every year at Creighton University. All the players, staff, and audiences wear pink clothes to honor their loved ones who have battled cancer or are currently battling the disease.

In addition, the game raises funds for numerous organizations which help cancer patients. For instance, it has raised over $331,000 for various charities, including the American Cancer Society Hope Lodge, since 2011. All in all, Greg McDermott’s wife is free from cancer and is leading a happy and healthy life with him and their children. We wish the McDermott family live a life full of happiness and prosperity in the future.