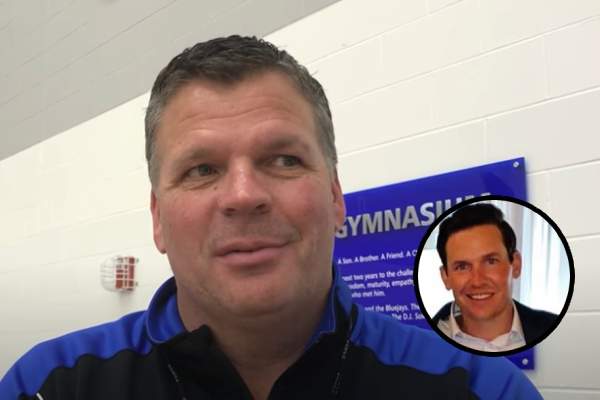 Greg McDermott is an American college-level basketball coach who has been serving as head coach of the Creighton Bluejays men’s basketball team since 2010. Formerly, he has worked at numerous other colleges, including Wayne State College and North Dakota State.

Aside from a successful career as a coach, the 57-year-old enjoys a blissful life with his family. He shares three children with his beloved wife, Theresa McDermott. However, many might be curious to know how his little ones are doing at present. So, let’s get to learn more about Greg McDermott’s son, Nick McDermott.

Nick McDermott was born to the head coach and his wife, Theresa McDermott, on October 22, 1989. He is currently 32 years old, and as the title suggests, he is the eldest among three siblings in the McDermott household. He grew up with his two younger siblings, Doug McDermott and Sydney McDermott.

Nick’s brother, Doug, was welcomed into the world on January 3, 1992, and is more than two years younger than him. 30-year-old Doug is now a renowned professional basketball player who competes for the San Antonio Spurs of the National Basketball Association.

Likewise, Nick has an age difference of about 11 years from his little sister, Sydney, born in August of 2000. Sydney used to play basketball and volleyball at Skutt Catholic High School. She is now a college student studying at the University of Kansas in Lawrence, Kansas. Greg McDermott‘s eldest child often posts pictures of his younger siblings on his social media handles, showing his close bond with them to the public.

Is A Scratch Golfer

After completing his high school studies, Nick enrolled at the University of Northern Iowa in 2008. He graduated from the college in 2012 with a Bachelor’s degree. As per his LinkedIn profile, Greg McDermott’s son worked as a sales and marketing manager at The Legacy Agency for over two years, from 2014 to 2017.

Shortly after, the handsome guy left his job and began working at Parsons Xtreme Golf or PXG. He first worked as a club fitting specialist for almost two years before being promoted to a master fitter in 2018. He held his position until June 2019. Now, the 32-year-old is self-employed as a scratch golfer and also works as a caddie on PGA Tour.

Is Greg McDermott’s Son Dating Anyone?

It is hard to say if Nick is currently dating someone or not, as he has not been public about his love life. In addition, he has not mentioned anything about having a partner on any of his social media accounts. However, he has posted a few pictures with a woman named Anna Bartolomei a few times on his Instagram handle.

The caddie once wished the gorgeous lady on her birthday. Furthermore, he added that he was glad the two of them got to spend the special occasion in Vegas. Unfortunately, Anna appears to be a private person, and not much about her is known. Could it be that she is Nick McDermott’s girlfriend?

Well, we wouldn’t be able to confirm unless one of them publicly announces that they are dating each other. Nonetheless, Greg McDermott’s son appears to be leading a happy life with his friends and family. We wish Nick McDermott all the best in his future endeavors.

Nick’s given name is of Greek origin, which means “Victory Of The People.”