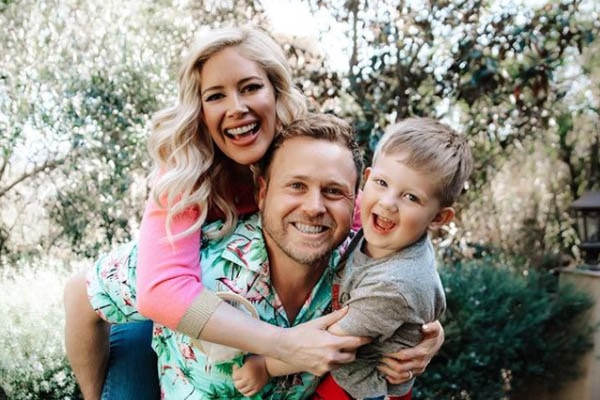 Spencer William Pratt is a well-known American television personality who came to prominence after being cast in the reality TV series The Hills. Also, he rose to fame after starting to date Heidi Montag, a primary cast member of The Hills. The beautiful pair dated for a couple of years and finally exchanged their wedding vows in April 2009. Both Pratt and Montag have appeared in numerous reality TV series together ever since they married, rising to immense fame.

The happily married couple, Spencer Pratt and Heidi Montag, are proud parents to one son named Gunner Stone Pratt, whom they call their miracle baby. Here, know more about Spencer Pratt’s son, Gunner Stone, who is already a star.

Only Child of Spencer Pratt With Heidi Montag

Gunner Stone is the only child of the celebrity couple Spencer Pratt and Heidi Montag. He joined the Pratt family ten years after his parents’ romance began on 1 October 2017. The US weekly exclusively confirmed that Spencer Pratt’s son, Gunner arrived at 3:06 p.m. weighing 6lbs 12 oz. He measured 19 inches long at the time of his birth.

Furthermore, the proud momma of Gunner Stone, Heidi, revealed that she went through five-hour-long labor, and after her son’s birth, she wanted to cry with joy. According to The Sun, Montag delivered Gunner surrounded by £20,000 ($27.5K) worth of crystals.

Soon after the birth of Gunner Stone, his parents shared their newborn’s photos on their respective Instagram. Spencer Pratt’s kid, Gunner Stone, was even featured on the US weekly magazine’s cover page some days after his birth. His overwhelmed parents declared him a miracle baby as they waited ten years to have him in their life. The magazine also featured photos of Gunner’s cute nursery and the minute-by-minute recollection of the dramatic delivery and the first day of the newborn boy at his home, along with some of his pictures.

As we mentioned earlier, Spencer Pratt’s son, Gunner Stone, is already a star. A prestigious magazine even featured him on their cover page, mentioning him as a miracle baby. Besides that, Gunner is already an Instagram star with over 79K followers at the age of three and a half.

The doting dad of Gunner, Spencer Pratt, created his Instagram account way before his birth, making sure he is completely prepared for 21st-century life. Spencer had planned a social media dynasty for Gunner when he was still in his momma’s womb. He even proudly announced Gunner as a future reality star and a social media star which he became soon after he stepped on this earth. So, he also created Gunner’s Facebook and Twitter page before his birth.

Moreover, Spencer Pratt’s little one, Gunner Stone, also has a new iPhone 8s, which his father set up before his birth. His dad, Spencer, did not want to spoil him too much. So, he gave Gunner an iPhone 8 instead of an iPhone X.

Furthermore, Spencer Pratt had a dream of his newborn debuting on a tabloid cover instead of his Instagram or Twitter. His dream came true later as his son was on the US Weekly magazine’s cover page only nine days after his arrival. Spencer Pratt’s son, Gunner Stone’s first Insta post, is also the same magazine cover.

Also, Spencer Pratt’s kid with Heidi Montag, Gunner Stone, looks like he is already a businessman. According to his Instagram page, managed by his parents, he is the owner of a jewelry store named Gunner Stone Jewelry.

A few hours after Gunner Stone’s birth, his dad, Spencer Pratt, revealed to the media that he plans his son to become a Kardashian by marrying Kylie Jenner‘s daughter. When Spencer Pratt’s son, Gunner Stone, arrived on this earth, Jenner was pregnant with her first child with Travis Scott. As expected by Pratt, Kylie gave birth to a daughter, Stormi Webster, on 1 February 2018.

Furthermore, Spencer Pratt said to The Sun that no matter what Kylie Jenner gives birth to, boy or girl, if his son loved either one, he would completely support him and give him his blessing to marry them. Now, Kylie Jenner’s daughter, Stormi, is three, and Gunner is three months older than her. So, will these two celebrity babies really be best friends when they grow up? Only time will tell.