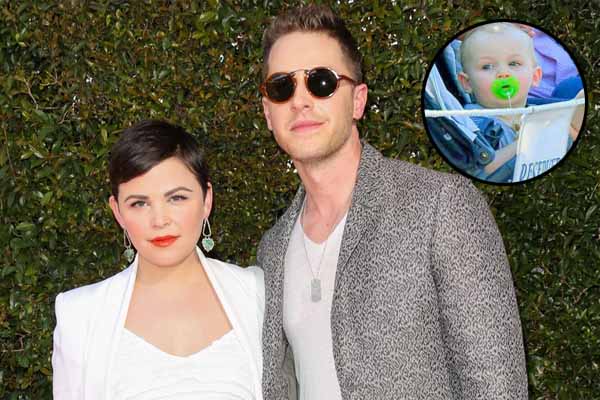 The adorable Hugo Wilson Dallas is Ginnifer Goodwin‘s son with her husband, Josh Dallas. Hugo was born on June 1, 2016. He is the second child of the couple. Hugo has an elder brother named Oliver Finlay Dallas.

Hugo’s dad, Josh Dallas is an American actor who is known for his role as Prince Charming in the TV series ‘Once Upon A Time’. Similarly, his mum, Ginnifer has also starred in the same TV series playing the character of Snow White.

Ginnifer Goodwin’s son, Hugo Is Having A Happy And Joyful Childhood

Hugo Wilson is really a lucky baby to have Ginnifer and Josh as his parents. It is because they have warm intimacy and attachment with their adorable son. They like to spend good and quality time with Hugo as well as Oliver.

So, to spend a wonderful family moment, Ginnifer and Josh celebrated  Christmas with Hugo and Oliver in 2016. Moreover, Josh Dallas and Ginnifer Goodwin took little Hugo and his brother Oliver for toy shopping. They visited Pottery Barn at The Grove shopping mall in Los Angeles to make it a memorable Christmas.

In 2017, Ginnifer Goodwin’s son, Hugo even went to Disneyland with his family. Hugo’s parents also got the chance to become a child with their children. It surely shows that Hugo is living a wonderful childhood and is having lots of enjoyment with his family.

Hugo Wilson Dallas Might Appear In The Entertainment Industry

Since Hugo’s dad, Josh as well as mum, Ginnifer are very good actor and actress, there’s a high chance of him coming in the entertainment industry. Possibly, Hugo might follow his dad’s path to settle his future careers. It could be easier for him to become an actor as his dad is a professional actor.

Or it could be that Hugo would choose a different track in the future. As it is too early to tell, Hugo could head in any direction. He might or might not follow the footsteps of his father and do something new that he likes.

Hugo is a male name that originated from Germanic origin meaning ‘mind’. Likewise, Wilson is an English and Scottish surname. Its meaning is ‘desire’ or ‘helmet’.