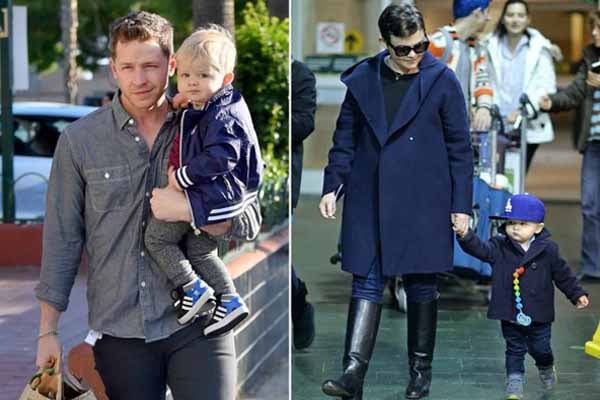 The Once Upon A Time actress, Ginnifer Goodwin‘s son, Oliver Finlay Dallas was born on May 29 of 2014 as the first child. She had her kid with her husband, Josh Dallas. He has a small brother named Hugo Wilson Dallas. Oliver is extremely lucky to have such loving parents.

Both of Oliver Finlay’s parents are famous actors and are mostly known for their roles in the Tv series ‘Once Upon A Time’. The adorable pair got married in 2014. Although Ginnifer and Josh are busy parents, they spare out their time from working schedule just to be with their children, Oliver and Hugo.

After the arrival of Ginnifer Goodwin’s adorable son, Oliver, in their family, they have been on several family outings. Ginnifer and Josh were spotted out with their son, Oliver in Canada in October 2014.

It looks as though the Dallas family goes to vacations to break free from the busy life. Looks like Oliver is really enjoying his life doing all the touring from such a small age.

Also, Oliver’s parents seem to be very possessive about their child. It is because Josh has not posted a single photo of his son on his Instagram account. Josh might not want his kid getting all the attention as Oliver is still young and childish.

Oliver Finlay‘s parents first met on the set of TV show ‘Once Upon A Time’. Then, Josh subsequently began to date his co-star, Ginnifer Goodwin in 2011. Likewise, their love for each other grew so much that they got engaged in October 2013. Maybe, during their dating and loving relationship they had planned their family already.

Thus, that may have led to Oliver’s birth after a month of their marriage. Ginnifer Goodwin’s son, Oliver got to be a big brother in 2016. Let’s hope the cute Oliver Finlay Dallas will grow up as desired by his parents.

The meaning of the name Oliver is ‘the olive tree that is an English baby name. Similarly, Finlay is a form of Scottish name, ‘Fionnlagh’ meaning ‘fair warrior’.