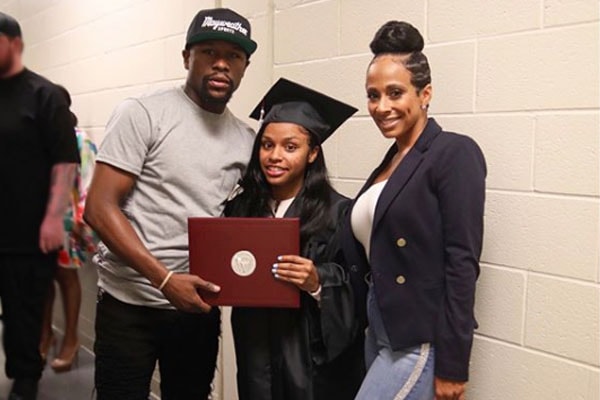 Iyanna Mayweather, Floyd Mayweather‘s daughter together with his ex-partner Melissa Brim was born on 20th of May 2000 in Nevada, Las Vegas. Iyanna’s parents Floyd and Melissa started dating each other in the late 1990s.

Iyanna is not the only child in her family. She has three half-siblings including Zion Shamaree Mayweather, Koraun Mayweather, and Jirah Mayweather from her paternal side and a half-brother named Devion Cromwell from her mother’s previous relationship.

Iyanna Mayweather Is An Emerging Star

American boxing legend Floyd Mayweather’s daughter, Iyanna is a rising star. She is quite active on various social media platforms. As of 2019, her ‘Instagram‘ account has accumulated over 948K followers. Iyanna also has a ‘Twitter‘ handle which has over 35K followers. She used to own a ‘YouTube’ channel, however, it was discontinued after posting only two videos.

At the very early age of 15, Iyanna completed her high school and then went on to receive a diploma certificate just at the age of 18. She posted the pictures of her graduation ceremony via her social media handle.

Back in October 2018, the emerging star, Iyanna released the music video of her song ‘Oh Okay Remix‘ on YouTube and also on SoundCloud.

Nevertheless, the video and her rapping style received mixed reviews by her fans and loved ones.

Iyanna’s parents, Floyd and Melissa had an on-off-again relationship. After a few years of Iyanna’s birth, her father Floyd returned back to give their relationship a second chance. Based on some speculations, Floyd thoroughly supported Melissa in raising Iyanna and even bought a house. Floyd helped Melissa in setting up her boutique shop in Las Vegas and she even named her business venture Devanna Love Boutique. The name has parts of the names of both her children.

Unfortunately, Iyanna’s parents broke up in 2012. Sources claim that Floyd was assaulting Melissa verbally and physically on two different occasions. He had allegedly hit her in front of their daughter Iyanna in one of the instances. Due to this, Floyd was even on the house arrest for almost two days.

There is without a doubt that Floyd Mayweather’s daughter Iyanna lives a very lavish lifestyle. She is known for receiving expensive birthday gifts. On the occasion of her 18th birthday, Iyanna’s father gifted her a huge 18-carat Canary Pristine ring worth around $5 million. Floyd even organized a star-studded birthday party for Iyanna. Not only that but, huge artists including Drake and Future had performed on the occasion of her 16th birthday. Iyanna had also been blessed with a Mercedes 550 S-Class and a G-Class just at the age of 14. And not many people know the fact that Justin Bieber performed at Iyanna’s 14th birthday party.

Not everyone has a fortune like Iyanna to receive expensive gifts that she has received on all her birthday events to date. Nevertheless, the teen has admitted to having a bit spoilt by her father. Plus with Floyd Mayweather’s net worth of $500+ million, he can sure afford it all.

Although there is not quite information regarding her primary career, she has registered her presence very well in the social media arena since a very early age.

Iyanna is a female given name which gives the meaning of “constantly eternally blossoming.”