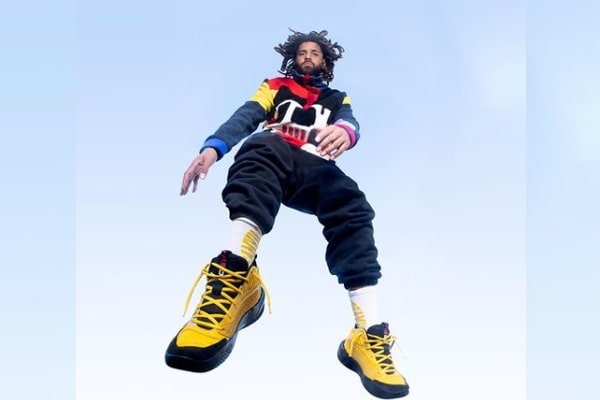 J. Cole is perceived as one of the most influential rappers of the generation. Coming from a humble beginning and a military family, Cole initially gained recognition as a rapper following his debut mixtape release, The Come Up.

J. Cole is not just enjoying a successful career and an impressive net worth of $60 million; he has been in a happy relationship since high school. As of now, Cole and Melissa Heholt also welcomed two sons together. But the notoriously secretive couple kept their relationship under wraps until director Ryan Coogler busted him of being not just married but also a father.

Therefore, here is everything about J. Cole’s children with his wife, Melissa Heholt.

J. Cole Was Prepared To Welcome His First Child

Aforementioned, Creed director Ryan Coogler busted J. Cole’s secret about being married to his wife, Melissa Heholt, and fatherhood. It turns out, J. Cole welcomed his first kid in 2016 and never bothered to share the news with his fans.

When the news about J. Cole’s marital status and fatherhood came out, his fans went on Twitter; some to congratulate while others protested against the rapper’s secrecy. Although the talk of J. Cole’s son frenzied around Twitter for a while, he still refrained from revealing his kid’s name. Furthermore, Cole’s Instagram posts are business-related only.

According to an essay titled The Audacity, published in Players Tribune, J. Cole learned about becoming a father in 2016. He further admitted that it wasn’t a surprise and he was prepared to welcome his son as he’d been taking steps to change his life for several years.

Cole also noted that the news of his baby’s arrival coincided with when he felt uninspired. Thus, J. Cole’s son must have influenced his dedication and inspired him to become a better person.

Furthermore, during an interview with DJ Angie Martinez, J. Cole talked about his fatherhood, being a husband, and musician’s life purposes. Also, Cole comes from a typical family background without media attention; therefore, wanting to raise their kids away from the spotlight is understandable.

On the other hand, what is not acceptable is the announcement of expecting a baby via song. Yes, let’s move on.

J. Cole’s wicked private ways leave people in awe. Although fans were furious about his secretive nature, they were *shooketh* to hear about J. Cole expecting another child in his final track of Dreamville album, Sacrifice.

As Cole professed his love for his wife and baby mama, Melissa Heholt, he also dropped the announcement secretly in the closing lyrics that go, ‘She gave me the gift of my son, and/plus we got one on the way.‘ The song was released in 2019. Thus, the pair must have welcomed their second child the same year.

Furthermore, in an elaborative essay titled The Audacity, Middle Child rapper J. Cole shared his delight as an accomplished musician, a doting father of two, and a loving husband. He further admitted that he’d learned the delicate art of balancing both parenthood and career.

Although J. Cole and his wife, Melissa Heholt, are yet to reveal their sons’ name or do a face-reveal, let’s remain hopeful because thanks to Ryan Coogler, Cole started opening up about his personal life a little.

J. Cole Opened Up About Fatherhood In 2019

As mentioned earlier, J. Cole is among the fewest celebrities in the music industry to have maintained such low-key life. However, that changed in 2019, and we got to have the quickest sneak peek into his life.

Also, Cole is progressing and opening up a little. In 2019, he talked about how parenthood changed his life. Reading The Audacity, we can see that J. Cole has significantly matured and that he was prepared to welcome his child with open arms. He got hitched, literally built a crib, and recorded his fourth album, 4 Your Eyez Only.

Thus, while talking to GQ about how fatherhood changed him, he promptly admitted that it felt weird as he did not experience the change people talk about always. He further added that he changed his life to start a family and have a son.

J. Cole continued that he had changed so much of his life that when he heard about being a father for the first time, he was ready to be a father and a family man. It is no secret that J. Cole has always been a dad to new artists so, fatherhood must have come naturally.

Unfortunately, J. Cole’s sons’ names are still a secret, and raising them away from the media scrutiny is their choice, and fans need to chill a little. Papa Cole might change his mind someday, or we’ll see Cole Jr. either making names in the NBA or inherit their father’s musical genes. Until then, let’s hold the horses tightly and hope Ryan busts him again. Who knows!