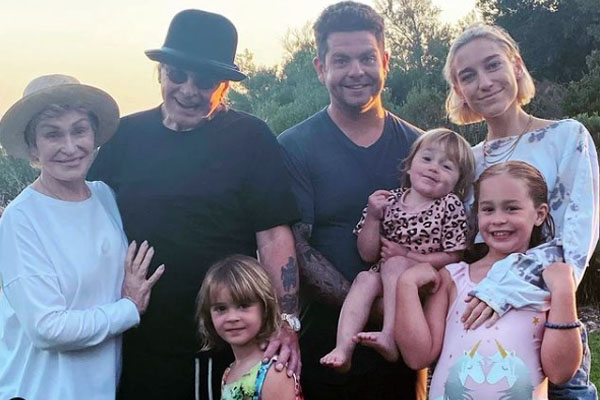 There is no doubt Jack Osbourne is one doting dad. Well, he also famous for being the youngest son of the heavy metal singer Ozzy Osbourne with his wife, Sharon Osbourne. Besides, Jack has also made his name on his own as a media personality.

But, in recent years, his fans also know him for being a dedicated father to three kids with his former wife, Lisa Stelly.

The fitness and travel reporter Jack Osbourne married Lisa Stelly on 7 October 2012, after dating for some months. However, they sadly ended their marriage six years later, in 2018, due to various marital issues. Though the now-estranged couple, Lisa and Jack, are no more together, the former couple is still on good terms to raise their three kids together.

Similarly, Jack Osbourne’s daughter, Andy Rose Osbourne, joined the Osbourne family on 13 June 2015, weighing 6lb 11oz. Reportedly, Jack’s baby mama, Lisa, had a car accident while Andy was still in her womb in May 2015. Luckily, it did not harm both Lisa and unborn Andy.

Furthermore, Lisa Stelly gave birth to Jack Osbourne’s third daughter, Minnie Theodora Osbourne, on 3 February 2018. The overwhelmed parents of three, Lisa and Jack, had announced the birth of their little girl via their respective Instagram. Along with a snap of their sleeping newborn, they shared a board listing all Minnie’s birth details. It included her weight after her birth, i.e., 7 lbs., measurement, 20 inches, and time, 5:57 am.

Jack Osbourne and the mother of his three kids, Lisa Stelly, announced their separation three months after the arrival of their last child, Minnie. However, their divorce was finalized only a year later, on 5 March 2019.

Jack Osbourne is a girl dad. However, he could have been a proud father of a son too. But, sadly, he and his then-wife, Lisa Stelly, lost their son before his birth in 2013.

In August 2013, Jack and Lisa had announced that they were expecting their second child. But a month later, on 6 September 2013, Lisa grievously revealed through her blog that she experienced a miscarriage in her second trimester. She added that she and Jack were expecting a son whom they wanted to name Theo Osbourne.

Two years after the Osbourne family’s tragic loss, Jack Osbourne’s baby mama, Lisa, paid tribute to her unborn boy on Pregnancy and Infant Loss Day. In a now-deleted post sharing a photo of her son’s tiny footprints, Lisa revealed that she would have an almost two-year-old son at that time. But, she never got to meet him, and it is all she has to remember him.

So, in tribute to his son, Theo, Jack named his third child, Minnie Theodora.

Jack Osbourne’s daughter, Minnie Theodora, tested positive for novel coronavirus in 2020, leading the whole Osbourne family to stay in isolation for some days. While revealing his daughter’s health condition, Jack told the media that his little girl contracted the virus from someone who works for him.

Only Ozzy Osbourne’s youngest granddaughter, Minnie, tested positive for the virus, while all the other members of the Osbourne family tested negative. While giving further details of the incident, Jack disclosed that his daughter got the virus after taking a sip from the drink of his infected colleague.

Later, while giving updates of Minnie, Jack said that his kid showed signs of improvement within few days. She had only mild symptoms, including a running nose and fever, for nearly three days. Despite the improvements, Jack Osbourne’s daughter, Minnie, stayed in recommended quarantine for two weeks.

Devoted grandma, Sharon Osbourne, who also tested negative for the virus, said that her granddaughter’s situation shows that the COVID-19 virus affects children against any notion of them being in a safe zone.

The doting father of three, Jack Osbourne, talked about his parenthood in an episode of PeopleTV’s Chatter in 2018. He shared about his unusual upbringing at the home of his parents, Sharon and Ozzy. Jack also talked about how his own parenting style with his three girls differs a little bit.

Jack Osbourne said that he is a little more structure with his daughters than his parents were with him and his sisters, Aimee Osbourne and Kelly Osbourne. As an example, he said that he wouldn’t take his kids out of school just to go travel. He added that he and his former partner, Lisa do a little bit, but he thinks structure is healthy.

Both Jack and Lisa are doing great in co-parenting their children. They do their best to keep their busy schedules aside and spend maximum time with their little ones. Jack often takes his most girly girls, Minnie, Andy, and Pearl, on adventures and vacations during their holidays.

Moreover, although he is not the most skilled hairstylist, he loves making his daughters’ hair and often shows his skills of creating new hairstyles on his Instagram.

Jack Osbourne’s children, Andy, Minnie, and Pearl, are growing up like normal kids. We hope they will grow up to be as successful as their grandparents and parents, in whichever career path they choose in their future.