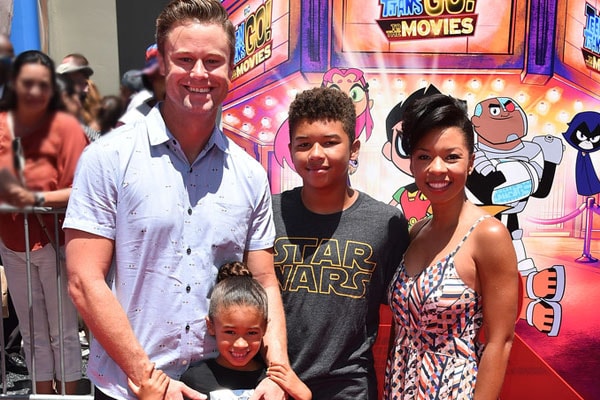 American actress, Angel Parker is a proud mother of two children. She had both of the kids together with her husband, Eric Nenninger. The lovely pair exchanged their wedding vows back in 2002, and the two are together ever since. Born on the 17th of October 1980 in Los Angeles, CA, Angel is best known for starring as Tasha Davenport on the Disney XD sitcom Lab Rats.

Angel Parker’s children include a son, James Nenninger, and a daughter named Naomi Nenninger. Now let us meet and know more about the two in detail.

James Nenninger Was Born In 2004

Eric Nenninger’s son James is the eldest sibling in his family. James was born on the 4th of June 2004. Born to the family of actors, James always had an opportunity to be in the media limelight. He is seen attending movie premieres, annual functions, and other celebrity gatherings along with his parents and siblings.

As of now, the 15-years-old James is in his high school. However, details regarding his schooling have not been revealed yet. Besides being in the media limelight, James also has his own Instagram handle with a handful number of followers. The guy also seems to promote MrBeast, a popular YouTuber, a lot. However, the handsome son of the actor has kept his Instagram account private as of November 2019.

Eric Nenninger’s Daughter Naomi Is The Youngest In Her Family

Angel Parker’s daughter Naomi was born on the 22nd of July 2012. As mentioned before, Naomi has an elder sibling brother, James, and the two lives happily together with their parents. American actor, Eric Nenninger often shares his daughter pictures on his Instagram handle. On the occasion of the national daughter’s day, Eric shared heartwarming pictures with her daughter. It seems quite obvious that the father and daughter share a really strong bond together.

Not only that but, the cute daughter also has a solid bond with his elder sibling. The adorable family of four is very mesmerizing to watch. Indeed, nothing seems to break this bond any time soon, and the family deserves lifelong happiness.

James Nenninger: James is a classic English boy’s name of Hebrew origin meaning “supplanter.” It provides the meaning of the “one who follows.”

For the latest updates on Celebrity Babies, YouTubers, and Entertainment,  follow eCelebrityMirror.