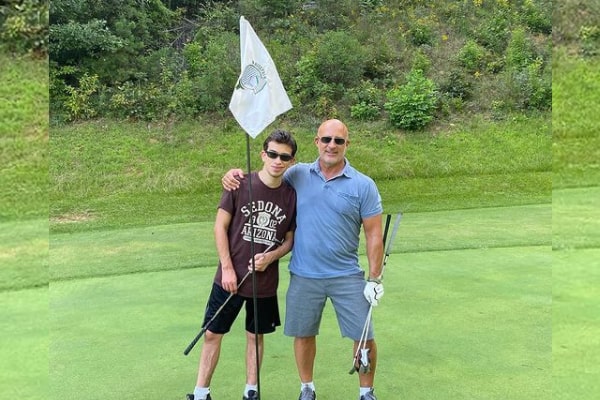 Jim Cantore, an American meteorologist known as an on-air personality for The Weather Channel, is a doting father of two kids. He embraced fatherhood with his ex-wife, Tamra Cantore, but their marriage did not last long.

Thus, here, we tried to find more about Jim Cantore and Tamra Cantore’s son, Ben Cantore, and his whereabouts.

As mentioned earlier, Jim Cantore welcomed two kids with his ex-wife, Tamra, Ben being the youngest.

Moreover, Jim Cantore’s son, Ben Cantore, was born in 1995, two years after his sister, Christina Cantore‘s birth. Unfortunately, there aren’t many details about his childhood, but he sure had all the love and support from his parents and siblings.

Furthermore, Ben is a constant face on his father, Jim Cantore’s Instagram. Moreover, he has a strong bond with Jim and is equally close to his mother regardless of their divorce.

Ben loves sports and has taken part in a couple of tennis tournaments. He also accompanies his father in red carpets and dances as per his father’s post. Although it’s a little drag to make his ski, Ben always has a blast with his papa.

Also, Ben and his sister, both are diagnosed with fragile X syndrome at a very young age.

Although Jim Cantore’s life is mostly away from social media, he spoke of his child’s condition candidly. Moreover, Ben had been slow to develop as an infant, and by age two, he still wasn’t talking.

Sadly, tests revealed that Ben was diagnosed with fragile X syndrome, the most common use of autism. The doctor’s tests discovered that Ben Cantore’s sister, Christina, carried the mutated chromosome as well.

Therefore, Jim Cantore does charitable work for FRAXA, the Fragile X Research Foundation, and the Parkinson’s Unity Walk. Likewise, he also contributed his time to Make-a-Wish Foundation events around the country and served as a celebrity with the American Red Cross.

The tragedy in the Cantore family is not limited to the kids. Ben’s mother, Tamra Cantore, was also diagnosed with Parkinson’s disease in 2005.

The only thing she dislikes about her disease is that her kids, Ben and Christiano, never saw her without it. She further added that they both have a genetic learning disorder, making it hard for them to understand her condition.

Nevertheless, Jim Cantore’s son, Ben Cantore, is a well-spirited person filled with love and enthusiasm. Unlike his sister, he stays away from social media but often appears on his father’s Instagram.

Also, Ben loves to accompany his father on hikes and spends a lot of time with him. Jim also loves his kids and feels blessed to have become a dad.

As a father, Jim is determined to give his son the best life, and as a son, Ben Cantore is adamant about living the best while maintaining confidentiality. Therefore, let’s hope to see more of Ben in the coming days.

The name Ben means son and has Hebrew origin.