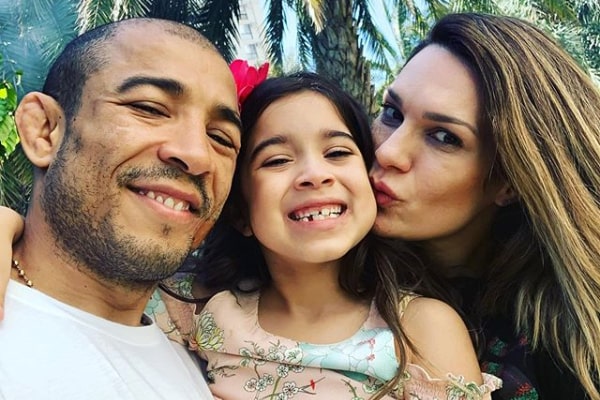 Only Child of MMA Star, Jose Aldo, And Vivianne Aldo

MMA Star, Jose Aldo, is a married man and is in love with his wife, Vivianne, insanely. Besides a professional fighter and an adoring husband, he is a doting father of his child, Joanna Aldo.

Jose Aldo’s daughter, Joanna, was born after seven years of spousal bliss in 2012. Although the birth of their daughter was silent, both Jose and Vivianne document their precious moments together.

Furthermore, the 8-year-old girl is a total sweetheart and loves to spend time with her parents. Moreover, she is much loved by her parents and goes on multiple vacations together.

Despite ample screentime, we do not know much of Jose Aldo’s daughter. She is the only child of the MMA star and Vivianne. But will she the pair welcome Aldo junior?

Aldo’s family is strikingly similar. Father Aldo is a former UFC Champion while mother Aldo has a purple belt in jiu-jitsu and has fought in Muay Thai professionally while baby Aldo loves to watch her father fight.

While speaking to MMA Fighting, Vivianne Aldo revealed that Joanna enjoys watching her father’s fight. Furthermore, the lovely little Aldo watched her father, Jose, fight with Conor McGregor and cried a lot when her father lost. She stayed up until the pair went back home and motivated her father Jose to become a champion.

Although the Aldo family consists of fighters and survivors, Jose Aldo’s daughter might not get into combat sports. Furthermore, in an interview, Jose’s wife said that she would love if Joanna wanted to become a fighter.

However, Vivianne clarified that she wouldn’t follow her father’s path. During the mother-daughter conversation, Joanna insisted that she doesn’t like fighting sports and was too girly. Meaning, Jose Aldo’s kid likes ballet and makeup. Furthermore, she plays capoeira, and that’s pretty much it.

Both Jose and Vivianne do not have a problem if she chooses a different path and has full support.

Jose Aldo’s daughter is an adorable little girl who seems to share a special bond with her parents. Vivianne and Jose’s Instagrams are full of their daughter’s smiles and their delightful activities.

Let’s hope to see Aldo’s precious girl grow up to become a successful person and hear more in the future.

The name Joanna is of Latin origin, which means ‘God is Gracious.’