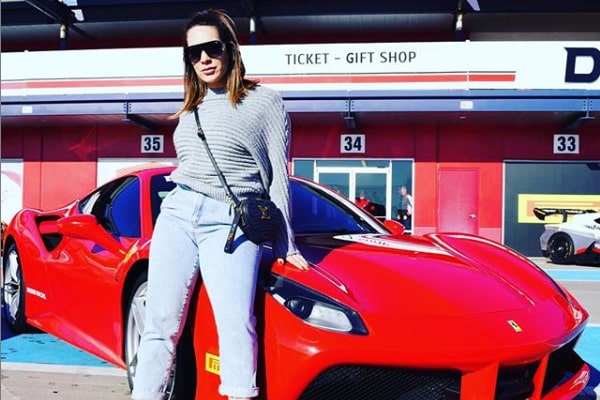 Couples with common goals walk gazillion miles together and share a unique bond. Such is the relationship between UFC Featherweight champion, José Aldo, and his partner, Vivianne Aldo.

José Aldo’s wife, Vivianne Aldo, aka Vivianne Oliveira, is a gorgeous woman who loves to identify herself as an entrepreneur, a wife, and a mother. Today, we will be talking about the wonder woman, Vivianne Aldo in this article. Giddy Up!!

Jose Aldo’s Wife Is An Entrepreneur

Jose Aldo’s wife, Vivianne Aldo, is a humble human with a knack of business ideas. Along with her partner, Vivianne got into the food business and opened a burger house called Famous Burger.

The burger place started with Vivianne Aldo’s husband, Jose’s love for handmade hamburgers, and delicious milkshake. According to Famous Burger’s site, the UFC champ roamed several countries enchanting people with his enticing fighter skills and discovered new spices, recipes, etc. However, he felt the lack of the perfect ingredient that could enthrall a ravenous soul.

Hence, Jose and Vivianne introduced the idea of creating a handmade hamburger, i.e., the Famous Burger. The burger house is doing great, and so is the fitness enthusiast, Vivianne Aldo.

Is A Great Fighter

When a couple shares a common goal and interests, they last longer than forever. Also, when there are elements to balance a relationship, it’s perfect. Such is the love story of fighter Jose and his fight lover wife, Vivianne.

Jose Aldo’s wife not only enjoys watching fights but is an excellent fighter herself. She trains with the best, i.e., her husband, and uploads several pictures & videos of them training together. Moreover, Jose revealed that Vivianne is involved in combat sports like kickboxing and jiu-jitsu. Vivianne Aldo has been training Kickboxing/Muay Thai from a very young age.

Similarly, in an interview with Es-News, the former UFC featherweight champ confidently said that it would be easy for Vivian to ‘kick Ronda Rousey‘s ass.’ Just so you don’t scratch your head reading the statement, Jose Aldo’s partner has a purple belt in jiu-jitsu and has fought in Muay Thai twice professionally.

Likewise, Aldo’s spouse, Vivianne, is present in every match, and interestingly refuses to watch him get punched. Instead, she prays for her partner’s victory. In an interview, she revealed that she peeks when the first round is over but confesses that it’s not easy. Vivianne also said that she always has a friend to inform her about the game while she tries to calm her heart.

Furthermore, Mrs. Aldo loves to spend time in the gym. Well, her beautiful curves scream the amount of dedication she puts into staying healthy.

It might be a hundredth time, but again, shared goals and interests connect a couple on a spiritual level. So is Mr. and Mrs. Aldo’s marriage since 2005. The couple has a long history and has gone through a lot together.

The former UFC champ speaks very highly of his wife and vice versa. Thus, their love is beyond explanation. But what screams passionate love is their speedy transition from lovers to spouses.

According to Jose Aldo’s wife, Vivianne Aldo’s Instagram post, the couple met more than a decade ago, and romance sparked immediately. Their passion was so fierce that they decided to share vows in less than a year. The couple got married in 2005, and the rest is history.

Aforementioned, Vivianne accompanies her husband in every match but refuses to watch him get beaten. However, she loves to give him a victory hug. Likewise, in an interview, Vivianne told that Jose’s match with Conor McGregor was devastating while she enjoyed Jose’s match with Chad Mendes.

While speaking of MMA, Jose Aldo’s better-half revealed that the couple rarely texts during the fight week. She further clarified that she keeps minimal contact because she would want Jose to eat something while he starts to cut weight on fight week.

All the love and support make Jose and Vivianne a unique and powerful couple. Well, marriage is full of surprises when one feels bored with the pungent relationships while the likes of Mr. and Mrs. Aldo seek strength and love.

Jose Aldo and Vivianne Aldo are compatible and seem to acknowledge their passion as an individual. As a result, they are still married and in love.

Similarly, the pair welcomed their first child, a daughter, in 2012 and named her Joanna Aldo. Vivianne has documented their precious moments on her Instagram.

Vivianne and Jose Aldo’s daughter is a pure soul who enjoys watching her father fight and would cry for hours when he loses. While speaking to MMA Fighting, she revealed that their daughter bawled when she watched her father lose the game against Conor. She further continued that Joanna motivated Jose to become a champion.

Well, the family of three is beyond happy and share a special bond. They go on vacation together and enjoy family time. Furthermore, in the present scenario, quarantine has helped both Jose and Vivianne make up for the times they had to be apart from their little ones.

Let’s hope we get to hear more about Jose Aldo’s wife, Vivianne Aldo, and their daughter Joanna in the coming days.