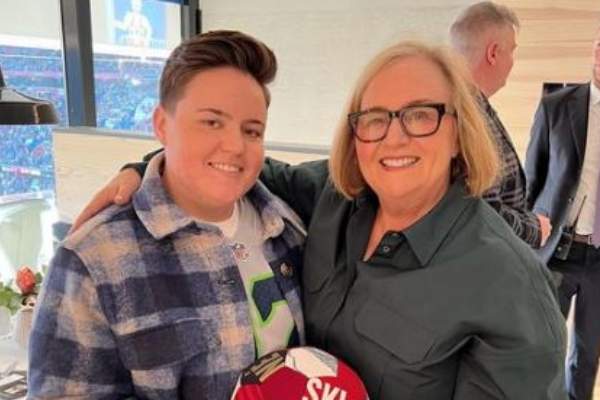 Jody Allen, born Jo Lynn Allen, is a businesswoman, philanthropist, and entrepreneur from America. She is the sister of Paul Allen, and after he passed away in October 2018, she took control of the Seattle Seahawks, the Octopus super-yacht, and the Portland Trail Blazers. She has established herself as one of the successful business personalities.

Unfortunately, Jody’s marital life with Brian Patton could not be thriving like her professional career. After being married for over two decades, the former couple separated. While they were together, the pair welcomed three kids, who have already grown up. So, in today’s article, let’s learn about Jody Allen’s children. See what they are doing these days.

The businesswoman tied the knot with Brian Patton in 1988. Her ex-husband is a native Irishman and works as a golf course manager. After exchanging their wedding vows, the couple formed a family of five by welcoming three children.

In 1989, Jody Allen’s son, Duncan Patton, was born. Then, in 1994, the couple welcomed their second child, Gardner Allen Patton. Faye Patton is the youngest in the family, and she was born in 1997.

Given that there is not much of a gap between Jody Allen’s children, their younger years must have been amazing. Likewise, the siblings’ bond remains intact to date. So, what are they involved in these days? Let’s discover this in further paragraphs.

Duncan Works In The Seattle Seahawks

Jody Allen’s son, Duncan, went to Gonzaga University. He graduated in 2012 with a degree in Bachelor of Arts in Chemistry and Mathematics. After completing college, he moved back to Seattle. Did you know Duncan summited Kilimanjaro in February 2013 with the #12thman flag? His late uncle shared his photo on his social media.

After returning to Seattle, Duncan started working as a bartender and assistant manager at The Dubliner in 2012. He worked there for two years and had responsibilities to maintain and service the general bar areas. Then, in 2014, he joined the Seattle Seahawks in the Finance Department as a Data Analyst.

In March 2019, Mr. Patton was promoted to Senior Operations Analyst, and then in August 2019, he began working as a Director of F&B Strategy and Analytics for Vulcan Sports and Entertainment. As a part of his responsibility, he provides main analytical support for the team’s hospitality and retail groups.

Talking about his relationship, Duncan has remained mum. However, he has uploaded a few pictures with a girl on his Facebook but has not captioned her name. So, could it be the lady is Duncan Patton’s girlfriend?

Nonetheless, let’s hope we learn about Duncan’s relationship status soon. Hopefully, he will have more successful days ahead.

Gardner Is An Out Going Person

Jody Allen’s baby boy, Gardner, also seems to be busy with his career. Going through his Instagram, we can see that he is an outgoing person. For instance, in June 2015, he summited Mount St. Helens. He also seems to be interested in scuba diving and photography. His Instagram features a few of his photography skills.

Talking about his educational background, Gardner received his High School Diploma from Mercer Island High School. Then, in 2013, he enrolled at the University of Washington and graduated in 2019 with a Bachelor of Arts in Environmental Studies. In June 2013, he interned at the Museum of Pop Culture for three months.

Likewise, since 2014, Mr. Patton has been working as a Service Technician at Silent World Diving Systems. In February 2018, he co-founded Vesta Ventures Limited, and he works in site scouting, on-site management, and project development. Unfortunately, not much has been divulged about Gardner Patton‘s girlfriend.

Faye Is A Photographer

Among Jody Allen’s children, her daughter, Faye, has kept information about her education and professional career away from the media. As a result, it is not known which university she went to.

But Faye has made an Instagram profile named “@diveordie,” where she shares her underwater photography. Like her elder brother, Gardner, she is also a scuba diver. Similarly, she has also shared several pictures of unique underwater species. As per her Facebook, she works at BRC Recovery.

Additionally, Faye has not talked much about her love life. In November 2018, she shared a picture of her kissing a girl. So, could that individual be Faye Patton’s partner?

All in all, Jody Allen’s kids seem to be doing well. She must be proud of what they have achieved. Hopefully, they must be living a content life. We wish them a prosperous future ahead.

Originating from French, the name Faye means “loyalty or belief.” The name Gardner derived from the Old English word gar-dyn, which means “warrior or one who bears arms.” Duncan has a Scottish origin, and its meaning is “dark-skinned warrior.”