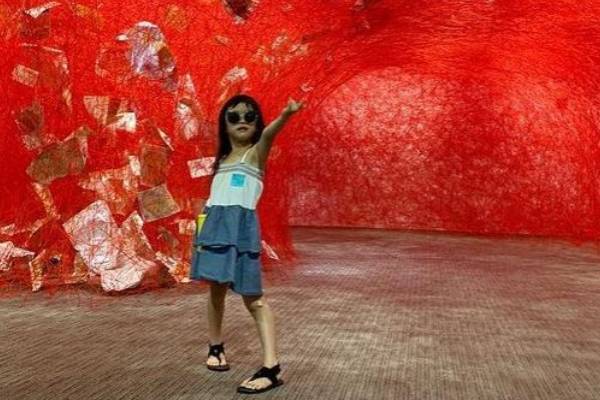 Lola Hahn is the daughter of the renowned American musician and director Joe Hahn and his wife of 8 years, Heidi Woan. With the immense fame that Joe has amassed, his baby girl, Lola, has also become a public figure.

Now, let’s learn in detail about Joe Hahn’s daughter, Lola Hahn, and how she is growing up as a well-known DJ’s kid.

Only Child of Joe Hahn With Heidi Woan

As stated earlier, Lola Hahn is the only child of Joe Hahn with his wife, Heidi Woan. Lola Hahn’s parents met in 2010 in Paris and clicked off right there. They began dating, and around two years later, they exchanged the vows on the 21st of October, 2012.

A year later, in 2013, Lola was born to her parents. Despite the fame and popularity that Lola Hahn’s dad has gained, he has not revealed much about her. Despite being a well-known family, they keep their personal lives away from the media and the spotlight.

Joe Hahn and his wife have not talked exclusively about their daughter in front of the media. However, going through their Instagram, we can see that the couple has shared several pictures of the drawing that their daughter made. Joe Hahn’s daughter, Lola Hahn, seems to be interested in drawing just like her father.

In October 2019, Lola Hahn’s mom uploaded a picture of the drawing that she made of The Avengers. This is one of the few examples of Lola’s art that her parents have shared with their followers.

Joe Hahn’s little girl seems to have inherited his artistic abilities. According to her mother, she even took fabric scrapes and designed a dress. She apparently wants to become a scientist and a fashion designer.

Only time will tell if little Lola’s dream of becoming a designer and scientist will be true. Nevertheless, we hope she finds all the success in her life.

Apart from her artistic abilities, Heidi Woan and Joe Hahn’s daughter is also pretty adventurous. Lola and her mom love asking together and have played on the snow multiple times. Moreover, the youngest one in the Hahn family is also into video games.

Her Dad Was Married Before

While she is the first child of her dad, Lola Hahn’s mom is not his first wife. Before Heidi, Joe was married to Karen Denedit. The former duo had tied the knot on the 15th of February, 2005, and according to some reports, they had begun dating in 2003. However, Lola Hahn’s dad and his ex-wife have not confirmed the information.

After being married for 4 years, the ex-pair ended their marriage and moved on in their respective lives.

Aforementioned, Lola Hahn’s papa, Joe, is a famous DJ and known for his works with the popular American rock band Linkin Park. Apart from being a DJ, he is also a musician, director, and visual artist, who had enrolled at the Art Center College of Design in Pasadena, California, to study illustration.

Furthermore, Joe had begun his DJing career while at high school. During his college days, he met Mike Shinoda and got involved with his band, Xero, which was later renamed Linkin Park. Lola’s dad has also contributed to the band by directing over 30 of its music videos.

But the music industry is not the only field that Joe has contributed to. The talented director and visual artist have worked to provide special effects work on many projects like The Seed, Frank Herbert’s Dune, The X-FIles, etc.

Lola’s dad has garnered many awards for his works, and he has also amassed immense fortune to his name. Many people love his works, and he even became the first-ever Korean-American to receive Grammy after his band won the Best Hard Rock Performance in 2002.

Moreover, Lola’s father has also earned a huge fortune which is estimated to be $25 million.

Joe Hahn’s daughter, Lola Hahn, lives a comfortable and normal life with her parents. We hope that she becomes a successful person in the future.

The name Lola has a Spanish origin, and it means “Sorrows.”