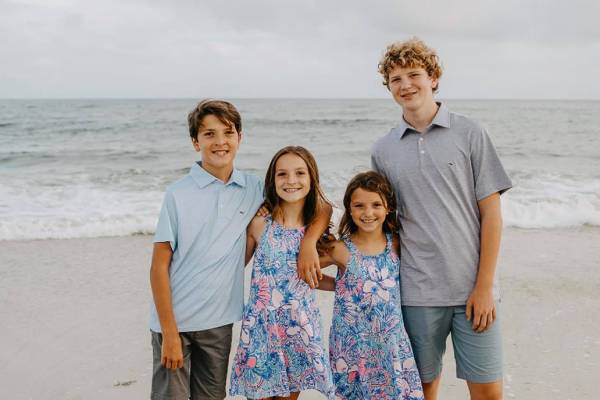 Joseph Francis Judge is a well-known football coach who led the New York Giants of the National Football League from 2020 to 2021. Before becoming a head coach, Joe Judge was an assistant coach for many years. Throughout his decades-long coaching career, he has had both admirers and critics.

The media has chastised the Giants for their surprising decision to fire head coach Joe Judge after only two seasons in recent news. After going over most of his professional career and what went wrong with his coaching style, the press turned their attention to his personal life.

The NFL coach is a family man who places a high value on bonding time with his family. Joe enjoys a blissful marital life with his high school love, Amber Meesey. In decades of togetherness, the couple has had four children: two sons and two daughters.

So, let’s take a look at Joe Judge’s children and see how they’re growing up.

As mentioned above, the former Giants’ coach lives a blissful life with his wife, Amber Meesey Judge. The two met at Mississippi State College and tied the knot on May 29, 2005, in Texas.

The eldest of Joe Judge’s kids, Sean, is currently a student at Don Bosco. He is presently in his sophomore year and plays as the linebacker in the Don Bosco Prep varsity football team. The celebrity kid also shares the videos of the team’s football matches on Hudl.

Unfortunately, the football coach and his partner have not disclosed much about their children; thus, much about them still remains a mystery. Still, Amber sometimes posts adorable pictures of the family on her Facebook page. Taking a glimpse at the pictures, it appears that the family loves going to the beach and spending time together.

So, let us wish Joe Judge’s children the best and hope that we learn more about them as time goes on.

The former Giants head coach has spent much of his life coaching teams at the collegiate and professional levels. Coaching NFL teams is no easy task, and his kids have a first-hand understanding of how football works after witnessing their father work day and night relentlessly.

Joe Judge’s children also got to witness how hectic, yet exciting, the life of a football coach is during the pandemic when Joe had to coach the team from their Massachusetts home. They are present on the practice field with their father almost every day. Moreover, Joe and Amber, a former soccer player, also introduced sports to their kids from a very young age.

Even as kids, Joe Judge’s sons enjoyed attending the games he coached and playing on the field afterward. Looking through Amber Meesey’s Facebook, it doesn’t appear that their love of sports has changed much. The only difference is that Joe’s daughters are now present to share their love of football with their siblings.

Furthermore, it appears that one of Judge’s children has already begun his athletic career. Joe’s eldest child, as previously stated, is a linebacker for the Don Bosco Prep varsity football team. However, whether or not Sean’s brother and sister will also pursue a career in sports is a mystery because of their private way of living.

Joe Judge’s kids are also not active across any social media platforms. Consequently, little information about them is available on the internet. So, while the football coach might be well known in the sports industry, it might be a while before his little ones share his fate and fame.

Regardless, let us wish the celebrity kids well and hope that their future is filled with success.

Sean is a Hebrew name that means God is gracious. Likewise, Michael, with Hebrew origins, means gift from God. Emma is a name originating from an old Germanic word that means whole or universal. Then, Riley is an Irish and Gaelic name that means courageous and rye meadow.

Ella in Spanish means she or her, although the name can also be interpreted as female or feminine. Lastly, Grace is a name of Latin origin and represents God’s grace.