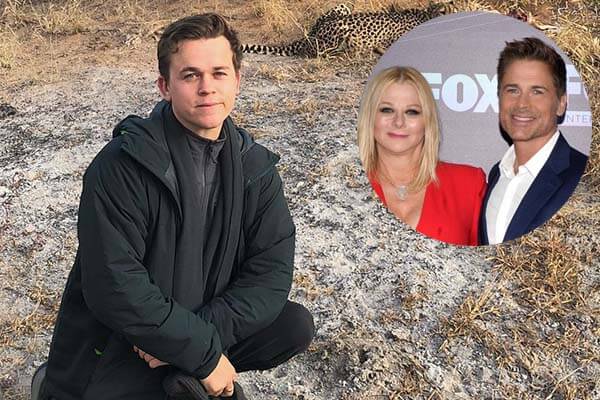 John Owen Lowe, Rob Lowe‘s son with wife Sheryl Berkoff, was born on November 6, 1995. John is the second child of Rob Lowe and Sheryl together. John’s parents tied the wedding knot in 1991 and are enjoying a fruitful marriage together.

The handsome John Owen Lowe is the youngest of Rob Lowe’s two kids. He has an older brother, Matthew Edward Lowe. Both of Rob Lowe’s sons are growing up well. John Owen is an actor and Stanford University graduate, while his brother Edward is a law school alumni.

Rob Lowe’s youngest son John Owen Lowe looks a lot like him. More than that, John Owen is following a similar career path as his dad.  And it seems he has successfully inherited his father’s charm and talent. Rob and Sheryl’s youngest son graduated with his undergraduate degree from Stanford University in 2018.

Moreover, John made his major acting debut in the TV series The Grinder (2015), starring in the role of Joel Zadak. Before that, he appeared in the short movie, A Canine Affair (2014). John Owen’s upcoming film is titled Christmas in the Wild, in which his father has the lead role.

Now, John’s twenty-fourth birthday is nearing, and he is already a well-known young celebrity in Hollywood and beyond. Besides professional acting, John is also the talent manager at Definition Entertainment, and he also works at the company WME Entertainment.

Besides being a successful actor and talent agency manager, John finds time to enjoy his life. With his hard-earned money, John is an easy-going guy besides being a loving son. And it seems like he goes out to watch baseball with his family regularly!

Likewise, John maintains a warm relationship with his brother Matthew Edward, as shown by his Instagram pictures. He undoubtedly has a friendly and cheerful personality, and he loves his family. In the future, John might surpass his dad in terms of fame and wealth.