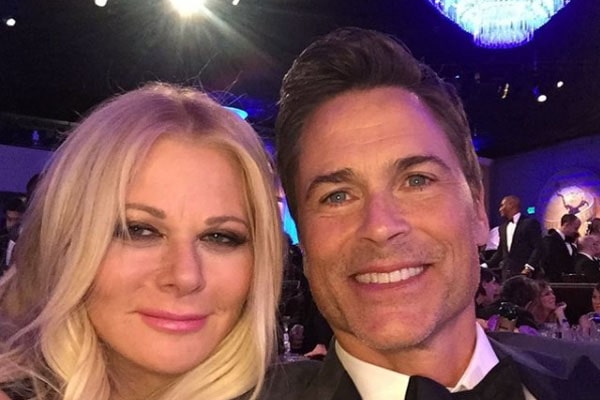 Rob Lowe is one of the leading actors of the American Entertainment Industry. The handsome hunk with a charming smile, Lowe has been in the film industry since the late 1970s and ever since has been ruling over millions of hearts with his performance. Rob Lowe is famous as a teen idol and part of the Brat Pack with roles in the 80’s movies like Class, Oxford Blues, About Last Night, and The Outsiders. The successful Hollywood star Lowe is currently busy with his latest acting project, 9-1-1: Lone Star, in the starring role.

Besides being a great producer, director, and actor, Rob Lowe is a family man with one of Hollywood’s long-lasting marriages. He is in a marital relationship with Sheryl Berkoff, who he met in the early 1980s on a blind date. Here is more about Rob Lowe’s wife, Sheryl Berkoff, including her professional and family life.

Sheryl Berkoff married Rob Lowe on 22 July 1991 in a private ceremony surrounded by their close friends and family members. The couple first met on a half-blind date in 1983. However, it may not have gone so well, and as a result, they lost contact after some days.

After almost seven years, Sheryl and her current husband, Rob Lowe’s paths crossed again on the set of the 1990 film Bad Influence. Rob was starring in the movie in the role of Alex while Sheryl was the key makeup artist. That was when the duo struck upon each other and started dating. According to Heavy, Rob fell for Berkoff’s work ethic and also admired the way Sheryl looks at life.

While there are endless divorce cases that have now become normal in Hollywood, Berkoff and Lowe chose to take a different path. According to Sheryl, when considering marriage, one should choose the person who is willing to be married than the person who just desires to get married. Berkoff thinks that Rob is not just her husband but also her best friend. Perhaps, it is one of the main reasons behind the strong marriage of Sheryl and Rob. The husband-wife duo, Berkoff and Lowe’s social media posts are the proofs that prove their strong bonding even after three decades of togetherness.

She Is Blessed With Two Talented Sons

Both of Rob Lowe’s sons with Sheryl Berkoff, are following in his footsteps in showbiz and also creating a path of theirs own. To date, they have appeared and shown their acting skill in numerous movies and TV shows, including The Lowe Files. Sheryl loves to spend her free time with her boys. The Lowe boys and Sheryl often shares pictures of traveling to various places and having fun together on their respective social networking handles. Their photos clearly depict how well Sheryl has succeeded in managing her family.

Sheryl Is A Makeup Artist

The former sister-in-law of the award-winning actress Hillary Swank, Sheryl Berkoff is a special effect make-up artist. She is famous for her works in the makeup department of numerous movies. Some of the notorious films in which Rob Lowe’s wife, Sheryl, worked include Frankie and Johnny, Glengarry Glen Ross, Eve of Destruction, and many more.

Furthermore, Sheryl Berkoff is also a fashion designer. She completed her fashion design course at the Fashion Institute of Design & Merchandising, Los Angeles. Moreover, Rob’s beloved wife, Sheryl, runs a jewelry business named Sheryl Lowe Jewelry. Over the last decade, her focus is on jewelry design, honing her art, and perfecting her process. Her most notable clients include the renowned personalities Gwyneth Paltrow, Maria Shriver, Gwen Stefani, and Oprah Winfrey. Sheryl is also an official member of the CFDA.

As mentioned earlier, the beautiful wife of actor Rob Lowe, Sheryl, is gaining a lot of success in her career as a makeup artist and a jewelry shop owner. Currently, Sheryl Berkoff’s net worth is estimated to be in millions, which she amasses from her jewelry business and as a fashion designer. It may not be as much as her husband’s fortune, which is estimated to be $100 million.

Besides enjoying a luxurious lifestyle, the multi-millionaire mother of two, Sheryl Berkoff, is also involved in philanthropic works. She donates some portion of her earnings to various organizations like The Women’s Alzheimer’s Movement and many other organizations working for women’s upliftment.

She Dated Actor Keanu Reeves In The Past

You might be surprised to know that Rob Lowe’s wife was once in a romantic relationship with Keanu Reeves. Her relationship with Reeves came to public attention after an episode on her husband’s podcast, Literally With Rob Lowe with Gwyneth Paltrow. Paltrow revealed that when she first met Sheryl, she was dating Reeves. But they separated soon after a while.

Moreover, Sheryl even had an affair with her husband’s friend and co-actor, Emilio Estevez. It is Estevez who introduced Berkoff to Lowe. Soon, Sheryl and Rob got attracted to each other and eventually married later.

Berkoff Is Older Than Her Husband

Well, there is a difference of three years between Rob Lowe and his wife, Sheryl Berkoff. The makeup artist, Sheryl, was born on 20 June 1961, while her husband, Rob, arrived on 17 March 1964.

The age difference is just a number for the romantic couple, Sheryl and Rob Lowe, as they always support each other to achieve their dreams. In fact, it has helped the lovebirds to sustain their married life so far. Rob is proud to have a wife who is secure enough to manage their family as well as help him deal with numerous scandals that occur in his life frequently.

Lowe credits his spouse, Sheryl, with helping him change his path from a hard-partying boy to a devoted husband and father. When Sheryl Berkoff met her future husband, Rob Lowe, he was struggling with alcohol addiction. But the entry of Berkoff in his life totally changed his life. Sheryl encouraged and motivated him to let go of drinking. Sheryl became the reason which kept him grounded, and recently, in 2020, Rob celebrated his thirty years of sobriety.

The actor himself admits the role of his wife played in his journey to sobriety. While talking to Haute Living, Rob said that Sheryl’s presence in his life made him examine how he was living his life, and that led him to get sober and change his life. It gave him everything he has now, a happy family, and success in his acting career.

Currently, Sheryl Berkoff lives a happy and contented life with her loving husband, Rob Lowe, and her two handsome sons.