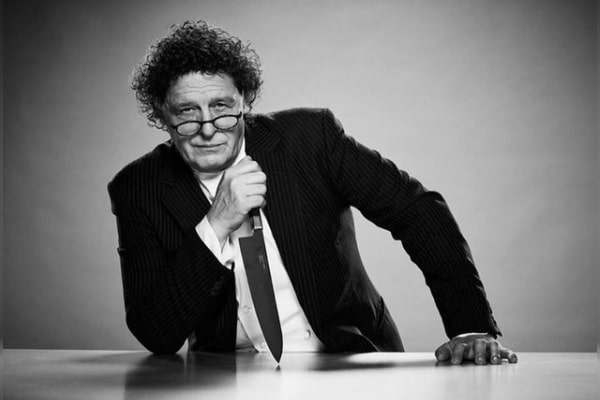 Marco Pierre White is a British chef who became the youngest to be awarded three Michelin stars at age thirty-two. The far-sighted chef not only made a name of himself but also taught some notable names in the culinary industry, including Gordon Ramsay, Mario Batali, and Curtis Stone.

Despite having a successful career as a chef, he is rather unlucky when it comes to his love life. He was previously married to Alex McArthur and Lisa Butcher, both of which lasted a few years. Lastly, he married bar manager Matilde Conejero in 2000 after eight years of dating. However, things went downhill since their marriage, and the two have already separated.

Marco and Mati Conejero Married After A Decade Of Dating

Sometimes, all one needs is love, and all one is deprived of is love itself. Maybe that’s why loving yourselves more than another is so important. Well, a similar situation is with British chef Marco White. He hit several milestones professionally, but his marital life is more than complicated.

Aforementioned, Marco married thrice, and he married his baby mama, Matilde Conejero, aka Mati Conejero, in 2000 after years of dating. The pair started their relationship in 1992 and were together for eight years before marriage.

The former couple was seen on several occasions together. They welcomed their two sons, Luciano White and Marco White Jr., before marriage. After years of courtship, they finally decided to walk down the aisle on April 7, 2000, at Belvedere restaurant in Holland Park. They also have a daughter, Mirabelle White, who was born after their marriage.

Several variables degrade Marco White and Mita Conejero’s marriage gradually. One of them was the celebrity chef’s friendship with city financier Robin Saunders. Marco Pierre White’s ex-wife suspected an affair between the two, and the pair had a massive fight, which led White to Notting Hill’s police station for fourteen hours in January 2005.

After three kids and seven years into marriage, the former couple separated, and Mita filed for divorce the same year on the grounds of unreasonable behavior. However, the proceedings were stopped after they ran up legal bills of an estimated £3 million ($4.1 million).

Since then, Marco White’s ex-wife, Mita Conejero, has been making headlines for all the wrong reasons. The former couple had open fights that might have affected their kids deeply. The most recent news of the estranged wife Mati was of her fear regarding her future.

According to Daily Mail, former Mrs. White, Mati Conejero, faced the humiliation of being evicted from the place where she lived with her daughter, Mirabelle White. Furthermore, Marco White’s former spouse talked about going through a ‘rough time’ and was ‘fearful for her future.’

Mati further added that she would not ‘talk about it’ because she did not want anyone to feel ‘sorry’ for her. Mati made the statement after receiving notice of terminating the £4,000 ($5,476) a month rental for the West London property in 2018. She alleged her ex-husband, Marco failed to renew the contract, which he eventually did.

Furthermore, Mati previously admitted to smashing the front and rear windows of Marco’s Range Rover. She also smeared graffiti in blood and scarlet nail varnish on his house in West London. Mati suffered great emotional distress during the marriage and after the separation. According to her, she recalled being persuaded to drop the divorce idea to save some cash. Conejero further reminisces all the manipulation that led her to appeal for alimony money to the high court after a long separation.

Aforementioned, the bad blood between Marco and his former wife began in 2005 when Mati accused him of cheating. Marco White’s estranged wife showed up in a High Court after a decade of separation over money. She demanded a High Court judge to consider jailing her husband after failing to pay alimony as agreed.

However, Mati’s former beau claimed that he cannot afford the payments and insisted on reviewing the agreement. The former Mrs. White accused her husband of hiding his assets since 2013. Marco White petitioned for divorce as Mati claimed for money. The former pair were expected to come to a financial conclusion until further hearings in 2020 as Marco’s representative, Justice Hole, provided details of White’s finances.

Moreover, Mati White’s representative, Barrister Philip Perrins, revealed that she was bankrupt, unemployed, and desperate. Once a successful bartender at Marco’s restaurant, Mati depended on her husband financially. Perrins further noted Marco White’s ‘high income’ and emphasized his client’s situation and the importance of alimony.

As of 2020, Marco White’s net worth is $40 million. Come to think of Mati’s unemployment, she detailed her marriage as ’emotionally abusive. Marco further wanted her to remain a decorated housewife and raise their three kids. Despite initiating divorce in 2007, the couple remains legally married and are yet to finalize their divorce. She also revealed being stuck in a dead marriage for over a decade, and Marco still refuses to let go.

In rare interviews, Marco White’s estranged wife revealed her frustration and admitted that she’d lost her strength and needed to find a solution. Marco and Mati’s separation is possibly one of the most prolonged and hurtful divorces in British history.

As stated earlier, Marco and Mati Conejero dated several years before exchanging vows. They had welcomed two sons, Luciano White and Marco White Jr., before marriage and the youngest daughter, Mirabelle White, after a few years into conjugal.

Although Mati Conejero’s marriage started deteriorating in 2005, she forever made efforts to keep her children safe and away from nonsense. However, her kids were massively hampered by their parents’ separation and public brawl.

As of now, Mato Conejero’s children with Marco have grown up into fine humans. Luciano, their oldest child, stepped into the restaurant industry like his father and started his venture called Luccio’s. Similarly, Marco White’s daughter, Mirabelle White, is looking forward to her future as a ballerina. Despite a painful separation and ’emotionally abusive’ divorce battle, Marco White’s ex-wife tried to keep a positive environment for her children.

Unfortunately, Mati Conejero worries about her younger son, Marco Jr., who has tattoos all over his body. He is a television personality who rose to fame after an adulterated episode and arrests in charge of theft. He is all over the media portal for the wrong reasons, and Mati worries about his future. She further revealed that she cries to sleep as she watches her young son deteriorate his life.

British chef Marco White’s former bride, Mati Conejero, has had multiple run-ins with the law. Besides fighting for alimony and divorces, she was also arrested on charges of assault against her sons.

Mati was charged with attacking her sons, Luciano and Marco Jr, at her £500,000 ($684K) London home in 2015. Police were called to an apparent altercation at Chiswick High Road on 20 September 2015. Furthermore, Marco White’s ex-partner was arrested on suspicion of actual bodily harm after attending a West London police station in October.

Mati was bailed pending further inquiries. However, both her sons and former partner failed to appear at the hearing, and Mati vehemently denied any improper action.

Marco White’s ex-wife, Mati Conejero, had to go through several rough phases and has ended up with nothing but debts. Besides making a living off of her alimony, she might be resurrecting her career slowly. Let’s hope things go well for Mati Conejero in the coming days.