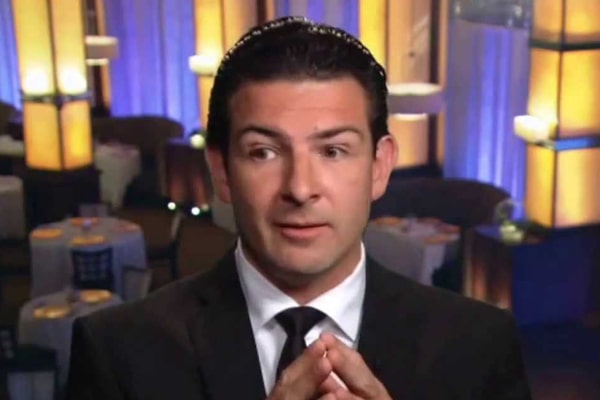 As famous as Gordon Ramsay‘s sarcasm is, his show, Hell’s Kitchen, has great potential to uplift a business. Well, here we shall be tailing Jean-Philippe Susilovic, who rose to fame from Hell’s Kitchen. The Belgian tv personality, Susilovic is a restaurant director and appeared as the maître d’hôtel on the American version of the reality show, Hell’s Kitchen.

Charming people with his appearances and heated arguments with the world’s top chef, Gordon, Jean-Philippe Susilovic, amassed a considerable number of fans who are curious about his whereabouts. Therefore, here are a few facts about Hell’s Kitchen’s Susilovic.

Aforementioned, Jean-Philippe Susilovic rose to fame as the maitre d’hotel for chef Gordon Ramsay’s cooking show, Hell’s Kitchen. According to Susilovic’s IMDb, he is credited for a hundred plus episodes of the show from 2005 to 2014.

Furthermore, Jean-Philippe’s unique attitude made him people’s favorite. Most people cannot take the heat of the show. However, Jean-Philippe managed somehow. During an interview with CarterMatt, he revealed that he felt sorry for genuinely talented chefs who have mental breakdowns in the middle of the show.

The Belgian-born restaurateur, Jean Philippe Susilovic, even compared his experiences with Formula One races with many crashes. Having experienced, he was able to turn the tables and maintain the calm of the guests during the show. Although HK is full of surprises and the contestants are genuinely surprised by the reactions, Jean-Philippe came back for more until season 13.

Besides Hell’s Kitchen, Jean-Philippe has a good relationship with the savage chef and has worked together for several decades.

As mentioned earlier, Hell’s Kitchen’s Jean Philippe Susilovic has worked with Gordon Ramsay both on and off the screen. He met Ramsay in Cannes, France, while he was doing an apprenticeship in La Palme D’or. Moreover, they had some friends in common and were aware of Gordon’s quest for ideas to open his first restaurant, Aubergine.

Well, before Hell’s Kitchen, Jean ran Petrus as a restaurant director. He had missed three seasons of the show because Petrus had relaunched in different locations. Fans were agitated when their favorite person went missing. However, in 2010, Ramsay shared a tweet claiming Jean-Philippe went back to his job and responsibility as restaurant director.

for everyone asking about why Jean-Philippe’s not in Hell’s Kitchen, he’s back working as Restaurant Manager at Petrus in London…

Furthermore, Jean-Philippe left the company in 2011 and started his own venture in Belgium. He returned to the show after the Fox and Gordon approached.

As stated before, Hell’s Kitchen’s Jean-Philippe won several hearts through the show. However, he was always surrounded by food and serving people as his parents owned a restaurant for over four decades. When asked about how he started in the restaurant industry, he recalled pampering guests at age 7.

By the age of 20, Jean-Philippe Susilovic had graduated with a specialization in wine and started working for Gordon in the Aubergine in London. Furthermore, he started his own restaurant named Bentley’s, ranked in the Michelin Guide Belgium 200 list.

Like Tripadvisor, sites gave Philippe Susilovic’s restaurant a food rating and a review from MICHELIN, which describes the restaurant as trendy and ‘epitome of smart and elegant.’

Sadly, there are no sites and dead links that lead to Bently’s. Furthermore, Jean-Philippe has served several stars, including Whoopi Golberg, Diana Ross, Sharon Stone, throughout his career. He further preferred to stay at Ostend and serve Ostend guests.

Besides back-to-back success, Philippe also had a major accident in 2005.

To err is humane. Therefore, people make silly mistakes and have accidents. Jean-Philippe Susilovic also suffered a significant injury when he fell three stories from his flat in Stockwell. He was taken to King’s College Hospital with a suspected broken back.

The Belgian matre d’ fell 40 feet from his Chelsea apartment block in an attempt to access his apartment. According to The Scotsman, Susilovic’s neighbors called the accident ‘hideous.’ Thankfully, Jean-Philippe regained his strength swiftly and began serving people.

The hard work and dedication throughout the decades aided Jean-Philippe Susilovic’s net worth massively. Although there aren’t details about his income, he earned a decent amount as Gordon Ramsay’s restaurant director. He later started his restaurant, which only adds more fortune to his account. Moreover, Susilovic’s appearance in Hell’s Kitchen was very favorable to his account as well. Thus, he leads a decent life with his partner and kids, following his passion for serving food and pampering guests.

Met His Lover In Belgium

There will always be that divine force that will shift one’s energy completely. For Jean Philippe Susilovic, it was love. During an interview, he revealed that he found his life, Vicky Heine, in Belgium. Hence, he started a restaurant named Bentley’s in Belgium. The couple has beautiful chemistry and managed their family business swiftly.

Moreover, Jean-Philippe Susilovic’s wife, Vicky Heine, appeared in a few interviews alongside Jean. However, Susilovic prefers to keep his life confidential. Therefore, we do not have much about the couple’s romance and their marriage detail. However, they could be enjoying a blissful marital life and possibly great parenthood secretly.