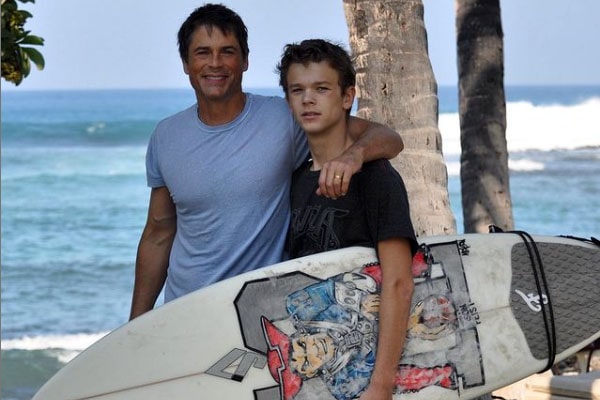 Rob Lowe, born Robert Hepler Lowe, is a familiar face in the American entertainment industry. Lowe has won millions of hearts with his works in numerous movies as an actor, producer, and director. One of the famous Hollywood stars, Rob Lowe, is known for his roles in blockbuster films, including The Outsiders, Oxford Blues, Square Dance, and the NBC political drama The West Wing. The award-winning actor Lowe is the brother of another celebrated actor, Chad Lowe.

Lowe is in a marital relationship with the makeup artist Sheryl Berkoff for more than two decades now. The pair met on a blind date in 1983 and has been together since. With Berkoff, he has two sons, Matthew Edward Lowe and John Owen Lowe. Today we will be discussing five interesting facts about one of Rob Lowe’s sons, Matthew Edward Lowe, including his love life and his career achievements.

Matthew Lowe Is The Eldest Son Of Rob Lowe

Among the two sons of actor Rob Lowe, Matthew Edward Lowe is the eldest. Rob and his long-time wife Sheryl Berkoff welcomed their first child, Matthew Lowe, two years after their marriage in 1993. He became a proud elder sibling after the birth of his brother, John Lowe, in 1995. Along with his own father, Matthew’s uncle, Chad Lowe, is also a well-known actor. He also shares a close bond with Chad’s daughters/his cousins, Fiona Hepler Lowe, Mabel Painter Lowe, and Nixie Barbara Lowe.

Growing up in a family of celebrities, Matthew Lowe had a great childhood. He attended Duke University from 2012 to 2016, where he earned a Bachelor of Arts in History. During his time at Duke University, Rob Lowe’s son, Matthew, was a member of its Alpha Delta Phi Fraternity. Later, he attended Loyola Law School in Los Angeles and gained his law degree in 2019. At Loyola, Matthew was a part of the Section Representative for the Entertainment and Sports Law Society.

Matthew Is Also A Part Of The Film Industry

Rob Lowe’s son, Matthew Edward Lowe, has inherited not only his dad’s striking looks but also some acting skills. To date, he has worked in numerous TV series and talk shows. In 2017, Matthew appeared alongside his dad and his younger brother in the A&E show, The Lowe Files, in which the Lowe boys traveled around the country to explore unsolved mysteries. On IMDb, Rob Lowe’s eldest son is credited as Edward Matthew Lowe.

Furthermore, Rob Lowe’s son, Matthew, has also accompanied his father on various talk shows, including The Insider, Ellen DeGeneres Show, and Entertainment Tonight. He might have appeared in other unreleased short films as well, but details about it are not available for the public for now.

Nevertheless, Matthew Lowe loves to introduce himself as an actor. According to his Instagram and Twitter, he is also an avid photographer. He enjoys capturing almost every special moment of his life on camera and sharing them via social media handles. Looking at all of the beautiful photos, we can see that Lowe possesses talent both in front of and behind the camera.

Aforementioned, Rob Lowe’s son, Matthew Lowe, earned his Juris Doctor from the Loyola Law School. Moreover, according to his Instagram page, he is a certified attorney now. To sharpen his knowledge in the legal business, he even worked as a Summer Law Clerk in the Russ, August & Kabat located in Greater Los Angeles Area for some months.

Besides appearing in television shows with his father, Matthew Lowe currently serves as the Head of US Talent at Komi. Before this, he was a Business Affairs Intern at William Morris Endeavor (WME). Moreover, he also interned at various other organizations including, Irell & Manella LLP, Constellis, and Colony Capital Inc, before securing his job at Komi.

He Is An Ocean Addict

Well, Rob Lowe’s son, Matthew Lowe, is a serious outdoor enthusiast, especially an ocean addict. Either it’s exploring the coast of Santa Barbara or catching a giant fish while on a fishing trip, he loves spending his spare time exploring oceans. In fact, his Instagram page is filled with photos of him fishing. Also, he enjoys boogie-boarding, body-surfing, and scuba diving with his friends and family members.

The handsome attorney, Matthew Lowe, is also an avid pet lover. He often posts pictures of his pet dogs on his social media handles. Moreover, Matthew loves to hang out with his dad, Rob, and brother, John. The trio often shares pictures of traveling to various destinations and having fun together.

The charming lad, Matthew Edward Lowe, is not single at the moment. He is in a romantic relationship with Tara Coleman. Matthew Lowe’s girlfriend, Tara, is a model currently engaged in the Los Angeles-based talent agency, Saint Agency. She is also an Instagram star with over 2k followers as of January 2021.

Before his relationship with Coleman, Rob Lowe’s son, Matthew, dated his college friend, Christina Tribull. Matthew Edward Lowe’s ex-girlfriend, Christina, is also a graduate of Duke University. Currently, she is part of the global marketing team for Polo Ralph Lauren.

Matthew’s celebrity dad, Rob Lowe, leaves no stone unturned to make his wife, Sheryl Berkoff to feel special. Recently, Rob surprised his love, Sheryll, on her birthday, by signing up for a surprise session on her favorite TV show, ‘Celebrity Family Feud.’ It was Sheryll’s whole dream to be on the show. So, the eldest Lowe made it happen. We hope Matthew is also doing his best to gratify his girl, Tara, like his dad does for his mom.

For now, Matthew Lowe is enjoying his life to his best, traveling various places, having fun with his family members, and pursuing his career as an actor, photographer, and attorney. Maybe in the future, we will see more of him on the silver screen.