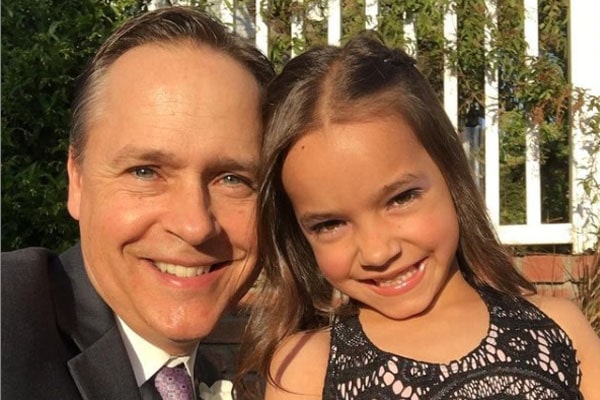 Chad Lowe is one of the most loved actors and directors of the American film industry. He has directed more than a dozen movies and acted in numerous television series and films to date. Among those numerous movies and TV series, Lowe is mainly recognized for his performance in the ABC show Life Goes On as a young man living with HIV, which earned him an Emmy Award in 1993. Besides, Chad Lowe is also the younger brother of another popular tv-actor and producer, Robert Hepler Lowe, aka Rob Lowe.

The Pretty Little Liars actor has been married twice in his lifetime. Lowe was in a marital relationship with actress Hilary Swank from 1997 to 2007 and went on to marry Kim Painter in 2010. He did not have any kids with his ex-wife. However, with his current wife, Kim, he is a father of three beautiful and talented daughters. Here, in this article, we will talk about one of Chad Lowe’s daughters, Fiona Hepler Lowe.

Fiona Hepler Lowe is the second child of the award-winning actor Chad Lowe with his beloved wife, Kim Painter. Kim gave birth to their baby girl, Fiona, on 15 November 2010 in Los Angeles. The overwhelmed father, Chad, announced the birth of his little girl through a post on his Twitter page. He even posted another tweet some days later thanking everyone for their kind words of congratulations on his daughter’s birth.

It’s a girl!!! And she’s as beautiful as her mommy (@ikimlowe) & big sister Mabel!! We are blessed!

While talking to the People magazine some days before Fiona’s birth, Chad said that he and his entire family were busy gearing up for the new baby’s arrival. He had also revealed that his wife was due that week, and their little bundle of joy joined the family right on time. Fiona got her middle name in tribute to her late grandmother, Barbara Lynn Hepler. It is also the middle name of her uncle, Rob Lowe.

Chad Lowe’s daughter, Fiona Hepler Lowe, is growing up well. According to an Instagram post from her father, she started her first grade in August 2019. So, Fiona might be in her second grade at the moment.

Chad Lowe is a girl dad. Besides Fiona, he has two more daughters, one older and the other younger than her. Fiona Lowe’s elder sister, Mabel Painter Lowe, arrived on 16 May 2009, a year before her parent’s marriage. Similarly, her small sister and the youngest member of the Lowe family, Nixie Barbara Lowe, made her a proud elder sister on 18 March 2016.

Chad Lowe’s kid, Fiona, shares a great bond with both of her sisters. She loves to take care of and help her little sister whenever needed. The Lowe sisters enjoy doing various kids activities like playing learning games, trying science experiments at home, and many more. They even love to work together in the garden with their parents and spend quality time with each other.

Fiona Hepler Lowe, the middle daughter of Chad Lowe with Kim Painter, is an adventurous kid. She enjoys going on trips with her sisters and parents during her vacations. The Lowe family often goes on hikes in the nearest mountains, visit different places surrounded by natural beauty, and the nearest beachside during summer.

Chad Lowe’s daughter, Fiona, is brave enough to go for rock-climbing, ice-skating, and ice-surfing with her family. At the very beginning of the spring of 2020, Fiona’s dad took her and her elder sister, Mabel, for rock climbing. In the video shared by Chad, Fiona was seen climbing between the rocks like a pro-rock climber.

Besides going on adventures, Chad Lowe’s little girl, Fiona Lowe, has a great passion for singing. She often takes part in singing competitions organized at her school and other similar programs. Fiona has an interest in dancing as well. Sometimes, Fiona and her sisters even enjoy working with their mom in the kitchen, visiting their dad at his workplace, and also trim their father’s hair. All of this shows the close bond Fiona shares with her family. We love seeing her happy and enjoying her life to the fullest.

The girl name Fiona is an Anglicisation of the Irish name Fíona which means white or fair.