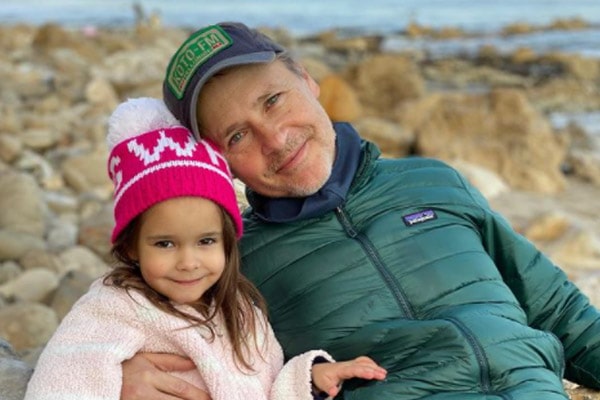 Chad Lowe is a well-recognized face in the American movie industry. The brother of other famous entertainment personality Rob Lowe aka Robert Hepler Lowe, Chad is popular for contributing to numerous acclaimed movies as an actor and director. He is mainly famous among people for portraying the supporting role of a young man with HIV in the TV series Life Goes On.

Here, please get familiar with one of Chad Lowe’s daughters, Nixie Barbara Lowe, along with her everyday life.

Adorable beauty Nixie Barbara Lowe is the youngest daughter of the celebrity actor Chad Lowe with his beloved spouse Kim Painter. The good-looking couple, Chad and Kim, welcomed their little girl, Nixie Barbara, on 18 March 2016. While she arrived a little earlier than the due date, Nixie and her momma, Kim, were healthy and strong at the time of her birth.

The overwhelmed father, Chad, announced the youngest member of his family’s arrival through a post on his Twitter page. He also expressed his happiness for being officially outnumbered and revealed Nixie’s full name via the same post. Some weeks later, the jolly parents of Nixie even had her photo shoot for the memories. Nixie’s mom, Kim, also shared some of the best photos from the shoot.

Furthermore, Chad Lowe’s kid, Nixie Barbara Lowe, has two elder sisters. Her eldest sister, Mabel, was born before her parent’s wedding on 16 May 2009. Similarly, Nixie’s other sister, Fiona, joined the Lowe family on 15 November 2012. All three of Chad Lowe’s daughters with Kim Painter share a great bonding. Being the youngest child of the family, Nixie is getting extra care and love from her parents and her big sisters.

Aforementioned, Nixie Barbara Lowe has two big sisters. Going through her parents’ social media pages, it seems like Nixie is enjoying her childhood to her best. She loves spending time with her sisters playing, doing various activities, and visiting different places.

Chad Lowe’s little girl, Nixie Barbara, often travels to various destinations with her sisters and parents. She loves going to the beach, sunbathing, and play by the beachside with her sisters. As Chad Lowe often mentions on his social networking handles, the Lowe family is never bored when the little one is around. Like most kids, she is carefree and always runs and plays around the house with her sisters making the whole family happy and loving her more.

Furthermore, Nixie loves to dance to rock music. Seeing her dancing videos on her dad, Chad’s Instagram, it looks like she is already a good dancer. Also, little Nixie and her sisters sometimes try to cut their dad’s hair. Looking through the Lowe girls’ adventures, we can say that Nixie Barbara’s life is full of fun and mischief.

Nixie Barbara Lowe Is An Outdoorsy

Chad Lowe’s daughter, Nixie Barbara Lowe, is an outdoor enthusiast. She enjoys traveling to various places with her family. It seems like she has already visited most of the tourist destinations around her place at such a young age. She even visits out of her country during holidays. Moreover, Nixie is also a nature lover. She is a great help while her parents are gardening. Moreover, she often goes on-farm visits and loves clicking photos with the farm animals.

Besides, Chad Lowe’s youngest daughter, Nixie, also seems to have an interest in cooking. She likes to help her mother in the kitchen and even can make cookies by herself. Nevertheless, little Nixie Barbara seems to be an active kid. Her parents must be proud of her and love her to death.

The girl name Nixie is of Old German origin which means water sprite.