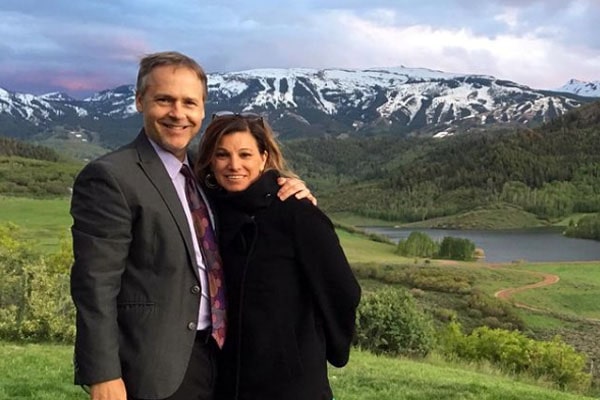 Chad Lowe and Kim Painter are in a marital bond since 2010. Image Source: Chad Lowe's Instagram.

Chad Lowe is well-known for his contribution to the American film industry as an actor and director. The younger brother of another famous figure, Rob Lowe, Chad won an Emmy Award for portraying the role of a young man living with HIV in the 1990’s show Life Goes On. Some of the other films acted and directed by Chad Lowe includes ER, Now and Again, and Pretty Little Liars.

Apart from being a successful entertainment personality, Chad Lowe is a family-oriented man with a loving wife and three kids. Previously married to actress Hilary Swank, Lowe is currently in a marital relationship with beautiful Kim Painter.

Married To Chad Lowe Since 2010

Kim Painter walked down the aisle with actor Chad Lowe on 28 August 2010 in the presence of some of their friends and family members. They exchanged their wedding vows in an oceanside ceremony at Terranea Resort in Los Angeles. Chad Lowe’s brother, Rob Lowe, served as the groom’s best man while their daughter, Mabel Painter Lowe, was their ring bearer. Kim looked gorgeous in a gown designed by world-renowned designer Kirstie Kelly while Lowe wore a Dolce & Gabbana shirt and tie under a Rag & Bone suit.

Kim Painter and Chad Lowe started dating a few months after Lowe’s divorced his former wife, Hillary Swank. On 19 January 2007, while talking to the People magazine, Chad Lowe’s publicist, Cindy Guagenti, confirmed their relationship. Moreover, Painter and Lowe were first spotted together publicly at the LA premiere of Carrie Fisher‘s one-woman show, Wishful Drinking, on 15 November 2007. They dated for almost three years and finally married in 2010.

Chad Lowe’s Family Had Issues With Kim At First

After Painter and Lowe’s marriage ceremony, Perez Hilton reported that some of Lowe’s family members had some issues with Painter. Some sources confirmed exclusively that Lowe’s family were not happy about their son’s decision to marry Kim Painter. There were rumors that Painter married Lowe for fame and money. Some well-wishers and family members of Chad even speculated that Kim planned to get pregnant right after she began dating to secure her financial future.

However, the couple has put the rumors to rest and are now enjoying their life together. All the above rumors did not affect Chad’s bonding with his current wife, Kim. Both of them chose to neglect all those negative comments and enjoy their time together. As a result, even after almost thirteen years of togetherness, there are no reports of them having any marital issues.

Mother To Three Daughters With Chad

Chad Lowe’s wife, Kim Painter, is a proud momma to three gorgeous daughters, Mabel Painter Lowe, Fiona Hepler Lowe, and Nixie Barbara Lowe. As mentioned earlier, the husband-wife duo, Kim and Chad, welcomed their first child, Mabel, a year before their wedding on 16 May 2009. She was fifteen months old when Kim and Chad walked down the aisle.

Like her husband, Kim Painter is also involved in the movie industry. In the past, she has provided her service in numerous TV Shows and films as a producer and director. The aunt of Rob Lowe’s sons, Matthew Edward Lowe and John Owen Lowe, Kim was the co-producer of Carrie Fisher’s real-life documentary Carrie Fisher: Wishful Drinking. Other films in which Chad’s spouse worked include Instant Dads, Enemy of the State, Wonderland, and many more.

Furthermore, Chad Lowe’s spouse, Kim Painter was also the personal assistant of Carrie Fisher. She assisted Carrie for some years and left her job after meeting her husband. Currently, Kim does not seem to be engaged in any professions and stays at home to take care of her kids while Chad has worked in many well-known movies and television series.

Kim Painter Is A Keen Surfer

As stated earlier, Kim Painter’s Instagram page is private at the moment, due to which her posts are visible to limited people only. Still, we can see her latest posts on her Twitter page. As mentioned in her Instagram and Twitter bio, she seems to have a keen interest in surfing. Moreover, going through her Twitter feed, it looks like she is a great fan of the San Francisco 49ers, and rarely misses their games.

Moreover, Chad Lowe’s wife, Painter, loves to travel to various destinations and attend concerts with her children and loving husband. The Lowe family of five goes to numerous tourist destinations for refreshment whenever they get free time from their daily activities.