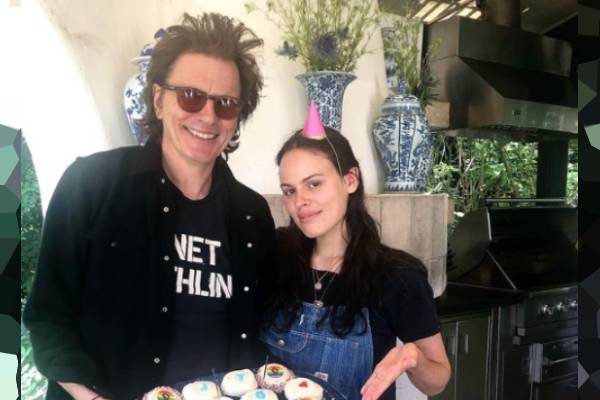 Best known as the bassist for the new romantic band Duran Duran, John Taylor is a British musician, singer, songwriter, and producer. Born Nigel John Taylor, he is one of the founding members of the band, which was extremely popular in the 1980s. He temporarily left Duran Duran in 1997 to pursue a solo music and film career.

Aside from having a successful career in the entertainment industry, the bassist enjoys a blissful life with his family. Additionally, he is a doting father and many of his fans must be curious about his children. Today, we will learn about John Taylor’s daughter, Atlanta Noo Taylor.

As per Daily Mail, the photographer became pregnant with Atlanta when she was only eighteen. She was still carrying her little girl in her belly when she exchanged vows with John. Amanda gave birth to Atlanta on March 31, 1992.

Unfortunately, Atlanta’s parents are no longer together; they divorced in May 1995, when she was only about three years old. Nevertheless, her mother and father must have absolutely adored her and showered her with lots of love.

John Taylor’s Daughter Is A CEO

Atlanta Noo Taylor is a multi-talented person. She is an entrepreneur, clothing designer, model, DJ, podcast host, and brand ambassador. She has been credited for her appearance in the movies Elvis & Nixon, Palo Alto, and The Strange Strangers as an actress.

Furthermore, the media personality is the creator and owner of a DTC apparel company named Lushious, running for over fifteen years. As per her LinkedIn account, she loves designing clothes and is quite passionate about coming up with sustainable, affordable, inclusive, beautiful, and well-constructed apparel.

In her free time, Amanda De Cadenet’s baby girl enjoys DJing. In addition, she also hosts a podcast titled I’m Over It, where she answers her fans’ questions and talks about her vintage clothing collection.

Has Two Half-Siblings And Step-Siblings

After Atlanta’s mom and dad split up, they moved on and have found new love interests. John Taylor met fashion designer Gela Nash-Taylor in 1996 and married her in 1999. Likewise, Atlanta’s mother, Amanda, married the guitarist of the rock band The Strokes, Nick Valensi, in 2006. The two met at the band’s performance in 2002 and dated for five years.

John Taylor’s daughter has two step-siblings from his side; a brother named Travis Nash and a sister named Zoe Nash. Furthermore, she has two half-siblings from her mother’s side; fraternal twins, Ella Valensi and Silvan Valensi. The 30-year-old sometimes posts pictures with her half-siblings on social media.

This shows Atlanta has a close relationship with her little siblings and enjoys spending quality time with them. Hopefully, she is close to her step-brother and step-sister as well.

The entrepreneur has been in a romantic relationship with her longtime boyfriend, David Macklovitch. Moreover, she is engaged to her lover. Furthermore, Atlanta Noo Taylor’s soon-to-be husband, who goes by the stage name Dave1, is a musician and one of the founding members of the electro-funk duo from Montreal, Chromeo.

Unfortunately, it is unknown when and how the lovebirds met. However, John Taylor’s baby girl has been betrothed to the music artist since October 2019. The couple frequently uploads pictures of one another on their Instagram handles, expressing their love and adoration for each other.

Well, it seems John Taylor’s daughter is leading quite a happy life. She is likely to get married soon too. We genuinely wish the Macklovitch-Taylor pair a blissful marital life ahead.

Atlanta is of Greek origin from the Greek Goddess Atalanta and is a female name meaning “unswaying.”