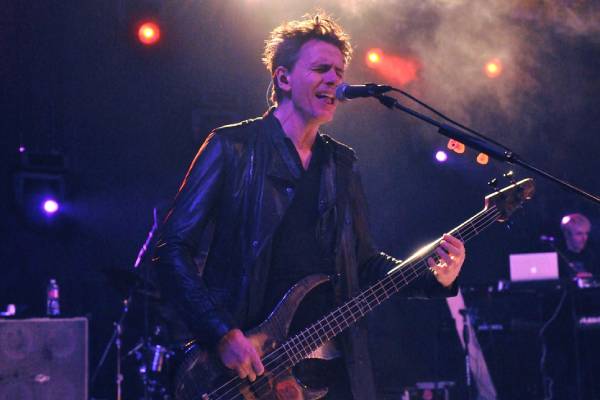 John Taylor has accumulated a hefty sum from his career in the music and entertainment industry. Image Source: Wikimedia Commons.

If you are a fan of the new romantic band Duran Duran, you will not fail to recognize its bass guitarist, John Tylor. Born Nigel John Taylor, he is a British musician, singer, songwriter, and producer who is one of the founders of the band.

John has seen massive success being with Duran Duran as it was an extremely popular band during the 80s. Likewise, the guitarist must be enjoying a comfortable life thanks to his earnings as a band member. Today, in this article, we will be looking into John Taylor’s net worth and earning sources.

John Taylor Net Worth And Earnings

The musician has performed as a Duran Duran member for many years. Besides that, he has also ventured into solo works and did collaborations. Combining them all, he must make considerable earnings.

As per Celebrity Net Worth, John Taylor’s net worth is $30 million. Now, let’s break down his income from various sources in his career in recording and film.

As mentioned above, Taylor is one of the founding members of Duran Duran. Along with his school friend Nick Rhodes and college mate Stephen Duffy, he formed the band in 1978 while attending campus at Birmingham City University.

Making $9 to $12.5 with each sale of its album, Duran Duran must have earned a massive amount from selling over a hundred million albums sales. Likewise, according to Social Blade, the band makes about $3.7K to $59.4K monthly and around $44.5K to $712.4K on a yearly basis. Additionally, Duran Duran also has its official merchandise line, including numerous products from t-shirts to wallets. The prices of their merch vary from $4.10 to $92.44. Plus, they have organized tours and concerts worldwide, which might have also collected a large amount of money.

As part of Duran Duran, the bass guitarist must have received his fair share from the album, merch, tour, and concert sales. Hence, John Taylor’s net worth of $30 million is a no-wonder.

The bassist left Duran Duran temporarily in 1997 to pursue and focus on his solo career in the music and entertainment industry. In 1999, Taylor also released two albums of previous material; Résumé and Meltdown. Later in the year, he signed a contract with the Japanese record label Avex Trax and released an album titled John Taylor.

However, it was listed as The Japan Album. The musician had an additional release titled Techno For Two under Avex in 2001. The table below shows the cost of some of John Taylor’s solo albums.

Furthermore, the 61-year-old put out an autobiography called In the Pleasure Groove: Love, Death and Duran Duran in 2012. He must have earned a remarkable sum from his book sales and solo recording career as well.

Salary From Acting And Guest Appearances

The guitarist has also made guest appearances in numerous projects. He made his first appearance in the pilot episode of a 1985 TV program called Timeslip. Later in the year, he appeared as a guest in the 1985 Miami Vice episode titled “Whatever Works” along with his former bandmate Andy Taylor and other musicians. He was the only one with spoken dialogues.

Likewise, Taylor made cameo appearances in The Flintstones in Viva Rock Vegas, Four Dogs Playing Poker, A Diva’s Christmas Carol in 2000, and That ’80s Show in 2002. He was also a panelist in the comedy quiz game Never Mind the Buzzcocks in 2001. Furthermore, the musician has contributed to many soundtracks.

John Taylor must have made a fortune from his acting career as well. He must have been paid quite well for his appearances in various TV and film projects.

The veteran musician is blissfully married to his wife, Gela Nash-Taylor. They live in Los Angeles but tend to spend several weeks a year at South Wraxall Manor. The property dates from the early 15th century and is one of the Grade I listed country houses located at South Wraxall in Wiltshire.

The mansion is set on 260 acres and consists of ten bedrooms, five cottages, a cricket ground, and an octagonal stone summerhouse. John Taylor and his spouse purchased the mansion in 2005. Although the selling price is unknown, the property was on the market for around $4.96 million (£4.075M) in 2004, as per a 2006 article.

Taylor must enjoy a luxurious and comfortable life with his spouse. Furthermore, he also shares a daughter named Atlanta Noo Taylor with his ex-wife, Amanda De Cadenet.

Well, a lavish life is rather well deserved for the bassist considering his longtime career. John Taylor’s net worth is likely to increase in the upcoming days as he is still active and goes on tours with his bandmates. We wish him and his family more success and happiness in their lives.