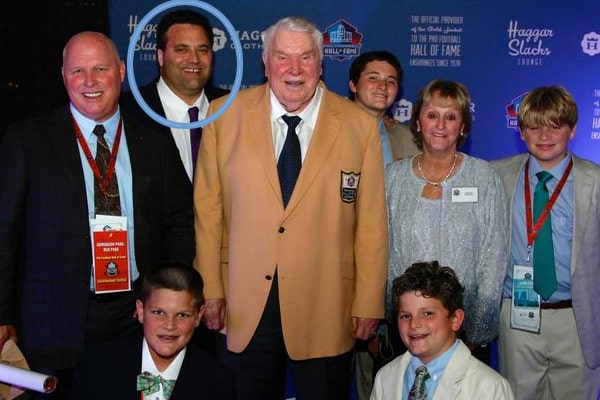 Joseph Madden, aka Joe Madden, is the son of one of the legendary football coaches, John Madden, and his wife, Virginia Fields. Joe’s father, John, was a former American NFL Coach, football player, and sports commentator. He had won various titles and awards during his career in American Sports. Similarly, Joe Madden’s mother, Virginia, was a teacher before her marriage to John.

Has An Elder Brother

John Madden and his wife, Virginia, were tied on a marital bond in 1959. With understanding, love, and trust for one another, they made their marriage last for over a half-century, and lived together happily and with contentment.

Aforementioned, the Madden pair welcomed their son Joseph in 1966. Besides Joe, John and Virginia have another son together, Michael Madden aka Mike Madden. Virginia gave birth to the oldest son of John Madden, Michael, in 1964.

Talking about the educational background of Joe, he completed his high school at Choate Rosemary Hall. After the completion of high school, Joe graduated with a BA in Organizational Behavior Management from Brown University.

Like his brother Mike, Joe is also a former football player. He also coaches football in the schools around the Pleasanton area.

The Madden Kinsfolks have a very close bonding. Although both brothers are married and have children, their love for each other has not lessened. In the present, Mike and Joe together run and manage the business started by their dad, John Madden.

Successor Of His Dad’s Company

In the early 90s, the fear of airtight airplane cabins led John Madden to establish a small production company in Pleasanton. Later, he realized the younger Madden’s interest in movie production. So, John soon built another production company ‘Goal Line Productions’ with a larger facility a couple of miles away.

The Madden father, John, gave the authority to his son, Joseph Madden, in 1998. At the moment, Joe, aka Joseph, is the president of the Pleasanton-based production center.

After getting the authority of Goal Line Productions, Joe expanded its client base and established it as a full-service production facility. He grew his dad’s business to 85 percent of all activity and its revenue doubled than the previous year. At present, the Goal Line is one of the favorite video and film production companies based in San Francisco.

Besides owning a production company, Joe himself is a producer. He worked as an executive producer in several films, including The Cooler. The 2003 movie, starring Alec Baldwin and William H. Macy, garnered two Golden Globe nominations and one Academy Award nomination.

Moreover, Joe produced numerous diabetes educational videos for the JDRF and some fundraising videos for a local diabetes charity, The Diabetic Youth Foundation.

Though Joseph did not follow his father’s footsteps in sports, his dad, John, is proud of his job. He is happy that his son, Joe, followed his business advice “Love What You Do.”

John Madden’s son, Joe Madden, is applying his degree in Organizational Behavior Management so well. Besides being a president of Goal Line Productions, he is the president, co-founder, and Vmersion Health manager. It is a publisher of social media applications specially designed for people with chronic health conditions. Through the novel use of a smart-media software platform, it helps to improve the lives of patients.

Furthermore, Joseph Madden is the partner of various organizations and businesses started by his father, John Madden. He runs two local hotels and a vineyard with his brother, Mike, and dad, John.

Sadly, Joe Madden lost his father, John Madden, on December 28, 2021. John unexpectedly passed away in the morning, and the unfortunate news was shared by the NFL on Tuesday night. Roger Goodell, the NFL commissioner, extended his condolences to the whole Madden family.

The news of his demise came only a few days after Joe Madden’s father, John’s legacy, was celebrated in FOX’s documentary, ALL MADDEN. The documentary featured the behind the scene look of John’s coaching career and also had an interview with the legend himself.

We hope Joe and the entire Madden family are taking care of themselves in this difficult time.

His Son Is A Type-1 Diabetic Patient

The secretive son of John Madden, Joe, has not revealed much about his life. However, he does not hesitate to open up about one of his three kids, Sam Madden. According to Joe Madden, his son, Sam, is a Type-1 diabetic patient.

For diabetes patients like his son, Joe and his family has taken several initiatives. In 2011, Joe and his colleagues founded a reward app, ‘Gluco-share.’ Gluco- Share creates a media platform exclusive to those living with diabetes, facilitating meaningful friend support.

Moreover, in 2007, Sam and his grandpa, John, advocated on Capitol Hill for renewing the particular diabetes program under the George W. Bush administration. Similarly, the family of John Madden is helping the diabetes community through their organization, Madden Charities.

John Madden’s son Joseph Madden has kept his wife’s and other kids’ information entirely away from the media’s reach. However, he often posts photos of them on his social media pages. We hope to see more pictures and some information about his family members soon in the upcoming days.

The masculine name Joseph, originally derived from the Greek ‘Ioseph’ which means increase or addition.