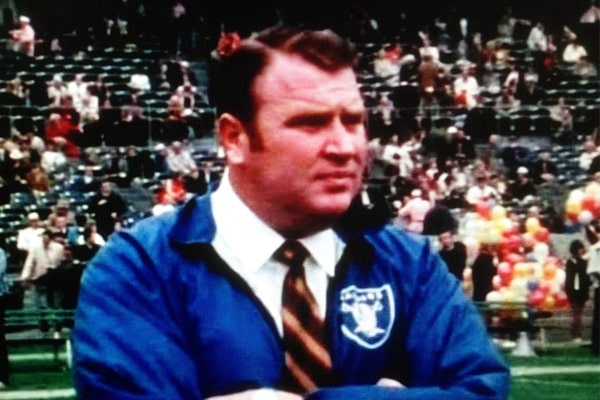 John Madden and his wife Virginia Fields are together since 1959. Image Source: Facebook.

John Madden was a football video game magnate and also a former football player. Madden was also the NFL head coach and a color commentator too for NFL telecasts. He was inducted into the Pro Football Hall of Fame to remember his decades of a football coach career. Moreover, John Madden also briefly featured in films like Christine, Little Giants, and The Replacements.

Besides gaining fame as one of the legendary football coaches, Madden also became famous for his dedication to his only wife, Virginia Fields. So, what might be the reasons behind the successful marital life of John Madden? Know them all here.

According to John Madden, he met his love Virginia for the first time at school when he was an undergraduate. However, his wife Virginia says that the fact is they met in a bar in Pismo Beach. It was not as if they hung out in bars. If the husband-wife duo had not been there on that one day, they might never have met.

Though both Virginia and John have a different statement to share regarding their first meeting, it never mattered at all. The two fell in love and hung out together for some months, or we say until Christmas of 1959.

Former coach John Madden took the wedding vows with his then-inamorata, Virginia Field, a day after Christmas of 1959. Their marriage ceremony took place inside the St. Mary of the Assumption Church in Santa Maria.

According to the Times magazine, at taking the wedding nuptials ceremony of John and Virginia, the bride was in a radiant gown. It was decorated with imported Chantilly lace over Deep Lustre ivory satin with Sabrina neckline edged with pearls.

Moreover, John’s best man at his big day was former NFL and USC coach John Robinson. Likewise, some other attendees were Dick Nolan, Kermit McKenzie, and Clarence Minetti of Guadalupe.

It is common for celebrity marriages to fall apart. However, despite the collapse of many, John Madden and Virginia Fields, aka Virginia Madden, have withstood the test of time. Obviously, like other famous personalities, John also dealt with a busy schedule during and even after his sports career. But it could not create any issues in his love life as he and his wife knew well how to deal with all the hindrances.

The main reason for the longevity of John and his lady, Virginia’s married life, is undoubtedly their understanding of each other. The couple was together so long that they could commune efficaciously with glances. Their looks were meaningful enough to make each other understand what they wanted to say.

Moreover, John Madden’s wife, Virginia Madden, is the axis around which the Madden household rotates. She took care of all the essential things of John and the members of the Madden family. Besides several antiques, Virginia has kept John’s one of the crucial gifts from his friends, a highway YIELD sign securely. Ted Hendricks, the three-time-All-America linebacker, gifted it to John while he retired.

Furthermore, John used to be away from his family for the better part of half a year every single year due to his career in sports. Virginia had to get used to having her husband with her only during the holidays. However, the distance never brought coldness in their marriage. John Madden’s wife always had a good insight into her partner’s busy schedule. And, most of all, the husband-wife duo trusted each other fully.

All the reasons mentioned above played a vital role in the fulfilling and enduring marriage of John and his wife, Virginia. The pair’s marital life crossed six decades, but their love for one another stayed the same.

Aforementioned, John and Virginia tied the knot in 1959. Over a half-century of their togetherness made the Madden couple proud parents of two talented sons, Michael Madden and Joseph Madden. Moreover, they are grandparents to five kids from their sons.

John Madden’s wife, Virginia, gave birth to their first child Michael, famous with the name Mike in 1964. Similarly, they welcomed their other son, Joseph, nicknamed Joe, in 1966. Both Madden kinfolks are very attached and meet each other often during their holidays and other special occasions.

Maintaining a marriage for years and years is a challenge for many people. However, John Madden and his long-time wife Virginia Madden proved that living together for decades is workable. And, they established the evidence that if there is understanding, love, and trust between both partners, a long-lasting relationship is possible.

Aforementioned, Virginia Fields’ spouse of more than six decades is a former NFL player, coach, and sportscaster. And thanks to his long and successful career, John Madden is a celebrated football icon. Since his playing career, John had been awarded numerous titles owing to his success.

And continuing the celebration of John Madden’s legacy, on Christmas Day 2021, FOX Sports released a documentary titled ALL MADDEN. The documentary showcased Virginia’s husband’s career as a coach. It also featured a long-awaited update about the former sportscaster and an interview with the man himself.

Moreover, other NFL coaches and sportscasters also talked about John Madden’s legacy and the impact he had on the game. The celebration of John’s life is undoubtedly a proud moment for the whole Madden family. But no one might be happier about it than Virginia, as she was by her husband’s side during his rise to fame.

Virginia Lost Her Husband In 2021

While Christmas Day in 2021 was a happy day for the Madden family, the days following that were filled with sadness. Sadly, Virginia Fields lost her husband of over six decades on December 28, 2021. The news came as a shock to everyone, and tributes for the football legend started soon after.

The NFL announced the sad news of John’s passing on Tuesday evening, and commissioner Roger Goodell extended condolences to the Madden family.

Losing your life partner is undoubtedly one of the hardest things one has to go through. So, we hope Virginia has a great support system surrounding her to go through this difficult time.