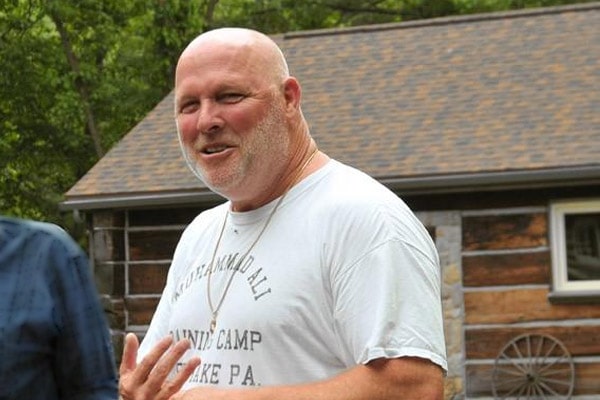 John Madden was a well-known American former analyst and broadcaster for NFL games on FOX, ABC, and CBS. Madden was also a former football player and a coach too. In addition to his NFL achievements, John lent his surname to a series of video games Madden NFL which became a cultural sensation.

One of the best-known personalities in NFL history, John Madden, was married to his wife Virginia Fields for over a half-century. With his long-time lady, Virginia Fields, John welcomed two sons who are also in sports. Here, meet John Madden’s son, Micheal Madden.

Aforementioned, former NFL coach John Madden was in a marital relationship for over five decades. Madden took the wedding vows with his wife, Virginia Fields, aka Virginia Madden, in 1959.

Michael Madden and his family moved from his old residence to Pleasanton, California, when he was just three years old. Madden attended Pleasanton School before completing his high school from the Foothill High School near his residence. Later, he enrolled at Harvard University from where he majored in English.

Although Michael, famous by the name Mike, is the son of a celebrity, his childhood went smoothly just like a normal kid. His parents, John and Virginia, always made sure to keep the unnecessary media dramas not enter his life.

People might get a handful of opportunities to define who they are by their choices. The son of a legendary man, John Madden, Mike chose to preserve another icon’s legacy. Michael decided to restore Muhammad Ali’s boxing Camp in Deer Lake, Pennsylvania, soon after the demise of boxing legend Muhammad Ali.

Though John Madden’s son grew up with Ali’s poster in his bedroom, he had never heard of Deer Lake until 2016. In 2016, John was in the hospital recovering from hip surgery, and Mike was with him. And, just at the same time, the news of Muhammad Ali’s passing comes on ESPN. While driving back home, Mike turned on to a couple of sports talks radio. But none of the stories about Ali aired on the radio satisfied him. He thought none of those broadcasters remembers Ali the way he ought to be remembered.

So there, Mike’s mission to keep Muhammad Ali’s legacy alive began. He went home, googled about Deer Lake, and found out Ali’s Training Camp got a new name, Butterfly and Bee Bed, Breakfast, and was on sale. And, without any delay, Mike flew there, had it under contract, and some weeks after purchased it for $520K from a Reading karate instructor.

Purchasing and giving a new life to Ali’s Training Camp, Michael’s succeeded in preserving Ali’s legacy for future generations. Kudos to him and his great initiation to keep Muhammad Ali’s bequest alive.

Following His Dad’s Footsteps In Sports

Like most celebrity kids, John Madden’s son, Michael, also seems to be following his great dad’s footsteps in sports. He is passionate about two things, football and golf.

It has been two decades since Mike began coaching freshman football at his alma mater, Foothill High School. However, it is not sure if he is still continuing his career as a sports teacher.

Moreover, Mike’s passion for golf is also a must to mention. He used to go over to Ireland for a week or two every year to play golf. And we hope he still is intense on the game.

Furthermore, Mike appeared in one episode of the documentary A Football Life in 2017 alongside his father, John Madden. His dad performed in the same sports documentary for nine seasons from 2011 to 2018.

On Christmas day 2021, a documentary titled ALL MADDEN, celebrating Mike Madden’s father, John Madden was released on FOX Sports. The project took a look behind the elder Madden’s life as a coach and also had a candid interview with the former NFL player himself.

Other NFL coaches and sportscasters also talked about the impact Mike’s father had on the game and talked highly about John. Seeing the praise received by their patriarch must be a proud moment for the Madden family.

The fifty-six-year-old son of John Madden with Virginia Fields, Mike, runs a real estate business with his brother and dad. He is the president of a real estate company named ‘Red Bear Property Management,’ One of Madden boys’ notable projects is the Blacksmith Square, a park in Livermore, California.

Furthermore, Mike, his dad John and his brother, Joseph, own two local hotels and a vineyard in Pleasanton, California.

As for now, John Madden’s son, Mike, aka Michael, is living a bling life with his big family, including his wife, children, brother, mom, and dad. He seems to be a pro, just like his dad, in keeping secrets as he has revealed no details about his wives and children. We hope he gets active on social media platforms, too, so that his fans can learn a lot more about him than now.

Sadly, Mark Madden’s father, John Madden, died on December 28, 2021, only a few days after the documentary, ALL MADDEN, was released. The NFL announced on Tuesday night that John had unexpectedly passed away in the morning.

Moreover, NFL commissioner Roger Goodell extended his condolences to the whole Madden family. Fans and other individuals involved in the current football scene have also expressed their grief in losing a legendary figure of the game. Many are mourning the loss of the Coach.

We send our love to the Madden family in this difficult time.

The masculine name Michael is of Hebrew origin, which means ‘who is like God?’