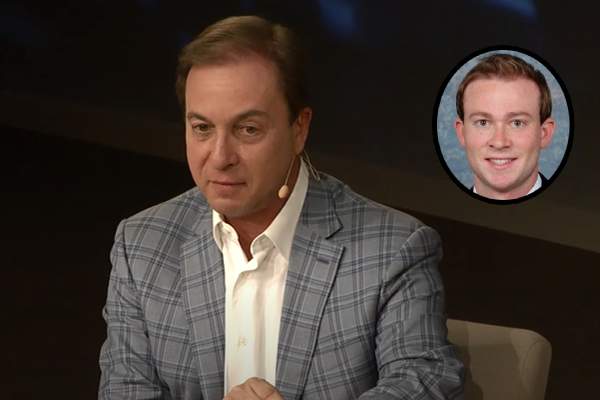 Joe Lacob, or Joseph S. Lacob, is an American business tycoon with a fortune worth $3 billion. Born Joseph Steven Lacob, he has been a partner at Kleiner Perkins since 1987. He is the Co-Executive Chairman and CEO of the Golden State Warriors of the National Basketball Association.

In addition, the 66-year-old is a proud father of his four grown children. Many people may be eager to know how his kids are doing nowadays and whether they are involved in his business. So, in this article, we will learn more about Joseph S. Lacob’s son, Kirk Lacob, through five interesting facts about him.

Kirk Lacob was born Kirk Adam Lacob to the businessman and his ex-wife, Laurie Kraus Lacob. The latter is the Managing Director of 4K Productions, an independent film production. Unfortunately, it is unknown how and when the one-time couple met and started dating. Moreover, information regarding their marriage and divorce has not been revealed to the public yet.

Nonetheless, Joe Lacob now enjoys a blissful marital life with his current wife, Nicole Curran. Kirk Lacob’s stepmom is a philanthropist and serves as the Board President of the Warriors Community Foundation. It is also known that the Lacob-Curran pair met each other at a Pebble Beach golf tournament and got engaged in 2009. However, it is unclear when the lovebirds married.

Grew Up With Three Siblings

As mentioned above, Kirk was born to Joseph and his former spouse, Laurie. But, he isn’t the only child his parents welcomed. The ex-duo was blessed with three more kids when they were still married. Joseph S. Lacob‘s baby boy has two sisters, Kelly Lacob and Kayci Lacob, and a brother, Kent Lacob.

Unfortunately, the birth details of the Lacob siblings have not been revealed yet, making it difficult to know who amongst them is the oldest. Nonetheless, all of them are leading happy lives of their own. It must have been fun for Kirk to grow up with his brother and sisters.

Is An Executive Vice President

Joseph S. Lacob’s son went to Stanford University and graduated with a BA in Science, Technology, and Society in 2010. While attending college, he was the founder and president of Standford Men’s Club Basketball. Then, he worked as a general manager for the Dakota Wizards, presently Santa Cruz Warriors, of the NBA G League for over three years.

Kirk currently serves for the Warriors, where his father is the majority owner. Furthermore, he has been serving in the front office for the Golden State Warriors for the past few years. He was first a Director of basketball operations for almost two years before promoting to be an assistant general manager from 2012 to 2019. At present, Kirk is an Executive Vice President of Basketball Operations for the team.

In addition, he has also been a member of the Bay Area Board at Positive Coaching Alliance since April 2012. As such, Kirk Lacob’s net worth and salary must be significant.

The former Warriors GM is a devoted and loving husband to his spouse, Molly Lacob. Born Molly Ann Sundstrom, Kirk Lacob’s wife is a Santa Clara University School of Law graduate and works as a Senior Labor & Employment Counsel at KQED. The pair first met each other through a set-up on Cinco de Mayo in 2013. And, by the end of the day, they became a couple. After dating for about four years and a half, in 2017, Kirk went down on his knee and asked Molly’s hand for marriage, and she said yes.

The lovebirds’ wedding ceremony was held on July 21, 2018, at the Four Seasons Hotel San Francisco, with the presence of 295 guests. With them recently celebrating their wedding anniversary, the now-husband-wife duo has been enjoying blissful marital life for four years as of 2022. In addition, the two frequently post pictures of one other on their social media handles, showcasing their love and affection.

Is A Doting Father Of Two

In May 2020, almost two years after the duo married, they announced they were pregnant with a set of twins. Both posted the same picture of four pairs of shoes, two of which were of babies, on their Instagram handles. Finally, Kirk Lacob’s sons, Lincoln Prime Lacob and Pierce Atlas Lacob arrived in October 2020.

The twins are about a year and a half and will turn two years old in October 2022. The Vice President must be a loving and doting dad to his adorable little babies. Nonetheless, there is no doubt that Joseph S. Lacob’s son enjoys a blissful and comfortable life with his wife and kids. We wish the family of four to have a healthy and fun-filled life together in the future.

The given name of Joe Lacob’s son, Kirk, is a Scottish word that means “church.”