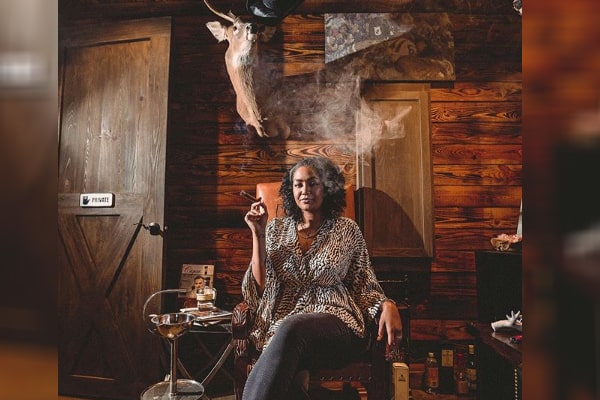 Well, parents like Karl Malone and Kay Malone are bound to create a great child, like Kadee Malone. The beautiful couple of Karl and Kay is married since 1988 and have welcomed four adorable children.

Karl, who is arguably the most significant power forward in NBA history, is a total softie when things are about family. Although Malone made a few questionable choices, he has a healthy relationship with all of his children. Most of them have taken after him, but Karl and Kay Malone’s eldest daughter, Kadee, is very similar to him.

Kadee Malone Has A Fierce Personality

Well, this father-daughter duo suits the idiom ‘like father like daughter’ as they share the same fierce attitude and dominant presence. Born the first from the retired basketball player, Kadee Malone knew the world was watching her.

Furthermore, Kadee seems to take a lot from her father and her interest in the cigar business; the contagious smile is all inclined towards her father, Karl.

Likewise, born on  November 8, 1991, and the eldest of four, Kadee grew up as a big sister and a loyal friend. Moreover, as a player’s child, she was an athlete and witnessed the scrutiny first hand. Karl Malone’s daughter further revealed that she was a nervous child and had a lot of acne on her face.

Despite all of the hardships, Kadee grew up to become one of the most strong-head with a charming personality. She is an entrepreneur. Likewise, Kadee also runs a company her father passed on to her. She is the boss lady in short.

Kadee and Her Siblings

Kadee being the oldest in the Malone family, saw everything from her father being called a family man and being backlashed for abandoning his other three children outside his marriage.

Malone’s eldest daughter and the Hall of Famer, Karl, share an incredible bond as a father and a daughter. But they also possess an excellent understanding as business people. She is equally close to her mother as she doesn’t forget to wish her on her birthdays.

Besides sharing a bond with her parents, Kadee is also close to her siblings; Kylee Malone, Karl Jr. ‘K.J.,’ and Karlee Malone. Kylee is anticipating becoming a shop owner like her elder sister while brother, K.J., started to pursue a career in law enforcement while Karlee is into the modeling world.

Besides her blood-related siblings, she also has three half-siblings who brought significant criticisms towards Karl Malone.

Malone’s twin children, Cheryl Ford and Daryl Ford from his relationship with Bonita Ford, are doing very well. Cheryl Ford followed her father to the NBA world and managed to win three WNBA championship. All while her brother, Daryl, is living a quiet life.

Likewise, Malone’s half-sibling and former American football offensive tackle, Demetress Bell, was rejected most of his lifetime. That’s hurtful, and therefore, Karl gained a lot of haters and a whole article to prove him bad.

However, with time, growth, and more maturity, Kadee Malone’s father is maintaining a healthy relationship with all his seven children.

Aforementioned, Karl Malone’s daughter is a boss lady and a successful entrepreneur. According to her Instagram, she co-owns two businesses along with her father. Karl entrusted Kadee to take the lead and handed her the keys.

Kadee’s vision for Legends Cigar and Vape was broad and a little different from her father. The General Manager of the Legend Cigar and Vape, Kadee, wanted to create a rustic lounge with a cozy environment and space that would allow people to lounge, smoke, and chatter.

From the opening of the place to date, it has made significant progress. Furthermore, since Kadee took over the place, she has been driving the company with a godly force. Kadee made the company more steady and broadened it’s offerings from cigars to vape, and now CBD.

The father-daughter duo is looking forward to the future and the expansion of the Legends lounge.

Kadee Malone is a grown woman with a steady career and her own company. At the age of 29, she has achieved everything, including a committed relationship.

As stated, Karl Malone’s daughter, Kadee, is now engaged to be married to her best friend, Cedric Johnson. The couple seems to be dating for quite a while before taking significant steps.

Furthermore, their wedding is right around the corner and has announced it on October 31, 2020. Kadee is unapologetic, and she speaks her mind, and oh boy did she clarified that she does not want nosey people at her wedding.

Kadee further notified that her wedding is going to be pretty small and intimate, surrounded by friends and families. Also, because of the global pandemic, Covid-19, huge gatherings is impossible, hence apologized for the missed invitation.

Besides having an intimate wedding and all, Kadee shares a home with her fiance they bought very recently. Mama Malone seemed proud of her baby girl and boasted about her success via Instagram post.

Furthermore, let’s also pray for Kadee Malone’s brighter future as she is already shining bright like a sunny day.

The name Kadee is of English origin, which means first.