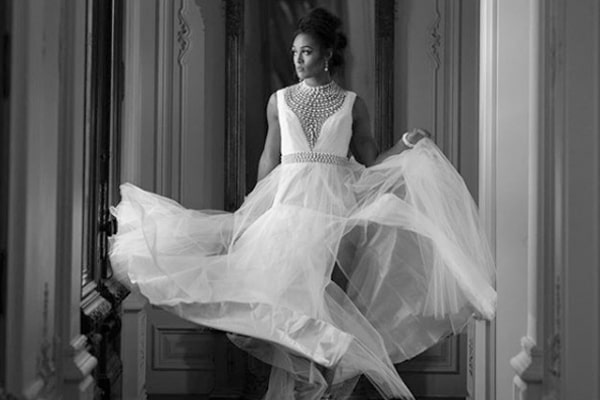 Karlee Malone is a gorgeous lady pursuing her career as a model. Image Source: Malone's Instagram.

Karl Malone is one of the greatest NBA players in history. The retired professional basketball player is nicknamed ‘The Mailman’ and is a 14-time NBA All-star, ranked second all-time scorer in the NBA history behind Kareem Abdul-Jabbar.

Besides Malone’s victorious career, he has a beautiful family life filled with a few controversies but was considered to be a family man. He fathered seven children with different women, including four with his long-time partner,  Kay Kinsey. As for now, we will be tailing the pair’s youngest daughter, Karlee Malone.

Youngest Of Four Children From Marriage

Aforementioned, Karl is one of the most notable basketball players in NBA history and managed to become the best of the best. The Hall of Famer priorities his family and has four children with his wife, Kay Kinsey. The pair shared their vows on December 24, 1990.

The family of six enjoys their time together and share a great bond. Especially, Karlee, being the youngest, she is the star of the family and often hangs out with her parents. Furthermore, Karlee Malone’s mother, Kay, shares their moments and never forgets to wish her on her special days like birthdays.

Moreover, in such a birthday post, Kay mentioned that Karlee is her partner in crime. She reminisces how she used to dress her up as she grew, and today it’s the other way round.

Reading mama Malone’s caption, it seems like Karlee Malone is the mood lighter and enjoys making people smile around her. It’s a great trait to have. By the way, Karl Malone’s daughter has ditto smile as her Miss Idaho USA winner mom, Kay Kinsey.

Besides Karlee’s siblings at home, she has three more siblings her father has paternity rights to. Karl Malone accepted having children outside of his marriage when the tabloids tsunami began rambling.

Karl Malone’s twin children and Karlee’s half-siblings, Cheryl Ford and Daryl Ford are unbeaten in their rights. Papa Malone met the twins when they were seventeen years old, and they had a pretty warming get-together.

Following Karl Malone’s footsteps, Cheryl went on to play in WNBA, and unlike her father, she won the WNBA championship not once, not even twice but thrice. While Cheryl enjoyed her career, her brother, Daryl, remained silent about his whereabouts.

Besides Cheryl and Daryl Ford, Karlee Malone has one more half-sibling, which Karl rejected for most of his life, Demetress Bell. When the world reckoned Karl as Olympic gold medalist and plausibly the best power forward ever, the former football offensive tackle, Bell had to act like his mother went to a sperm bank to conceive him.

Must have been pretty harsh for Karlee’s half-brother, but it just made him grind harder for success. More pleasantly, Karl, Demetress, Cheryl, and Daryl are working on their relationship, so all is well that ends well. Right?

Pursuing A Career As A Model

Most of Karl Malone’s children are either into sports or are enjoying their own life privately. Whereas, Malone’s daughter, Karlee, is pursuing her career in the modeling world.

Although it is a little tight being a daughter of such a huge personality and is often overshadowed by their names or presence, Karlee is managing to keep up with her career quite well.

Furthermore, Karlee is currently associated with SLU & AMAX. She has been pursuing her modeling career and has been working with SLU and AMAX since 2019.

Karlee Malone’s Instagram screams her ongoing career and shares a lot of pictures there. Besides sharing jaw-dropping photos, she also uploads one or two with her parents captioning it through her heart.

Engaged To Be Married

It might be yesterday that Karl Malone and his wife, Kay Kinsey, welcomed their youngest daughter, Karlee, but she has grown into a glorious woman and is all set to have her own family.

Yes, Karl Malone’s child, Karlee Malone, is engaged to be married to her long-time boyfriend, Brent Diaz. Well, Karlee Malone’s to-be-husband is surely a lucky guy to have found someone like her. She often shares pictures with him and shares her love with the world.

Garnering over 26.1k followers on Instagram, Malone’s daughter announced her engagement on June 13, 2020. 2020 isn’t that bad for Karlee, eh?

In an upload, Karlee captioned that the three and a half years of love, laughter, and lots of travel was just a beginning while her pictures radiated the happiness. Well, the fans are eagerly waiting for the wedding bells.

The name Karlee is a German name, which means womanly; strength. The name resonates with Karl Malone’s daughter, Karlee.