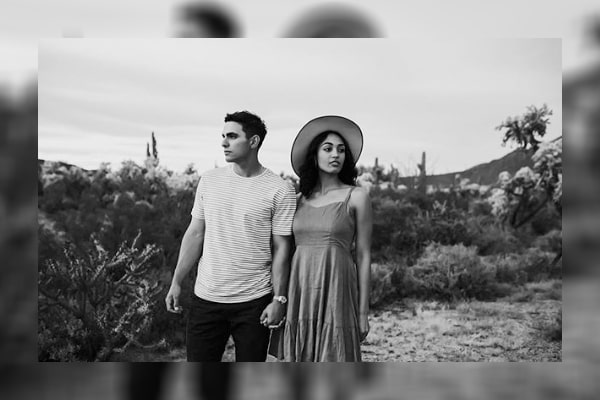 Karl Malone is a living legend in NBA history. Nicknamed ‘the Mailman,’ Malone is the second all-time scorer in the NBA behind Kareem Abdul-Jabbar and is possibly one of the most excellent power forwards in NBA.

The retired professional basketball player Karl Malone enjoyed a very successful career, although championship was beyond his reach. Likewise, he is also experiencing a blissful marital life with former Miss Idaho USA, Kay Kinsey. The pair welcomed four children together, and most of them are engaged to be married.

Today, we will be tailing the Karl Malone’s youngest daughter, Karlee Malone’s fiance, Brent Diaz. So, brace yourself for some of his impressive achievements.

Karl Malone’s daughter, Karlee Malone, is a grown woman and has found a man for herself. Before getting into their lovelife, let’s have a little background check on Karlee Malone’s boyfriend/fiance, Brent Diaz.

Born on March 22, 1996, to Rodolfo Diaz and Miriam Diaz, Brent Diaz has always been a baseball enthusiast. He has been pursuing his career as a professional basketball player since 2017 with Milwaukee Brewers. He was assigned to many minor leagues like Wisconsin Timber Rattler, AZL Brewers, etc. before Milwaukee Brewers.

Besides being a professional baseball player, Brent is a family man as he priorities his family the most. He has four siblings; elder brother, a twin sister, and a younger sister, whom he never misses wishing on their birthdays. Furthermore, Karlee’s boyfriend never misses a chance to thank his parents for giving him boundless opportunities.

Thus, it looks like Malone’s partner seems to be responsible and respectable. So, let’s get into the exciting part, i.e., their relationship.

Since the NBA star, Karl Malone’s daughter remained away from the media scrutiny, her relationship status and growth were shadowed too. However, the 22-year-old Karlee Malone has achieved almost everything in her life from a stable career to a partner.

The aspiring model, Karlee Malone, and her boyfriend, now fiance, have been dating since 2017. According to Karlee’s Instagram post on June 13, she implies their relationship as three and a half years of love. Hence they must have been together mostly since 2017.

Both Karlee and her boyfriend do not shy away from sharing their love via their social media handle. The pair first started appearing on one another’s’ Instagram since 2017, and they still look very much in love.

Once a young love has now blossomed into a beautiful relationship, and they have taken a massive step this year.

As mentioned earlier, both Karlee and Brent are young, but they have decided to take one step further this year.

Karlee Malone’s boyfriend proposed her in June 2020. The beautiful girl was beyond excited for the pleasant surprise. She took her excitement to Instagram and announced their engagement.

Furthermore, Karlee seemed excited and even captioned that this was just a beginning. She seems optimistic while reminiscing their time as a young couple and looked forward to all the things they will probably be doing as fiance and fiancee.

However, Karlee is not the only engaged daughter of the NBA star. Malone’s eldest daughter, Kadee Malone is also engaged and has announced her marriage this October.

Let’s hope we get to hear two weddings in the Malone family within 2020. Or will Karlee and Brent wait as they are young and have lots to accomplish? What do you think?