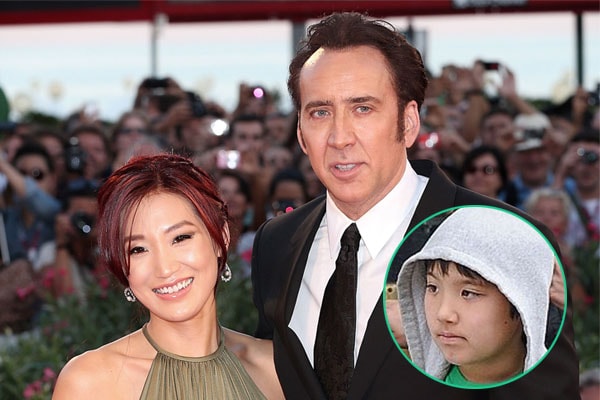 Kal-El Coppola Cage, who is the son of Nicolas Cage with his ex-wife Alice Kim Cage, has recently surfaced on the internet. Kal-El is too young at the moment to start his own official Facebook and Instagram accounts. However, his parents and elder half-brother Weston Coppola Cage have made sure Kal-El gets all the visibility he needs on social media.

Nicolas Cage’s son Kal-El Coppola Cage was born on October 3, 2005. Nicolas had Kal-El with his ex-wife Alice Kim. Little Kal-El is half-Korean as his mother Alice is of Korean descent. Before marrying Alice, daddy Nicolas was married to his gorgeous ex-wife Patricia Arquette and Elvis Presley’ daughter Lisa Marie Presley.

Kal-El, now into his teenage years, is undoubtedly enjoying the stardom of his father. While the “Con Air” actor is being accused of abuse by his ex-girlfriends and Nicolas’ former wife Alice Kim, Kal-El seems to love his father. During the day, Kal-El commutes to school from his residence in Las Vegas, where he lives with his family.

However, we have good news that Nicolas Cage’s son Kal-El Coppola is an aspiring actor like his legendary father. He recently starred as a voice actor in DC Comics’ Batman franchise. He reportedly voiced young Bruce Wayne for a movie.

Meanwhile, Kal-El enjoys the occasional fun times with his elder half-brother, Weston Coppola Cage. Reportedly a psychiatric patient, Weston Coppola is not the biological sibling of Kal-El, as he was born to his mother and Nicolas’ former girlfriend Christina Fulton. Likewise, Weston is frequently in the news with petty controversies and police arrests. However, Weston is still alive and kicking despite rumors of his death.

Despite these bitter facts about his half-brother, Kal-El does not discriminate Weston based on his actions. Weston Cage has a kind heart, as he too loves his younger half-brother and makes sure he has a good time with him. Weston is currently living a happy married life with Hila Aronian aka Hila Cage Coppola. Kal-El also has a nephew named Lucian Augustus Coppola, Weston Cage’s son with ex-wife, Danielle Cage.

Actor Nicolas Cage got hitched for the fifth time to his 26-year-old girlfriend, Riko Shibata on February 16, 2021. The couple exchanged vows in an intimate wedding at the Wynn Casino in Las Vegas.

The bride looked beautiful in black handmade Japanese Bridal Kimono from Koyoto and held a bouquet of yellow and red roses. Likewise, the bridegroom looked dapper in a black Tom Ford Tuxedo.

After the beautiful fairy-tale ceremony, the newlywed couple was joined by Cage’s third wife and Kal-El’s mother, Alice Kim, with whom he has maintained a good friendship.