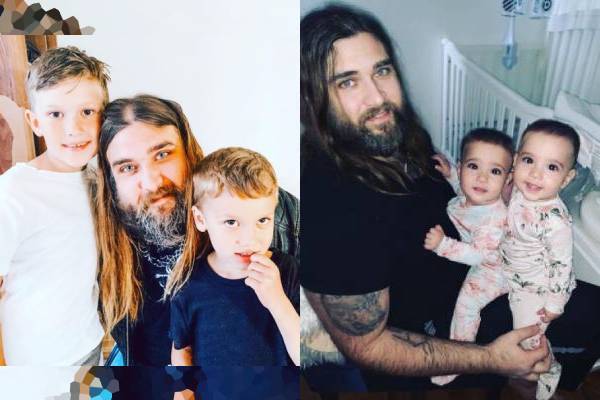 Nicolas Cage is an actor and filmmaker from America. Born into the Coppola family, Nicolas has acted in several movies and series, which has helped him gain immense fame and fortune. Not only that, but he has also garnered several awards and accolades, including a Screen Actors Guild Award, a Golden Globe Award, and an Academy Award.

Following in his footsteps, Nicolas Cage’s son, Weston Cage Coppola, born Weston Coppola Cage, has established himself as one of America’s famous actors and producers. Because of the fame that Weston has gained from his professional career, his fans are curious to know about his personal life too.

Well, Nicolas’ son is a doting father of four, but very little is known about them. Thus, in this article, let’s learn in detail about Weston Cage‘s children and how they are growing up.

As stated above, the famous actor and producer, Weston is the father of four, two sons, and two daughters. He shares his two sons with former wife, Danielle Cage, whom he married on November 11, 2013. Among them, Lucian Augustus Coppola Cage is Weston Cage’s firstborn. Weston and his ex-wife welcomed Lucian on July 1, 2014, at 3:14 p.m.

While speaking with Us Weekly, Lucian’s mom explained their choice of a baby name. Danielle stated that she chose the name Lucian since it was of Romanian descent just like herself, and Augustus is Weston’s grandfather’s name and the pair wanted to honor him.

Weston’s son is growing up and is enjoying his life with his siblings. He seems to love soccer and in September 2018, Lucian’s dad uploaded a photo of him after his team won. And as per Weston Cage, Lucian scored a beautiful goal.

Nicolas Cage’s grandson, Lucian Cage might choose to play soccer professionally. But even if he doesn’t, we hope he finds success in whatever he pursues in the future.

As stated earlier, Weston Cage has two kids with his ex-partner, Danielle Cage. Two years after the birth of Lucian, Weston Cage’s son, Sorin Reid Cage Coppola, was born on May 29, 2016. In December 2015, Sorin’s mom revealed the happy news about her pregnancy.

Moreover, Sorin’s parents have not posted much about him on their social media pages. His dad and mom are no longer together as they separated in 2016, the same year he was born. After the divorce, Sorin’s mom was granted sole legal and primary physical custody of him and his brother.

In addition, the court decided that Weston had to pay $8,000 monthly in family support, including car payments, health insurance, and rent. However, this amount came from the $16K he received as a monthly gift from Nicholas. Therefore, Nicholas Cage seems to have paid for his grandchildren’s child support.

The obligation to pay family support ended in the New Year of 2019, and starting January 2019, Sorin’s dad was only responsible for child support. Nevertheless, Weston Cage’s children with Danielle must be having a wonderful time growing up together.

After Weston’s marriage with Danielle Cage ended, he began dating Hila Aronian. The love birds got married on April 28, 2018. The pair had gotten engaged in May 2017. Two years after their nuptials, on April 8, 2020, Weston Cage’s twin daughters Cyress Zara Cage Coppola and Venice Zohar Cage Coppola were born.

Cyress and Venice’s mom took to Instagram in May 2020 and shared the news of their birth. She had announced her pregnancy in September 2019, and even disclosed the little ones’ names. Furthermore, Weston’s wife often posts adorable pictures of the twins.

Nicolas Cage’s grandchildren are growing up having a wonderful time with each other. However, among Weston Cage’s children, his son, Sorin, has remained away from the spotlight. On the other hand, the actor’s daughters are regularly seen on Hila’s social media feed.

The name Sorin has a Romanian origin, and it means Sun. The maiden name Reid has an English origin, which means Red Headed.

The name Cyress might have been derived from the Persian name Cyrus, which means Heir To The Throne. Similarly, the name Zara has an English origin, meaning Princess.

Cee Lo Green’s Son Kingston Johnson – Is He Involved In The Music Industry?