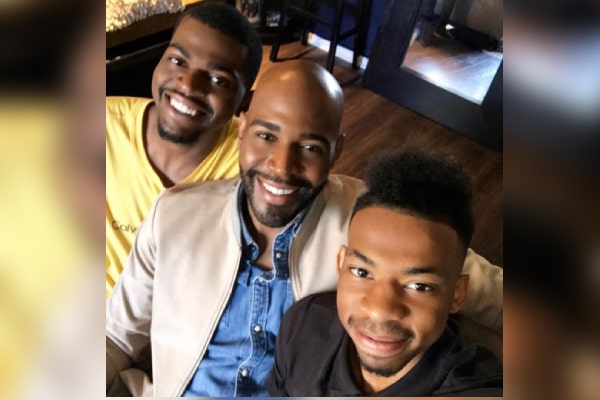 Karamo Brown, born Karamo Karega Brown, is a renowned television host, reality television personality, author, and actor of American nationality. Karamo has been involved in the entertainment industry since 2004. He currently stars in the Netflix series Queer Eye. Formerly, the talented actor worked on the MTV reality show The Real World: Philadelphia.

After working on the hit TV series, not only did Brown’s professional life heighten, but his personal life also gained significant attention. Well, the Texas native is a proud father of two lovely kids. Thus, in today’s article, let’s get to know Karamo Brown’s children, including their interests.

Karamo Brown came out as a proud gay man when he was 16 years old. Before that, he dated girls, and his last lover in high school, when he was 15, became pregnant with his child. However, Karamo Brown’s then-girlfriend never told him about the baby, and she moved away. As a result, the actor didn’t know anything about his biological son for a decade.

After ten years, the activist received a subpoena for child support. That is how he learned about his son, Jason Brown, born in 1997. In an interview with Parents, the Queer Eye star said that the news made him confused, sad, angry, and weirdly excited to be a father, but he also felt lost.

The star went on to support his ex-girlfriend and said not to blame her because she didn’t make that decision, but adults around them. The Real World: Philadelphia actor immediately took full custody of his son, Jason.

At the beginning of Karamo’s fatherhood journey, he learned that his little boy had a half-brother, Chris Brown. Afterward, Jason Brown’s dad went on to take legal guardianship of Christian Brown, nine at that time, in 2011.

Furthermore, the TV host gave his baby mama so much praise for allowing him to support in raising their kids. Besides, he seems to be enjoying his journey as a doting dad. While Jason Brown’s parents seem to be on good terms, many might be curious regarding his dad’s current partner.

Brown is currently dating a Los Angeles-based photographer, Carlos Medel. The couple began their romantic relationship in May 2021. Karamo Brown’s children might have a good relationship with his current beau. Before that, he and his then-beau Ian Jordan had exchanged the rings. But, he broke his engagement with his fiancé, in 2020.

Also Read: Take A Look At How All Of Rob McElhenney’s Children Are Growing Up

Karamo Brown’s son, Jason, came out as pansexual at the age of 21. The term means he is attracted to an individual for their personhood, not their gender. When the star’s boy opened up to him, he felt betrayed for lying to him. The father-son duo revealed that the emotional situation only strengthened their bond.

Furthermore, as a part of the healing process, Jason and his dad have also written a children’s book together named I am Perfectly Designed. It is described as a story about loving who you exactly are and a celebration of the parent and kid’s love.

Talking about his profession and career, the eldest Brown is involved in the entertainment industry. He has appeared as a guest in a few TV series and podcasts, including Today, Entertainment Tonight, Celebrity Family Feud, and Karamo: The Podcast. Furthermore, in an interview in 2018, he revealed that he was trying to pursue his dreams of being an executive producer and a host. Likewise, as per a 2019 article, he was studying acting at UCLA. But, it is not known if he has graduated.

Chris Is Into Hip-hop

Karamo Brown’s son, Chris, aspired to become a rapper. In a talk with Slate in 2018, Chris’ brother revealed that their father and mother support their choices. Hopefully, he is working hard toward executing his dreams and goal.

The Brown brothers also talked about their relationship with their mother. Chris’ sibling told the magazine that he talks with her every single day and is a supportive mother. As per Brown’s sons, she loves to watch the Queer Eye show.

Nonetheless, Karamo Brown’s children have grown up and are working on establishing their careers. They are lucky to have such supportive parents. We wish the Brown brothers a successful career and a happy life ahead.

Jason is of Greek or Hebrew origin, which means Healer.

The name Christian came from the Greek word Christoforos which means Follower of Christ.