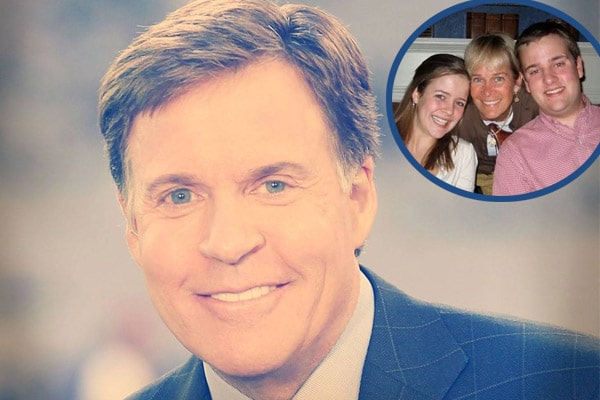 Bob Costas, born Robert Quinlan Costas, is an American sportscaster for NBS Sports. He is regularly serving as a sports analyst in NBC Sports since 1980. Besides, Costas worked as the prime-time host of eleven Olympic games from 1992 to 2016. Moreover, Bob Costas also once hosted an interview show ‘Studio 42 with Bob Costas.’ To date, Costas has won several Emmy Awards for his outstanding work.

The sports commentator Bob Costas took wedding vows with his first wife, Carole ‘Randy’ Randall Krummenacher, in 1983. They enjoyed their married life happily for a decade. However, various marital issues created cracks in their relationship. As a result, the then husband-wife duo, Bob and Carole, ended their marriage with a divorce in 2001.

During the togetherness of Bob and his former wife, Carole Krummenacher, Carole gave birth to Bob’s first child, a son, Keith Michael Kirby Costas, in 1986.

The story behind how Bob Costas’ son got his name began as a gag. While Carole was pregnant with Keith, Bob half-kiddingly promised to Late Kirby Puckett that if he bats over 350 by the time his child was born, he would name the baby Kirby.

By the time Bob welcomed his son, Keith, the former American baseball player, Kirby had scored around .372. At first, Keith’s parents had not added the name Kirby to his name. However, Puckett reminded them of the agreement later. And the birth certificate changed to Keith Michael Kirby Costas.

Aforementioned, Keith Costas is the oldest child of Bob Costas with his ex-wife Carole. Besides Keith, his parents have a daughter together named Taylor Costas.

The younger sister of Keith Costas, Taylor, was born in 1989. She is a graduate of Boston College. After her graduation, she followed her father’s footsteps to the American Entertainment Industry as an associate producer on NBC and other broadcasting channels. Bob Costas’ daughter is the winner of a Sports Emmy for her performance as associate producer on NBC’s coverage of the 2012 Summer Olympics.

Keith Costas is very secretive when it comes to his personal life. So there is not any information available for the public regarding the relationship between the Costas siblings. However, we hope they have a great bonding behind the camera.

Bob Costas’ son, Keith Costas, also followed his father’s footsteps to the sports industry like his sister, Taylor. The graduate of the University of Kentucky, Keith, is an associate producer known for MLB Network’s MLB Tonight. For his service in MLB Tonight, Keith has won two Sports Emmys.

Though Keith is in the sports as an associate producer, he does not seem to like the paparazzi. He prefers to do his work silently, far from the bright limelight. Hence, Bob Costas’ son is not available on social media platforms like Facebook, Instagram, and Twitter. Moreover, he does not appear in public events with his celebrity dad, Bob Costas. So, there are not many photos of Keith Costas accessible for the public to date.

The name Keith’s meaning is from the battleground. Likewise, the masculine name Michael means who is like God?