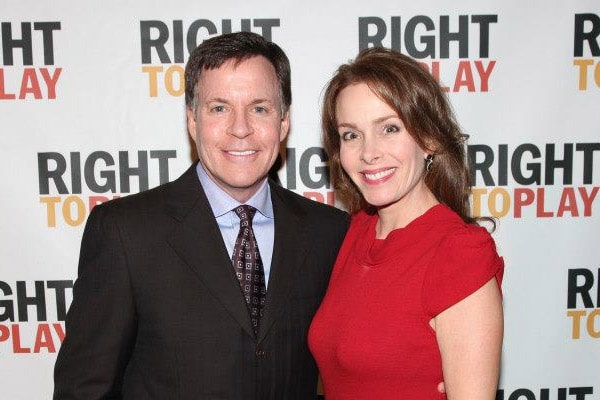 Bob Costas is one of the famous sportscasters of the American Broadcasting Industry. He is known for his over a decade long career as a sports analyst of the NBC Sports. Costas worked for NBC from 1980 to 2019. The former prime-time host of eleven Olympic Games from 1992 to 2016, Bob is currently continuing his work for the MLB Network covering his favorite sport, baseball.

The winner of several Emmy Awards, Bob Costas, married twice in his lifetime. His first marriage was with Carole Krummenacher from 1983 to 2001. Currently, Bob Costas is enjoying his marital life with his second wife, Jill Sutton. Here, know everything that you might be unknown about Bob Costas’ wife, Jill Sutton Costas.

Married To Bob Costas Since 2004

The sixty-eight-year-old broadcaster, Bob Costas, dated the Illinois State University grad, Jill Sutton, for a couple of years. There are no details available for the public regarding where and when the couple met. However, according to various sources, Bob took the wedding vows with his long-time girlfriend, Jill Sutton, on  14 March 2004.

Aforementioned, Sutton is the second wife of the sports commentator. Before getting hitched with Sutton, Bob Costas was married to Carole Krummenacher. The former pair married in 1983. However, due to various unrevealed marital issues, they could not continue their relationship for long. As a result, Bob and Carole ended their marriage with a divorce in 2001.

As for now, Bob seems to be committed to his present wife, Jill Sutton. The pair often attends the public events together. Unlike his previous partner, Bob never hesitates to show his lady, Jill, in the significant sporting events that he covers. Seeing Bob and Jill’s chemistry, Bob’s fans speculate that his current marriage will last forever.

Since Bob married Jill Sutton, the two do not seem to have adopted or given birth to children together. However, Jill Sutton became a proud step-mother of Bob Costas’ two talented kids from his previous marriage after getting married to Bob.

Both Bob Costas’ children seem to be following in their father’s footsteps in the American Entertainment Industry. Taylor and Keith are successful associate producers and winners of Sports Emmys. Bob Costas’ daughter, Taylor, is famous for being an associate producer on NBC’s coverage of the 2012 Summer Olympics. Similarly, his son, Keith, is the assistant producer on MLB Network’s MLB Tonight.

Though the step-children of Jill Sutton are living independently in the present, they visit her frequently. Plus the Costas family is very secretive concerning their private life.

Her Parents Are Very Concerned About Bob

Jill Sutton’s parents, Don Sutton and Sue Sutton have a close relationship with their son-in-law, Bob Costas. The famous real-estate couple, Don and Sue, are very concerned about the husband of their daughter.

Almost every fan of Bob Costas is well-known about his pink eye conjunctivitis infection in his eyes during the 2014 Sochi Olympics. Unfortunately, Bob acquired some minor eye infection in Russia, which worsened later, making his left eye swollen shut and both eyes as red as the old Soviet flag. So, at that time, Matt Lauer temporarily filled in for him that night.

Well. Bob’s red eyes were not just a concern for Bob and his family only. His in-laws were also worried at that time. Bob’s father-in-law, Don, told The Pantagraph that everything was well while Bob left. However, as soon as they saw Bob on the day the Olympics began, they felt something was wrong. So they texted their daughter, and she replied it was a bacterial infection.

Bob is really a fortunate guy as he has got such a loving wife and caring in-laws in bonus.

The native New Yorker who called St.Louis home for decades, Bob and his wife Jill Sutton currently reside in their 4,534-square-foot mansion in Newport Coast, California.

Jill and her husband, Bob, purchased their lovely California house in 2013 for $4.7 million. Their residence in the gated community of Crystal Cove has four bedrooms, 5.5 bathrooms. It lies on a corner lot up a hill from the Pacific Ocean. Additionally, there is a fantastic salt water pool and landscaping in the middle courtyard.

It’s been sixteen years now since Bob and Jill are officially together. And the lovely pair still has many more years to go.