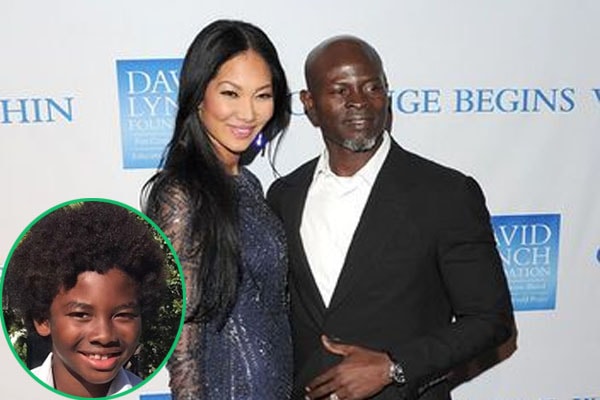 The Guardian Of The Galaxy star, Djimon Hounsou’s son Kenzo Lee Hounsou was born on May 30, 2009. Djimon dated model Kimora Lee from 2006 to 2012. With his relationship to an ex-girlfriend Kimora, they had Kenzo as their first child. The two separated a long time back. However, Kenzo still enjoys an abundance of love from his parents. His parents decided to co-parent him.

There are many times when a child has to go through a lot of hardship after their parent’s separation. However, it doesn’t seem to be in the case of Kenzo. He is having a great time with his older siblings.  Kenzo’s family album is full of pictures with his half-siblings enjoying party to his birthday celebration. It seems he is showered with full of love from all members.

Djimon’s Son Kenzo is adorable and friendly with everyone. Some evidence to support that is the fact that Kenzo is notable in every beautiful moment with his mother and half-siblings. He was there in Ocean, Christmas celebrations, and in every sphere, he cordially makes his involvement in the new environment. Kenzo’s half-siblings sister Aoki Lee Simmons have wished his 9th birthday stating her pleasant feelings to have such brother in her life. It seems Kenzo is lovely as every sister wish to have.

The actor, Djimon came from a village, Benin which is his birthplace. With all his success in Hollywood, he still visits there. Djimon Hounsou’s son Kenzo Lee was there to accompany him. He has shared a photo of father-son duos on his Instagram sharing a yogurt together. He looks adorable, doesn’t he?

It is very crucial for every parent to provide love and support to their children. Even though the couple has separated, they have tried their best to provide a good environment for their son, Kenzo. It is evident in the fact that the pair have appeared together on the first day of his school.

Kenzo is a Japanese word. It means ‘Wise and Intelligent’. Lee is the English middle name meaning ‘dweller by the wood’.